Had sex without a condom or any other contraceptive? Have you missed your period? Or doubting if you are pregnant? Then, this article is for you. Surf through this article to get to know the early signs of pregnancy and about when you can have your pregnancy test.

Contents
I Missed My Period
I Am Having a Vomiting Sensation or Have Actually Vomited
I Had Unprotected Sex
I Have a White Discharge From the Vagina
I Have Severe, Sudden, Lower Abdominal Pain Similar to Menstrual Pain
I Am Having Frequent Visits to the Restroom or Having Frequent Urination
I Am Feeling Tired
I Have Sore Breasts, or My Breasts Are Increasing in Size
I Have Slight Bleeding or Spotting
I Have Food Cravings, or I Am Starting to Dislike My Favorite Foods
I Am Having Mood Swings or Irritation
When Should I Take My Home Pregnancy Test?
Can I Test for Pregnancy in a Hospital? 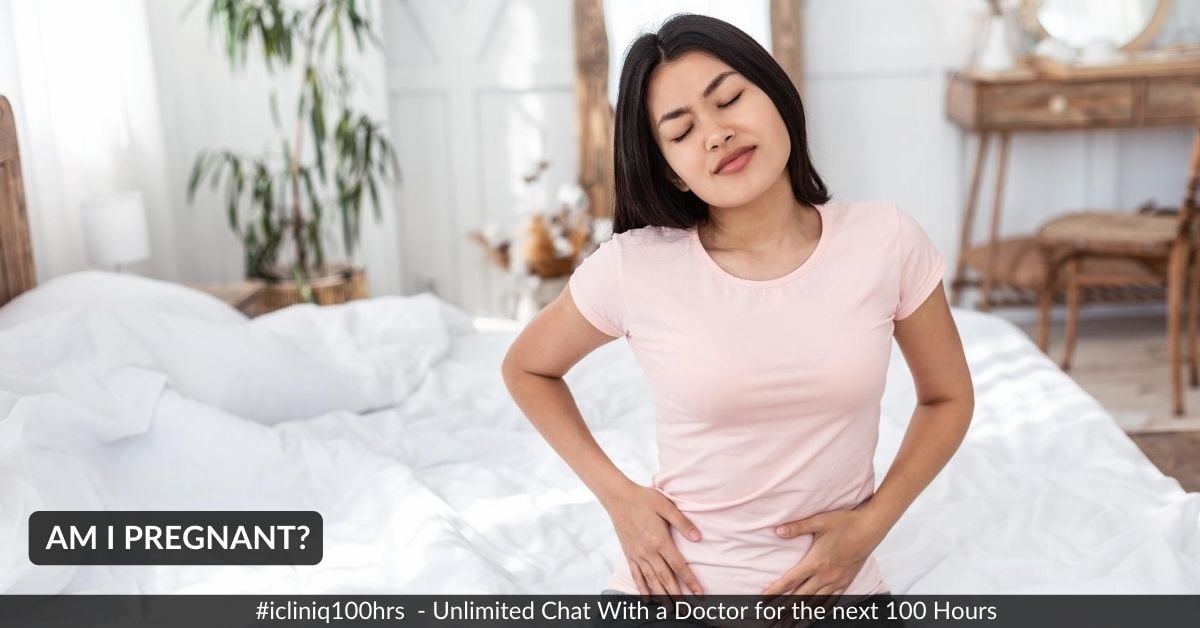 Am I pregnant? Well, this is a question that has come into every woman’s life at one point or another. You might have one now or might have had it a few days back.

Pregnancy tests can only confirm pregnancy if it happens so. However, there are also a few signs and symptoms that occur in a woman's body during the early stages of pregnancy which can be beneficial in clearing your doubt, at least to some extent. This article is about to clear or confirm your suspicions, whatever the case may be.

I Missed My Period.

It is the most common symptom for a woman who is pregnant. Be aware that sometimes even if you are not pregnant, you can have a missed period due to various reasons like stress, unhealthy diet, and thyroid problems. On the other hand, you can have slight bleeding or spotting, known as implantation bleeding, even when you are pregnant. It can be confused for a regular period.

I Am Having a Vomiting Sensation or Have Actually Vomited.

Like it is depicted in movies, It is pretty standard in pregnancy, but this is no definite sign of pregnancy as vomiting can be due to many causes like eating out, infection, malaria, typhoid, early hepatitis, or simply excessive eating.

Related Topics
I had miscarriage and ectopic pregnancy in the last six months. Is it endometriosis?
I am facing irregular periods from one year. Tell me some ayurvedic remedies.
Pregnancy test had two mildly visible lines, but it is now negative. Please suggest.

I Had Unprotected Sex.

I Have a White Discharge From the Vagina.

Although not a concern, white vaginal discharge, also called leucorrhea, is common during pregnancy and requires attention. It can be present in pregnancy due to increased levels of estrogen. However, it can also occur in other conditions, which can be easily distinguished from the discharge during pregnancy with the help of the appearance and smell. While you are pregnant, th white discharge appears thin or thick and odorless with milky white color. Clear and stretchy white discharge from the vagina is a sign of ovulation. Clear and watery discharge can be seen after strenuous exercise and is common to occur at any time of the cycle. In the case of yeast infection, the discharge is white, has the appearance of cottage cheese, and is associated with itching. Trichomoniasis, a sexually transmitted disease, exhibits thick green or yellow discharge accompanied by a foul smell.

Abdominal cramps similar to that of menstrual cramps can occur with pregnancy. Though many women mistake it for the start of periods, the bleeding associated with it is minor, and the pain is also comparatively less. In addition, pain in the lower abdomen can be due to an aborted pregnancy, an ectopic pregnancy, appendicitis, or just a urinary bladder infection.

It is a meaningful sign to note and is seen even before you experience a missed period. Since the blood supply increases during pregnancy, kidneys have to work harder to remove the waste from the blood. It, in turn, increases your urinary output. Frequent urination can also be seen in other conditions like increased intake of caffeine, urinary tract infection, anxiety, diabetes, interstitial cystitis, urinary incontinence, overactive bladder syndrome, renal stones, stroke, sexually transmitted diseases, etc.

I Am Feeling Tired.

I Have Sore Breasts, or My Breasts Are Increasing in Size.

Due to hormonal changes that occur during pregnancy, breasts increase in size and show tenderness on touching. There is also darkening and enlargement of nipples. You may feel that your bra seems tighter than before. However, breast tenderness is also seen before the menstrual cycle, and it improves during or after the cycle.

I Have Slight Bleeding or Spotting..

Slight bleeding or brown vaginal discharge can be an alarming sign for pregnancy because it is called implantation bleeding. It occurs when the fertilized embryo is implanted onto the wall of the uterus. It can also misguide women to be menstrual bleeding and think that they are not pregnant.

I Have Food Cravings, or I Am Starting to Dislike My Favorite Foods.

The constant feeling of hunger, craving for food, and food aversions like disliking your favorite food can occur during pregnancy. Few women also experience a metallic taste in their mouths. It is due to the hormonal changes which happen during pregnancy. Food aversions can also be a sign of an eating disorder that needs medical attention.

I Am Having Mood Swings or Irritation.

It is also a sign of pregnancy due to the changes in the hormone levels associated with pregnancy. However, it is also a premenstrual symptom that is present before the menstrual cycle.

When Should I Take My Home Pregnancy Test?

If you have any of the symptoms mentioned above, you can wait for about a week after you miss your period to take the home pregnancy test. It is ideal to do your pregnancy test only after a week of missing your period because only then will there be detectable levels of human chorionic gonadotropin (hCG) in your urine.

Can I Test for Pregnancy in a Hospital?

Yes, blood tests to detect the hCG level are available, which can be taken in the hospital. These are generally not preferred because it takes about two to three days to get the results. However, these tests can show the result early before a home urine pregnancy test, around 6 to 8 days after ovulation.

When trying to get pregnant, these symptoms are surely a piece of happy news for you. Get a pregnancy test and enjoy your new phase of life. If that is not the case and you are not trying for pregnancy, get yourself checked with a gynecologist at the earliest. All the complaints mentioned above should be taken seriously, and any delay in consultation can be harmful.

What Are the Early Signs of Pregnancy?

One can find out that they are pregnant with the following early signs
- Missed period.
- Morning nausea without vomiting.
- Tenderness of the breast.
- Feeling very tired.
- Frequent urination.

What Is Contraindicated Before a Pregnancy Test?

It is not allowed to take an excessive amount of water or liquid before a pregnancy test. Because excess fluid can impact the accuracy of the pr

How Early Does Morning Sickness Start?

What Are the Pregnancy Signs During the First Week of Pregnancy?

During the first week of pregnancy, some women can experience implant bleeding and feel mild cramping when the embryo attaches to the uterus wall. Pregnant women can also feel cramps in the abdomen,  lower back, or pelvic region.

Which Home Test Is Best to Find Out About Pregnancy?

Multiple pregnancy kits are available in the market, which provides accurate pregnancy results. The home test for pregnancy is done by using a few drops of urine, preferably morning urine, which is placed in the kit and left aside for five minutes, which shows accurate results.

Which Test Is Used to Confirm Pregnancy?

Pregnancy can be confirmed by a blood test done in a health care professional's office or laboratory. It can detect even a small amount of HCG (human chorionic gonadotrophin) in the blood earlier than a urine test. The blood test done for pregnancy is about 99 % accurate.

When Is the Right Time to Confirm Pregnancy?

It is normal to have a swollen, tender, and sore breast during early pregnancy. The breast is usually sensitive to touch during pregnancy due to increased blood flow to the breast which can make it swollen and tender.

Why Would Women Get Negative Pregnancy Test Results?

What Can Cause Hidden Pregnancy?

Hidden pregnancy can happen when the pregnant women experience no symptoms or they are very mild, so it goes unnoticed. It is also common when a pregnant woman has an irregular period and if the pregnancy kit shows a negative result.

What Type of Cramps Indicate Pregnancy?

Pregnant women may experience mild cramps in the lower abdomen or the pelvic region at infrequent intervals. This can happen when the fetus implants in the wall of the uterus.

What Are the Causes for the Delay in the Periods?

My periods are irregular and not conceiving. Please help.

Query: Hi doctor, I have had a history of irregular periods and now I am failing to get pregnant. To highlight about my past, I started having my periods from the age of 14 and had irregular periods always. Sometimes, I had heavy flow for 7 to 8 days and sometimes it was scanty for only 2 days. I was put ...  Read Full »

Article Overview: Pregnancy is the time taken for a fetus to develop inside a woman’s womb. Sometimes, if more than one embryo develops inside the uterus at the same time, it is known as a multiple pregnancy. Read Article

Overview: Pregnancy is the time taken for a fetus to develop inside a woman’s womb. Sometimes, if more than one embryo develops inside the uterus at the same time, it is known as a multiple pregnancy. It typically lasts for 40 weeks from the last menstrual period (LMP). A woman can get pregnant th...  Read Article

Does sex during the date of period result in ectopic pregnancy?

Query: Hi doctor, I have a query about my period. My actual due date for my period was 28th of last month. I had unprotected sex on the 27th. I waited two days for my period and I took emergency contraceptive on the last minute to 72 hour. My period got delayed for eight days and got it on the 5th of thi...  Read Full »

Do you have a question on Pregnancy or Irregular Periods?