iCliniq / Answers / Paediatrics / Increased Thirst / Why is a child having increased thirst and urination?

Q. Is it normal for a child to have increased thirst and urination?

Answered by
Dr. Amit Modi
and medically reviewed by iCliniq medical review team.
This is a premium question & answer published on Feb 09, 2019 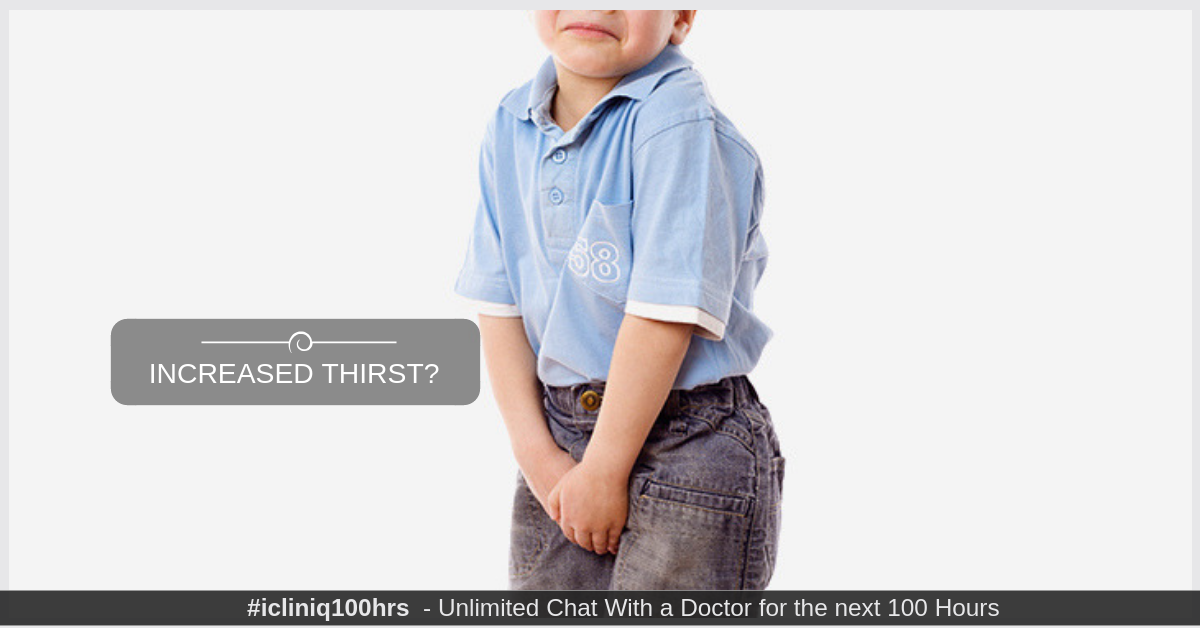 My son (4.3 years old, 21 kg, 109 cm), seems to have a tendency of increased thirst and urination for the past two months. Can I request you to review the below summary and attached reports to help him get well?

There are at least 3 to 4 occasions in past two months when he had drunk up to 4 to 5 liters of fluid in a day and urinates at least in an hour up to 3 to 4 times in an hour in the evening. These days he also seemed to have some amount of sweating and hiccups too. Couple of these occasions happened the next day after he has taken some outside food (like noodles). However, there was no loose motion or fever as such.

When he urinates 3 to 4 times in an hour, the urine volume is not that much always, neither there was any color or smell. We have also tested his urine routine twice, but nothing obvious was there (attached). We have taken him to a local doctor a couple of times, who did not find anything wrong clinically. His BP comes up as 90/60 and 88/60, while an instant sugar check (after 1.5 hours of light breakfast) shows 132.

He had reported 3 to 4 occasions of a headache and reeling of the head in the past two months or so. He did have some forehead injury (not fall) 3 months ago, which was reviewed by a doctor with antibiotics and the local dressing was done. He has taken two doses of Zentel syrup (5 ml) three months back. He has got two instances of cold, cough, fever in past two months, for which he had taken medicines like Calpol 250 mg (7.5 ml), Xyzal (3.5 ml), Montec LC Kid (4 ml), Ambrolite-S (5 ml) and Lupital (3 ml) since almost past one month.

Apart from the above symptoms, he seems to have moderate stomach pain (around naval chord) since today morning along with vomiting tendency and no appetite. We have given him Domestal Syrup (6 ml) twice, which although prevented vomiting, but he seems too tired, weak and unable to do his daily routine, etc.

The urine report uploaded seems to be absolutely normal (attachment removed to protect patient identity). And as suggested by the case history, he was never diagnosed with any chronic illness. Blood sugar and BP was always within normal limits. More amount of water intake is normally observed after having refined food like noodles or any oily food. And more water may lead to more urine output. It is good that you have already dewormed the child. Now, I would recommend a course of probiotics along with Multivitamins.

Give Enterogermina suspension 5 ml twice daily for five days. Syrup A to Z 5 ml once daily for 30 days.

I request your help to clarify a few follow up queries as below.

1. As we stay in a hot and humid place, we developed him the habit of drinking more water. He, in normal conditions, drinks up to 2.5 to 3 liters of water in a day. Is this fine from a medical perspective?

2. He had been on a dosage of Arbivit 3 Forte drop (0.5 ml) since childhood, which is increased to 0.75 ml due to frequent cold or a cough since past 7 to 8 months. Should he continue that? Or, is it recommended taking this only during winter?

3. He has been taking flu vaccine once in a year. Should it be stopped after he reaches 5 years?

2. Arbivit 3 is Cholecalciferol (Vitamin D3). No relation with immunity so may be stopped now.

3. Flu vaccines are to be taken every year, it will boost immunity against the flu. Prefer Quadra valent flu vaccine. Do not stop it. It must be continued till adulthood.

|
Related Questions:
When I urinate standing up, I notice foamy bubbles. Does it indicate a high protein content?
My brother's daughter has a problem of frequent urination. Please help us.
What does my father's blood sugar value suggest?

Is it true that my urinary problems cannot be cured?

Query: Hello doctor, Since the last 20 days, I am having urinary problems. My symptoms are poor urine stream, less volume of urine, the frequency of urination is more if I drink more fluids, urinary retention, pain in the area which is near the left side of the penis, and post void dribbling. My doctor to...  Read Full »

I have excessive thirst and frequent urination. Are these due to my medications?

Query: Hello doctor,I have been on Lithium for bipolar disorder for over 20 years. From a blood test two years ago, I noticed that my GFR was below 40. So, I gradually started switching from Lithium to Epilim to avoid further damage to my kidneys. But now, I experience excessive thirst and I wake up at nig...  Read Full »