Carcinoma of the esophagus is a rare but fatal carcinoma. It is more prevalent in males, and commonly affects the lower socioeconomic group. Read the article to know about its causes, types, symptoms, and treatment. 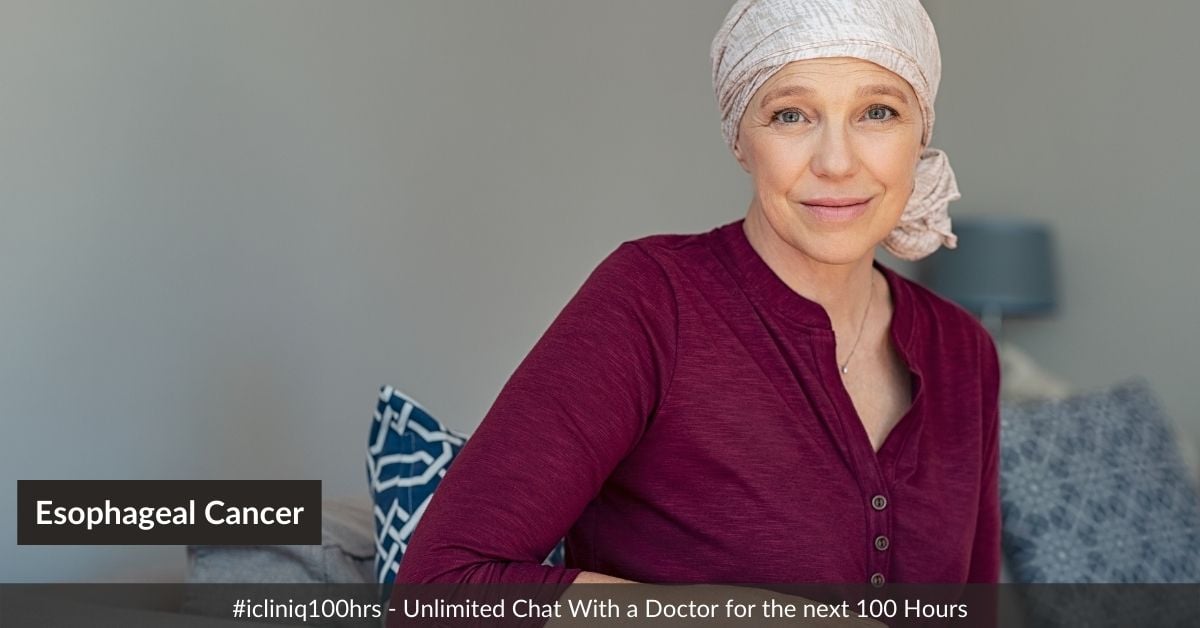 What Is an Esophageal Carcinoma?

What Are the Types of Esophageal Carcinoma?

Types of esophageal cancer are:

What are the Causes of Esophageal Carcinoma?

The causes of esophagus cancer are:

What Is the Predisposition of Esophageal Carcinoma?

What are the Clinical Features of Esophageal Carcinoma?

What Are the Stages Of Esophageal Cancer?

Stages of esophageal cancer may include:

Achalasia may have to be ruled out in malignant tumors due to the presence of ulcerations. Ulcerations are not commonly seen in benign tumors.

What are Investigations to be done for an Esophageal Carcinoma?

What are the Treatment methods for Esophageal Carcinoma?

One of the main goals of treatment is to stop or reduce the development of Barrett's esophagus by treating and managing acid reflux. Esophageal cancer is a treatable condition in most cases, but it is rarely curable. An overall 5-year survival rate in patients responsive to definitive treatment varies from 5% to 30%. The particular patient with a very early disease has a better possibility of survival.

3) Radiofrequency ablation, which applies heat to eliminate abnormal esophagus tissue. It may be recommended after endoscopic resection.

4) Cryotherapy utilizes an endoscope to use a cold liquid or gas to irregular cells in the esophagus. The cells are permitted to warm up and later are frozen again. The period of freezing and thawing destroys the abnormal cells.

What is Barrett's esophagus?

People who are more prone to acquire Barrett's esophagus are:

Does the Patient With Esophageal Cancer Feel Ill?

Yes, the patient feels ill due to a persistent cough. The patient also has chest pain, hoarseness of voice, loss of weight, and breathing problems. If the problem persists for a longer time, you have to contact your doctor immediately.

Is Esophageal Cancer an Aggressive Condition?

Cancer in the esophagus is a very aggressive condition. The main problem with this type of cancer is that no symptoms are expressed until cancer reaches a severe stage. The grade three cancer spreads more quickly and in an aggressive manner.

What Are the Risk Factors of Esophageal Cancer?

How Common Is Esophageal Cancer?

Where Does Esophageal Cancer Start to Spread?

The spreading of cancer begins in the esophageal walls and slowly enters the lymph nodes surrounding the esophageal region. Esophageal cancer then proceeds into a more complicated stage involving the lung, bones, liver, brain, and adrenal glands.

What Are the Symptoms of Esophageal Cancer?

In some patients, excessive burping can be an indicating sign of esophageal cancer or any other type of cancer. However, it is not possible to make a confirmatory diagnosis with the burping sign. If the patient is experiencing excessive burping, the patient has to check with the doctor to identify the exact cause.

What Are the Types of Esophageal Cancer?

How Is Esophageal Cancer Diagnosed?

Can Esophageal Cancer Be Identified in Blood Tests?

If the esophageal cancer is causing anemia due to the excessive bleeding from the tumor, in such cases, blood tests can be helpful for suspecting the condition of esophageal cancer. If you are confused about the diagnosis, you can get help from icliniq.com.

When Can the Esophageal Cancer Be Identified?

The condition of esophageal cancer can be identified only in the later stages. After the spreading of the disease starts, the symptoms become noticeable. Some patients are known to die within a year of diagnosis because the symptoms are usually subtle to be identified at an earlier stage.

Can Cancer in the Esophagus Be Cured?

It is not possible to completely cure the conditions. The symptoms can be controlled and managed in an effective manner if the treatment is started at an early stage. The average lifespan of the patients affected by esophageal cancer is about five years.

What Are the Treatment Options for Esophageal Cancer?

The most recommended treatment options for esophageal cancer are:
- Chemotherapy.
- Radiation therapy.
- Targeted drug therapy.
- Immunotherapy.
In most advanced stages of cancer, surgical methods would be helpful.

Is there any medicine to overcome the effects of alcohol?

Query: Hi doctor, I am contacting you regarding an uncle of mine. He is 40 years old. His health issues are related to alcohol (beer). He drinks quite a few times a week. When he starts drinking, he drinks a few liters before stopping. He also smokes, but only sometimes. He finds heavy breathing after ju...  Read Full »

Query: Hi doctor,My mother is suffering from well-differentiated squamous cell carcinoma. Her age is between 55 to 60. What treatment can cure her?  Read Full »

Do you have a question on Palliative Therapy or Barrett's Esophagus?