In rapidly urbanizing cities, it has become a regular phenomenon to have a post-monsoon surge of fever cases. Chikungunya is also one of them. Read the article to get to know about Chikungunya fever. 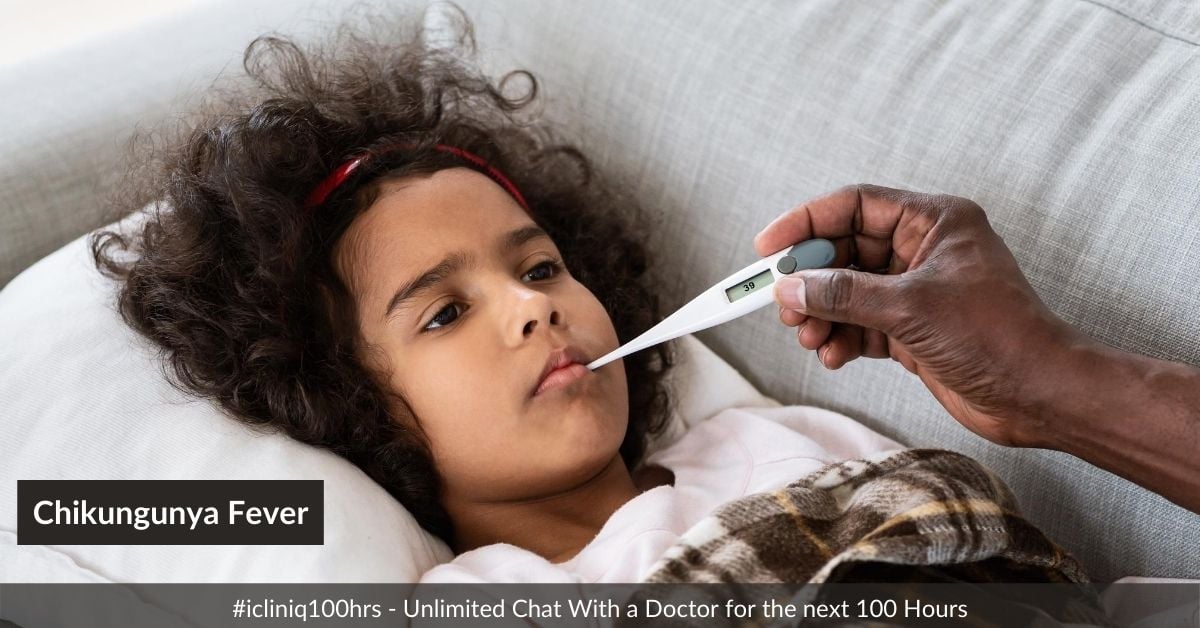 Fever has many causes, viral being one of them. Viral fever is prevalent during the change of seasons. Different viruses like the influenza virus, flavivirus, etc., can cause febrile illnesses. The viral infection can be acquired either through direct contact with the patient (droplet infection) or by a vector, as in the case of dengue and chikungunya, where one develops the disease by a mosquito bite.

What Is Chikungunya Fever?

Chikungunya is caused by the bite of the Aedes aegypti mosquito. It usually bites during the daytime, while malaria, a Plasmodium disease, occurs through the bite of the female Anopheles mosquito.

What Is the Distribution of Chikungunya Fever?

The Caribbean islands of America registered the first case of Chikungunya fever in 2013. Later, it then spread to different parts of the world. Since its first outbreak, countries of Europe, Africa, Asia, the Pacific ocean, and the Indian ocean have experienced sporadic attacks now and then. The risk of transmission of the virus increases with infected travelers moving from one country to another.

What Are the Signs and Symptoms of Chikungunya Fever?

How Is Chikungunya Fever Transmitted?

The most common transmission route of chikungunya fever occurs through the bite of mosquitoes. Aedes aegypti and Aedes albopictus mosquitoes are responsible for transmitting chikungunya fever, which can bite both during the day and night. When a mosquito bites an infected individual, the virus is transmitted to the mosquito. Eventually, the mosquito becomes infected, and when this infected mosquito bites another healthy individual, transmission occurs.

2. Transmission From Mother to Child:

There have been rare cases of mother-to-child transmission that occur during gestation. However, there is no evidence to support the transmission of the virus through breastfeeding.

Although theoretically, there has been supportive evidence regarding the spread of the chikungunya virus through blood transmission, there is no clinical evidence for the same.

How Is Chikungunya Fever Diagnosed?

What Is the Treatment for Chikungunya Fever?

How Can We Prevent Chikungunya Fever?

What Can I Do to Prevent the Spread of Chikungunya Fever?

If you have been diagnosed with chikungunya fever, do not allow mosquitoes to bite you, especially around the first week. The chikungunya virus will be available in the blood during the first week, and when a mosquito bites you, it can become infected. This infected mosquito can transmit the virus to another healthy individual and continue the transmission chain.

Chikungunya fever is a viral disease transmitted through mosquitoes. Despite no vaccination, the spread of the disease can be significantly controlled by preventing mosquito bites. When experiencing symptoms, reach out to a healthcare provider and get the best possible treatment. Also, avoid the bite of mosquitoes to prevent the spread.

What Is Chikungunya’s Incubation Period?

The incubation period is the number of days between the initial exposure of the pathogen and the consecutive development of symptoms. The incubation period of chikungunya fever is 3 to 8 days from the day of the bite of an infected mosquito. However, it can range from 1 to 12 days.

Who Is Prone to Chikungunya Fever?

People living or traveling to tropical and subtropical countries and people living in communities with compromised individual or community sanitation that increase the risk of mosquito breeding during an ongoing epidemic are prone to mosquito-borne infections.

What Is the Reason for Joint Pain in Chikungunya?

Once an individual acquires chikungunya, the body tries to fight off the viral infection and the virus by releasing certain chemicals called inflammatory mediators to attack the virus. This infection-inflammation process eventually ends up damaging cells of the joints, muscle, etc., resulting in inflammation of the joints.

What Foods Should I Avoid for Chikungunya?

What Long-Term Effects Does Chikungunya Cause?

The below-listed long-term health effects of chikungunya are pronounced in older patients and those with severe chikungunya.
- Chronic joint pain.
- Joint stiffness and swelling.

Yes. Practicing the range of motion exercises and strengthening exercises can improve joint flexibility and help subside joint pain to some extent.

When Will Chikungunya Fever Subside?

Fever due to chikungunya usually subsides within 7 to 10 days of onset.

What Does Untreated Chikungunya Do?

Being a viral infection, chikungunya does not have a permanent cure as of now. However, to relieve symptoms such as headache, fever, joint and muscle ache pain killers, and fever medications might be used along with rest and plenty of water.

How Can I Quickly Cure Chikungunya?

Chikungunya resolves on its own and does not have any treatment to cure it. The following measures might be beneficial in fast recovery:
- Adequate rest.
- Drinking plenty of fluid.
- Paracetamol and painkillers to treat pain and fever.
- Having nutritious foods.

To date, there is no medicine available to cure chikungunya permanently. But medicines such as Paracetamol, Ibuprofen, and Naproxen help relieve fever and joint or body pain and provide symptomatic relief.

Which Is More Concerning, Dengue or Chikungunya?

When compared between dengue and chikungunya, dengue can be more concerning due to its longer fever duration, chances of dengue hemorrhagic fever associated with bleeding in the nose, stomach, gums, skin, dengue shock, and death in extreme conditions.

Can an Affected Person Spread Chikungunya by Touch?

If I had six Paracetamol tablets and seven of Mefenamic acid, how bad can it be?

Query: Hello doctor, I am 18 years old. What if I have six tablets of 500 mg Paracetamol (Crocin advance) and seven tablets of 500 mg Mefenamic acid (Ponstan forte) at one go (within five minutes)? How bad will it be? What will the side effects be?  Read Full »

Article Overview: The recent speculation about the spread of the Nipah virus in a Southern State in India has surely brought jittery feelings among everyone. In this article, I will take you through the Nipah virus, its mode of transmission, symptoms, precautionary measures, and treatment. Read Article

What is Nipah Virus (NiV)? Nipah virus is a zoonotic virus that belongs to the family of viruses called Paramyxoviridae and genus Henipavirus. It is capable of spreading from an infected animal to a person and is mainly transmitted from the Fruit bats which are also known as flying foxes. These Nip...  Read Article

Do you have a question on Aedes Mosquito or Viral Fever?