Rhinovirus infections cause upper respiratory tract infections and are usually not life-threatening. This article explains about it in detail.

More than 50 years ago, the same rhinovirus was isolated from people with a common cold and associated symptoms. The common cold caused due to rhinoviruses is of little direct medical consequence, but it does impact the daily life of affected people.

Rhinoviruses are predominantly responsible for cold-like illnesses. They are also known as human rhinoviruses (HRV), which belong to the Picornoviridae family and Enterovirus genus. Three strains of human rhinoviruses are discovered as of now, they are, HRV-A, HRV-B, and HRV-C. These rhinoviruses are known to cause upper respiratory tract infections (infections pertaining to the nose, nasal passages, sinuses, pharynx (throat), larynx (voice box), and mouth). But they also exacerbate any existing lower respiratory tract diseases such as asthma, chronic bronchitis, cystic fibrosis, pneumonia, etc. 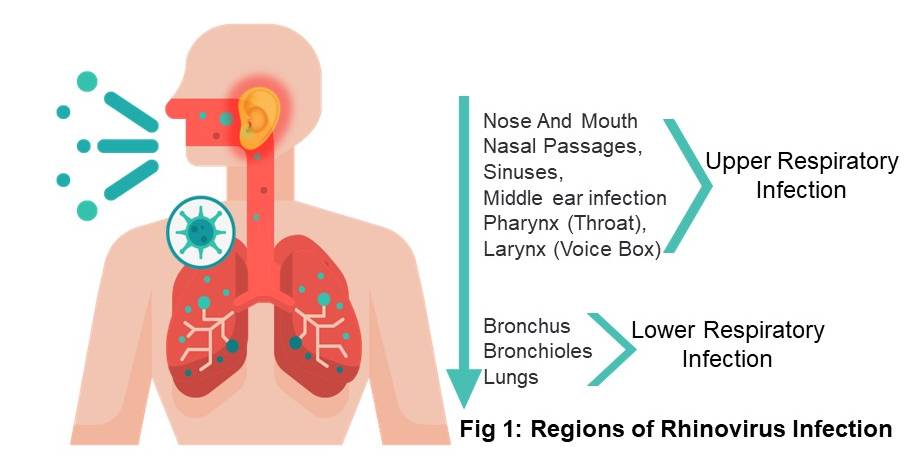 What Are Rhinovirus Infections?

Though the most commonly caused rhinovirus infection, the common cold, does not cause serious medical consequences, it causes an extensive expenditure in the form of hospital visits, medical care, absenteeism at the workplace, and frequently missing schools. Up to 80 % of the affected people remain symptomatic, and most rhinovirus symptoms are mild and self-limiting. 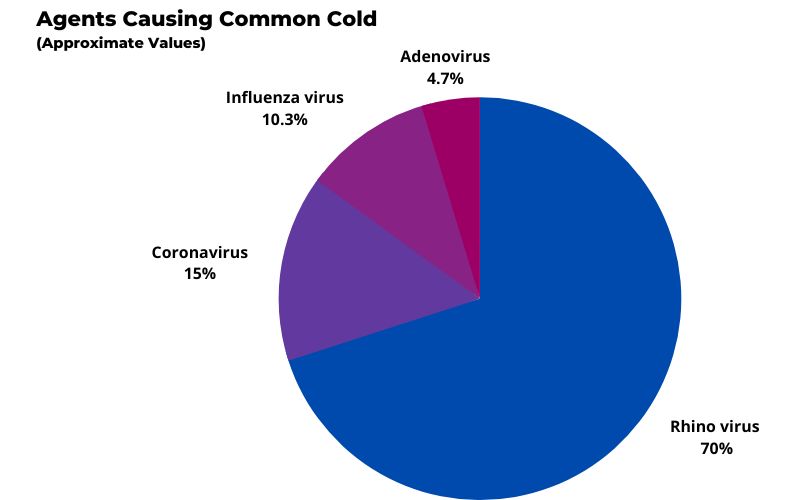 Symptoms of common cold include,

The symptoms usually start 2 or 3 days after the viral exposure and resolve after a week or two with or without treatment. The infection easily gets transmitted from one person to another through respiratory droplets whenever an infected person sneezes or coughs. Touching contaminated surfaces and frequently touching the nose and mouth can also transmit the infection.

Though these do not cause serious complications in an otherwise healthy individual, they can progress to cause complications such as bronchitis or pneumonia in people with a weakened immune system or an existing respiratory illness.

Rhinovirus is regarded as both the chief (but rare) causative organism and co-existing organism in middle ear infections. It causes inflammation of the respiratory epithelium (lining), which in turn leads to eustachian tube obstruction. This leads to secondary bacterial infection.

Infection of the air sinuses (especially maxillary sinus) by the rhinovirus causes inflammation of the inner lining of the sinus cavities. This alters the structure of the sinus and causes obstruction. As a result, bacteria such as Streptococcus pneumoniae and Haemophilus influenzae get entrapped and cause bacterial sinusitis.

Croup most commonly affects children aged up to 5 years, especially in the fall. All viruses that cause the common cold cause croup. In this disease, the child’s airways, including the voice box (larynx) and windpipe (trachea), swell, and the child coughs with a high-pitched barking sound and also makes squeaky breathing noises (called stridor). Fortunately, their conditions improve within a week or so. If the airways swell considerably, it becomes difficult for the child to breathe, and eventually, bluish discoloration around the mouth appears due to lack of oxygen.

Though human rhinoviruses profoundly cause upper respiratory tract infections only, in rare cases, the infection can extend beyond the throat region (oropharynx) and cause complications like pneumonia. It is characterized by typical symptoms of bacterial pneumonia such as wheezing, difficulty breathing (dyspnea), fever, chills, cyanosis (bluish discoloration of the skin, nail, and eyes, due to decreased oxygen), etc. Mostly in children hospitalized for pneumonia or bronchitis, the human rhinovirus can coexist along with other causative organisms.

Kids with human rhinovirus infection-induced wheeze during their initial years of life are at an elevated risk of asthma in their later childhood. It can also exacerbate existing asthma in both children and adults.

Chronic bronchitis and emphysema are together known as COPD. This condition makes it difficult for the lungs to breathe due to damage to the lung structures such as air sacs (alveoli) and bronchi (small branched tubes within the lungs). This damage is irreversible. Frequently bacteria are involved in COPD, which can be exacerbated by rhinoviruses in immunocompetent individuals.

Similar to asthma and COPD, rhinovirus exacerbates cystic fibrosis too. This is a genetic disorder wherein the properties of mucus are altered. Usually, mucus (bodily secretions for its functioning) is thin and slippery, but in people with cystic fibrosis, it becomes thick and gluey, which makes it difficult for them to breathe when it builds up inside the airways. Human rhinovirus C is associated with exacerbations of cystic fibrosis.

What Are the Symptoms of Rhinovirus Infections? 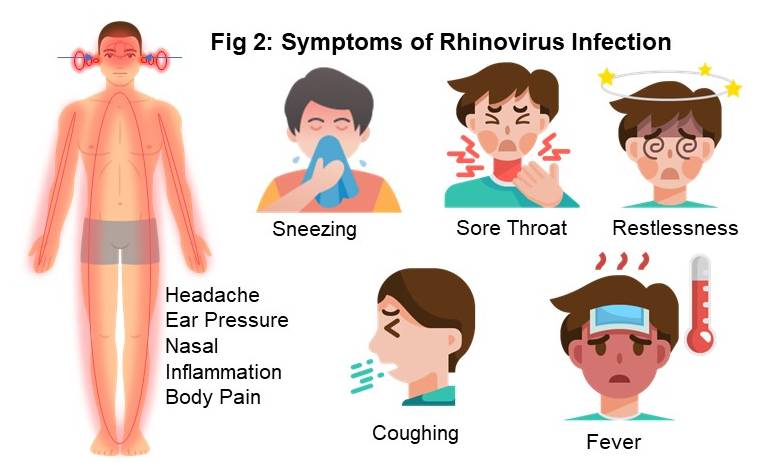 How Can Rhinovirus Infections Be Treated?

Common cold, the most common rhinovirus infection, is usually mild and self-limiting. Hence, only supportive care is needed to relieve the symptoms. The following measures are advised;

Make sure to consult a pediatrician for children with rhinovirus infection-like symptoms. Although not advisable, adults can use over-the-counter medications, but children should take medicines prescribed by the pediatrician.

How Can Common Cold Be prevented? 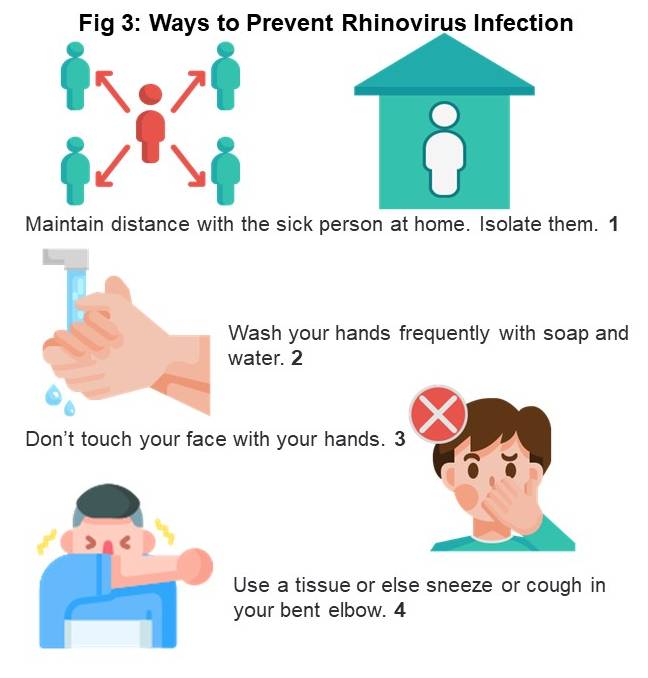 There is no permanent cure for a common cold or other rhinovirus infections, and no vaccines have been discovered until now. But fortunately, it is mild and resolves on its own after a stipulated period. But if you have a weak immune system, be informed that rhinovirus infections cause serious respiratory complications. It is always better to prevent one.

Do you have a question on Rhinovirus Infection or ?