COPD a disease of the lung as a direct result of its irritation due to smoke, dust, and other pollutants. Read about its causes, symptoms, diagnosis, and treatment in this article. 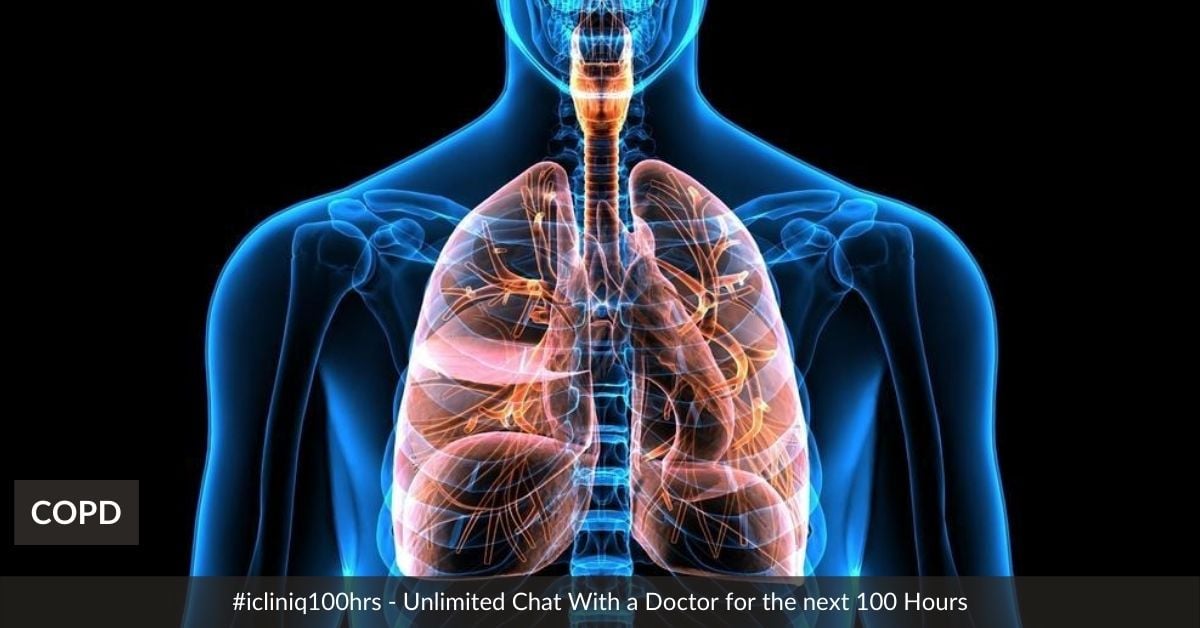 COPD is an inflammatory lung disease that causes a progressive obstruction of airflow. Long-term exposure to irritants leads to COPD, mainly cigarette smoke, polluted air, toxic fumes, and dust. Although smokers are at high risk, this condition can affect non-smokers too.

The symptoms of COPD include breathing difficulty, severe productive cough, and wheezing. COPD increases the risk of the person developing heart problems, lung cancer, and many other serious conditions. This condition can be treated with proper management. With prompt treatment, most people live a symptom-free life with a reduced incidence of other associated diseases.

What Are the Forms of COPD?

The two forms of emphysema are:

What Are the Signs and Symptoms of COPD?

People usually do not experience any symptoms of COPD until significant lung damage has occurred. This damage only worsens with time and exposure to cigarette smoke.

What Are the Causes of COPD?

Some of the most common causes of COPD are:

How Does COPD Affect Your Lungs?

When you inhale, air travels to your lungs through the windpipe two large bronchi. In the lungs, these bronchi divide into numerous small bronchioles. Thes bronchioles end on tiny air sacs called alveoli. The walls of these air sacs are very thin walls and full of small capillaries. Oxygen present in the air that travels to the air sacs goes into these capillaries and gets mixed with the bloodstream, and the carbon dioxide is exchanged and exhaled out. 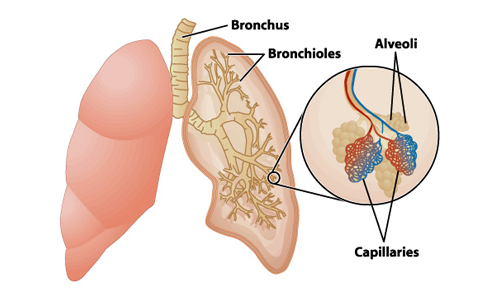 The natural elasticity of the bronchial tubes and alveoli helps the lungs to force air out of the body. COPD makes these structures lose the elasticity, which results in some amount of air trapped in the lungs on exhalation.

The factors that increase the risk of COPD are:

What Are the Possible Complications of COPD?

The following are some of the possible complications of COPD:

How Does a Doctor Diagnose COPD?

Diagnosis is by a combination of the following:

What Are the Treatment Options for COPD?

Treatment involves a combination of lifestyle changes and medicines.

If you are a smoker, this could be a direct cause of COPD. Quitting smoking and taking an antioxidant-rich diet will help prevent worsening and exacerbation of symptoms.

If there is exposure to fumes at your place of work, be sure to wear a special mask to protect yourself.

If you suffer from asthma, or frequent respiratory infections, flu, etc., it is advisable to stay away from cigarette smoke, be it first or second hand.

What are the stages of COPD?

The stages of COPD, according to the Global Initiative for Obstructive Lung Disease (GOLD), include:
- Stage I - Mild - No symptoms but the lung function starts to decline.
- Stage II - Moderate - Symptoms like shortness of breath upon exertion.
- Stage III - Severe - The symptoms become severe.
- Stage IV - End-stage - The quality of life is impacted due to breathing and other respiratory problems.

What stage of COPD requires oxygen?

COPD patients usually need oxygen supplementation in the end-stage. Such patients cannot carry out daily chores without getting extremely tired and exhausted.

What are the common triggers for a COPD attack?

Cigarette smoke and smoking, cold and humid weather, air pollution, respiratory infections, and dust are some of the most common factors that can trigger a COPD attack.

What are the organs that get affected by COPD?

The structural and functional parts of the respiratory system and lungs are majorly affected by COPD, but apart from them, COPD also increases the risk of heart diseases, neurological problems, and skeletal defects.

How does a COPD cough sound?

COPD patients have a cough that produces a considerable amount of sputum or mucus. When they try to breathe, they wheeze or have a whistling sound.

Can COPD affect the eyes?

A study showed that some COPD patients show the demyelinating type of optic nerve involvement, otherwise called optic neuritis. This can lead to a complete or partial loss of vision.

What chemicals have said to cause COPD?

Exposure to chemicals, such as coal dust, isocyanates, silica dust, fumes and dust of cadmium, etc., have been said to cause COPD. Inhaling these chemicals along with smoking can severely increase the risk.

Do all smokers get COPD?

Smoking is considered to be the major cause of chronic obstructive pulmonary disease, but this does not mean that all smokers will get COPD. Some COPD patients have never smoked in there life.

How long can a person live with severe COPD?

I have chronic cough even after quitting smoking before years. What could be the reason?

Query: Hello doctor, I am 53 years old, and have quit smoking 19 years ago. I still have a chronic cough. Each specialist tells me something different. The pulmonologist told me it was asthma, and another doctor said it was acid reflux disease. Now they are telling me it is COPD. I do not have diminished...  Read Full »

Are the antibiotics prescribed to my dad correct?

Query: Hi doctor, My father is 76 years old. He has been in ICU for two days as he was diagnosed with LRTI (CAP - community acquired pneumonia). Four years back he had TB. His vitals such as BP, temperature, renal and heart tests are fine. He is not responding to antibiotics and his condition is deteriora...  Read Full »

Do you have a question on Inflammation Of Membrane Covering Lungs or Chronic Obstructive Pulmonary Disease?