iCliniq / Health Articles / Atherosclerosis / Who Is Prone to Get a Stroke?
ADVERTISEMENT
Neurological Health Data Verified

Stroke: Who Can Get It?

Stroke is the leading cause of death worldwide. There are many risk factors for stroke. Read this article below to know more. 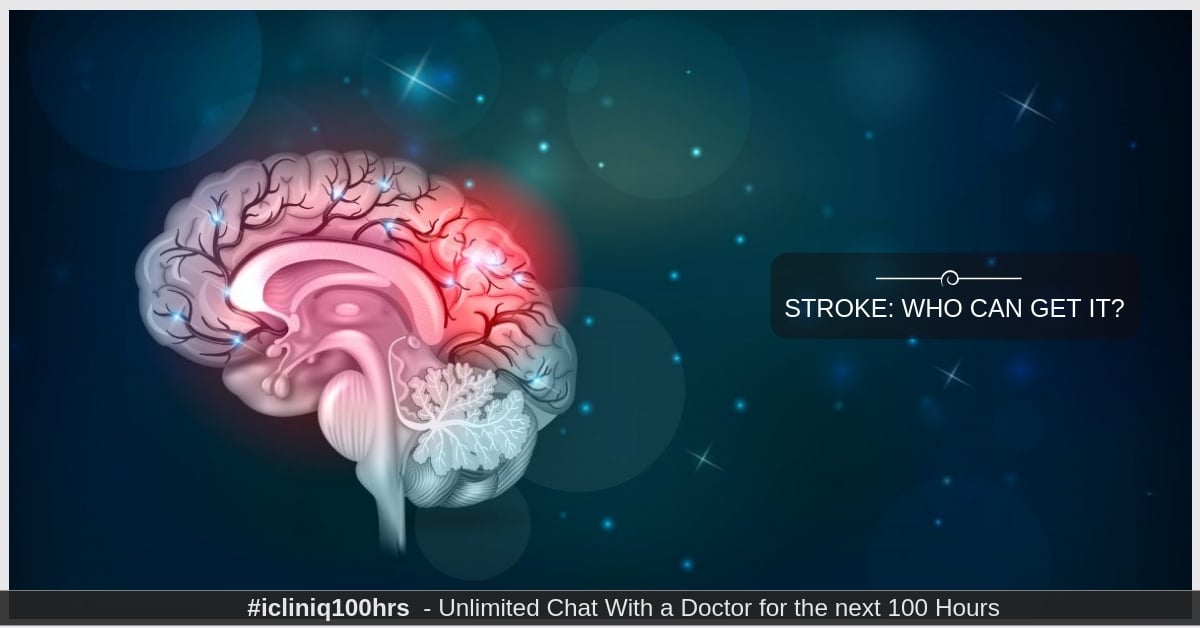 Stroke, known as cerebrovascular accident (CVA), occurs due to poor blood flow to the brain, thereby causing improper functioning of the affected part. There are numerous risk factors for stroke. Some very common medical conditions and habits may predispose one to stroke, especially if the condition is uncontrolled. People who have these risk factors are more commonly known to have strokes. Some of these risk factors are preventable or controllable, while others are something that one cannot do much about, accordingly called modifiable and non-modifiable risk factors.

What Are the Signs and Symptoms of Stroke?

The most common signs and symptoms of a stroke are listed below.

What Are the Most Common Risk Factors for Stroke?

What Are the Risk Factors For Stroke That Can Be Prevented?

The following are factors that can be prevented and avoided.

What Are the Risk Factors for Stroke That Cannot Be Prevented?

Below are some conditions and risk factors that are unavoidable and cannot be prevented:

What Are the Other Risk Factors?

Apart from the avoidable and unavoidable risk factors, there are some environment-related factors too, which are discussed below.

Stroke is one of the commonest diseases occurring around the world. It is also among the top causes of both mortality and morbidity. Therefore everyone needs to know whether they are at risk of stroke. This disease can be prevented by avoiding its risk factors.

Who Are Most Likely to Get a Stroke?

What Reduces the Risk of a Stroke?

The risk of a stroke can be reduced by the following:
- Healthy lifestyle.
- Taking green and leafy vegetables.
- Controlled diabetes mellitus.
- Normalizing blood pressure.
- Avoiding alcohol and smoking.

Can We Feel a Stroke Coming?

A person can experience the following symptoms when they have a stroke:
- Sudden weakness of the face.
- Liability of the arm or leg.
- Severe dizziness.
- Balance problems.
- Difficulty walking.
- Confusion.
- Head pain.
- Muscle loss on the left side of the body.
- The vision is blurred.

What Kinds of Foods Cause Stroke?

Consuming too much of the following food can increase stroke risk:
- Fatty foods.
- Foods that are oily.
- Food with a high amount of LDL and HDL.
- Carbohydrate-rich foods.
- Sugary foods.

Can the Brain Heal After a Stroke?

The brain does heal after a stroke because of the changes during stroke recovery that include reduction in the inflammation of the brain, cell growth, and cell repair.

Yes, after several studies, it has been deduced that stroke does lead to a shortening of the life span of anywhere between 1.5 years to 5 years.

There are several food items that promise to reduce the risk of stroke but the incident itself is inevitable, provided the individual is prone to or at risk for stroke due to underlying etiological factors. Mentioned below are a few of the food items that may prevent stroke.
- Fish.
- Flaxseeds.
- Egg.
- Omega-rich foods.

What Does a Waking Stroke Refer To?

When the patient wakes up after sleeping, an array of symptoms of stroke that were absent before the patient went to bed is referred to as a waking stroke.

Can a Stroke Go Untreated?

Strokes must be treated immediately, and ten hours is the maximum time that a stroke can be unfolded and left untreated before irreversible changes occur.

No, there is no blood test that can detect the presence or incoming of a stroke. Blood tests are done to understand the symptoms and causes of a stroke.

What Does a Silent Stroke Refer To?

A silent stroke is also referred to as a cerebral infarction wherein the patient is not aware that they have undergone an episode of stroke within them.

MRI shows stroke and brain changes. Is it due to untreated sleep apnea?

What is the management for pulmonary embolism?

Query: Hi doctor, Around 45 days ago, I noticed blood in sputum. I consulted a doctor. He advised me to do a CT scan. The report suggested the pulmonary embolism. In the treatment, they gave me blood thinner injection and tablets. They examined me and found out that there are no blood clots in any part of...  Read Full »

Is stroke with bleeding serious or without bleeding?

Query: Hi doctor, I got a stroke but I do not know how to explain it. Twice I was bleeding along with the stroke. One type of bleeding was chronic and the other one was acute. I would like to know which type of bleeding is dangerous? And also explain the reason for the same.  Read Full »

Do you have a question on Atherosclerosis or Warning Signs Of Stroke?