Strokes are very common nowadays thus it is very important to understand the pathophysiology and types of stroke. Read the article to learn more about it. 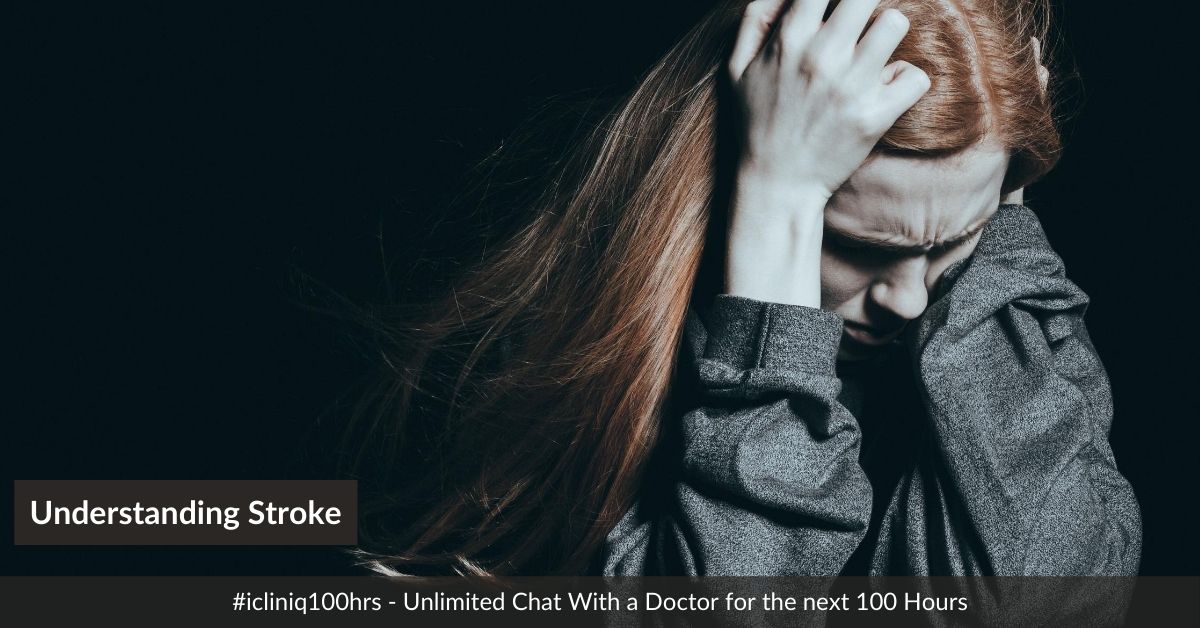 Stroke is something that most people realize by its common symptom like blood blockage causing brain attacks or ischemia. Stroke is one of the common problems which affects elderly people and, not so infrequently, even youngsters.

One of the most common questions asked by the affected patient to the doctor about stroke is “what does that mean? What has happened inside the body?” The idea of these next few words is to tell what happens inside the body when a stroke occurs.

Strokes occur when the blood vessels get ruptured or block the blood supply, resulting in less oxygen and insufficient nutrient supply to other internal organs. A stroke is a medical emergency that needs urgent medical attention to avoid serious life-threatening conditions.

What Is Brain Attack and Heart Attack?

A stroke, to make it more easily understood, may be called a “brain” attack (drawing on the meaning and panic that is understood by the masses when someone utters the term “heart” attack). The meaning is not exactly very different.

Heart attack occurs when the blood vessels supplying the heart are affected, and the blood flowing through them is insufficient to maintain the survival of the heart.

What Are the Signs and Symptoms Associated With Stroke?

Following are the symptoms that occur during a stroke -

What Happens in the Brain During a Stroke?

The brain is one of the most important organs of the body and belongs to the central nervous system. The brain receives signals and allows the body movements, and it also controls the emotions and language and stores the memory of an individual.

What Are the Different Types of Strokes?

There are three types of strokes -

It is a type of stroke which is caused by the bursting or leaking of the blood vessels into the brain.

Ischemic stroke occurs when there is a blockage in an artery that supplies blood to the brain, thereby causing insufficient blood and oxygen supply to the brain.

Transient ischemic attacks are defined as a blockage caused by plug formation, and it gets reversed by itself.

Things That May Help to Understand More About Strokes -

What Happens in the Blood Vessels Which Result in Strokes?

For example, let's consider a water pipe through which water is flowing. If the water freezes at a certain point and the ice formed stops the flow of water, this might be understood as a thrombus.

If there is some trash on the pipe and it comes to another point and gets stuck at another point away from where it has entered the pipe in the first place, the water flow reduces. This may be understood as emboli.

When hard water flows through a pipe, salt always deposits on the wall of the pipe. When the wall is sufficiently coated with these minerals, the obstruction may occur due to a narrow lumen, and you tend to get a reduced flow of water through the pipe. This may explain to you the phenomenon of atherosclerosis.

Stenosis may be understood if one considers a pipe that is thinner at one of the points in its course, thereby allowing only a limited flow of water through your tap.

When a pipe bursts, the water is lost, and again nothing comes through the tap. That is a hemorrhage.

The first four mechanisms cause a reduced supply of oxygen to the brain and are called ischemic strokes. The final mechanism is, of course, known as cerebral hemorrhage.

Amongst ischemic stroke, the duration of symptoms leads to another classification. Suppose the symptoms occur for a very short duration, like 15 minutes to a day, and after that, a full recovery of symptoms is noted. In that case, the episode is known as a transient ischemic attack. It is usually a less well-known warning sign that should make the patient aware that something is wrong and that evaluation is in order. Again, the duration is short because the incident is short-lived, and the blood supply and, therefore, the oxygen supply to the brain is restored before any damage can happen (remember, brain cells cannot regenerate).

Alternatively, if the symptoms last longer than 24 hours or if the neuro radio imaging (computerized tomography scan or magnetic resonance imaging of the head) shows any changes, the damage has likely happened to the brain tissue. And this condition is known as the infarction of the brain.

Finally, the vessel may have ruptured, causing a cerebral hemorrhage, thereby causing a stroke. This usually happens when the blood vessel is weak at some point, if the pressure is too high on the vessels or if the patient is prone to bleeding (naturally or due to medicines for another condition, for example, Warfarin).

Strokes are one of the common problems. People with high blood pressure, diabetes, heart disease, family history, or with smoking and drinking habits are at greater risk. However, it can be prevented by healthy lifestyle moderation like healthy eating habits, physical workouts, and maintaining cholesterol, blood pressure, and blood sugar.

What Will Happen When You Have a Stroke?

A stroke occurs when there is a loss of blood supply to the part of the brain. Without oxygen in the blood, the cells of the brain will start dying within minutes. This may lead to weakness, paralysis, and problems with balance or coordination. The other symptoms may include pain, numbness, fatigue, or burning and tingling sensations.

What Are the Different Types of Strokes?

The different types of stroke are:
- Ischemic Stroke (Clots) occurs when there is an obstruction in the blood vessel supplying blood to the brain. About 87 percent of all strokes happening are ischemic strokes.
- Hemorrhagic Stroke (Bleeds).
- TIA (Transient Ischemic Attack).
- Cryptogenic Stroke.
- Brain Stem Stroke.

What Are the Alarming Signs of a Stroke?

The alarming signs of a stroke may include:
- Sudden numbness or paralysis in any part of the body
- Numbness or a feeling of "pins and needles" sensation anywhere in the body.
- Confusion.
- Loss of balance and coordination.
- Vision problem, or blurred vision in one or both eyes.
- Muscle stiffness.
- Loss of sensation in any part of the body.
- Dizziness.
- Behavioral changes.
- Severe headache that usually is unlike headaches in the past.
- Inability to speak or slurred speech.
- Failure to understand speech.
- Memory loss.

Which Is the Most Suitable Treatment for Stroke?

The stroke treatment is based on the type of stroke. For ischemic stroke or transient ischemic attack, medicines or surgery or both can be suggested, and for hemorrhagic stroke, surgery is advised. Anticoagulants like Aspirin and Clopidogrel can be given for retarding and inhibiting the coagulation of blood. Procedures to treat stroke are:
- Catheter-mediated intra-arterial thrombolysis, angioplasty, and stent placement will widen the blocked artery.
- Carotid endarterectomy will correct stenosis (narrowing) in the common carotid artery or internal carotid artery.
- Aneurysm clipping will treat a balloon-like bulge of an artery wall known as an aneurysm.
- Coil embolization will treat an aneurysm that may have caused the hemorrhagic stroke.
- AVM (arteriovenous malformation) removal surgery.

Can the Brain Repair on Its Own After a Stroke?

Study shows that the brain possesses an extraordinary ability to heal by itself after a stroke. This brain's ability is known as neuroplasticity, which is why many stroke survivors go on to make astonishing recoveries.

What Is Considered a Massive Stroke?

Do Stroke Victims Sleep a Lot?

Excessive sleep after stroke is usually a good sign of recovery. While sleeping, the brain will get a chance to process stimulation, remove toxins, and restore the mental battery. It is usual for stroke patients to sleep a lot, especially when the brain is healing and rewiring. But in contrast, poor sleep can slow recovery, lead to depression and memory problems.

Is Eating Bananas Good For a Stroke Patient?

New research has revealed that eating bananas every day can help prevent heart attacks and strokes. Bananas are rich in potassium, which can stop fatal blockages from occurring and inhibit the thickening and narrowing of arteries.

Which Fruit Is Good To Prevent Stroke?

Is It Good For Stroke Patients To Have Coffee?

Researchers have found that drinking coffee lowers the risk of getting a stroke. Drinking about 2 to 4 cups of coffee per day is connected with reduced stroke risk. Coffee changes the physiology in the blood vessel and alters blood flow to prevent hypertension. It also decreases the possibility of harmful blood clots due to the cholesterol-reducing property in it.

Which Is the Quickest Way to Check For a Stroke?

The quickest way to check for stroke is the FAST test (Face, Arms, Speech, Time) which is performed to help recognize stroke symptoms:
Face: When the person is asked to smile, it may be a transient ischemic attack (TIA) or stroke if one side droops.
Arms: When the person is asked to hold both arms in front of the body, it may be a TIA or stroke if one arm slips.
Speech: When a person is requested to repeat a simple sentence, it may be a stroke or TIA if the speech is slurred or garbled.
Time: Seek medical help if any of these symptoms occur.

How Does a Stroke Feel?

- Intense pressure and pain in the head.
- The face may have a tingling and numbing sensation, and one may feel an extreme weakness or even paralysis in the face.
- Blacking out.
- A warm feeling behind the ears.

At What Time of the Day Do Most Of the Strokes Occur?

Strokes most frequently occur between 8 AM and noon and occur while sleeping or on awakening.

Kindly suggest treatment for unilateral paralysis of the diaphragm.

Query: Hi doctor, What health implications have been observed with a unilateral paralysis of the diaphragm? I have had a plication performed, but it failed and is back to the original issue. Currently, I am suffering from shortness of breath, chest pain with dizzy spells and increased heart rate. I am on P...  Read Full »

MRI shows stroke and brain changes. Is it due to untreated sleep apnea?

When will my grandmother come out of coma?

Query: Hi doctor, My 82 year old grandmother is in a coma from the past 15 days. The doctors are suspecting a brain stroke. I am attaching all her reports. When will she come out of the coma?  Read Full »

Do you have a question on Stroke or Paralysis?