One of the most common respiratory complications that can occur after a surgery is atelectasis. Read the article below to know more about atelectasis.

You breathe with the help of branching tubes that run through the lungs. When you inhale air, it moves and reaches the lungs through the windpipe. This windpipe progressively branches out into smaller tubules and ends in very small air sacs called alveoli. These alveoli exchange the oxygen in the air that you breathe in with the carbon dioxide produced in the body. For this to happen, the alveoli must be inflated. But, when these alveoli get deflated or filled with alveolar fluid, either the entire lung collapses, or a lobe of it does, which is called atelectasis.

It can occur as a complication of other respiratory problems, such as lung cancer, cystic fibrosis, chest injury, pulmonary edema (fluid in the lung), or due to breathing in a foreign object. It is one of the commonest breathing complications a person experiences after surgery. If the patient has a pre-existing lung disease, this condition worsens it and makes breathing extremely difficult. The treatment depends on what caused it and how severe it is. This condition is not usually life-threatening, but it needs immediate treatment sometimes.

What Is the Difference Between Pneumothorax and Atelectasis?

A collapsed lung is also called pneumothorax. This collapse happens when air is stuck in between the inner chest wall and outside of the lung. This air shrinks the lungs and eventually leads to its collapse. This collapsed lung can also deflate the alveoli, resulting in atelectasis.

What Are the Signs and Symptoms of Atelectasis?

Atelectasis can result in no to mild to severe symptoms. This depends on the areas of the lung that are affected, and the speed with which it develops. There are usually no symptoms if only a few alveoli are involved. When many alveoli are affected, oxygen does not get effectively exchanged, which leads to a deficiency of oxygen in the body. The signs and symptoms that might suggest that your body is not getting enough oxygen are:

What Are the Types of Atelectasis?

Based on the causes, atelectasis is divided into:

What Are the Causes of Atelectasis?

Anything that blocks the air passage can cause obstructive atelectasis. It includes:

The causes of nonobstructive atelectasisare:

What Are the Risk Factors of Atelectasis?

Some factors that might increase the risk of atelectasis are:

How Does a Doctor Diagnose Atelectasis?

The doctor can diagnose this condition with the help of a chest X-ray. But, you may need to get other tests done to know the cause and severity:

What Are the Treatment Options for Atelectasis?

1) Physiotherapy - It is used to treat obstructive atelectasis, especially after surgery. The body is moved in different positions, and the chest is tapped and vibrated to loosen and drain mucus.

2) Breathing Exercises - Exercises that make you take deep breaths are done. Deep breathing helps the alveoli to open up.

3) Bronchoscopy - While looking for any foreign object that might be blocking your airway using a bronchoscope, the doctor might also remove the cause.

4) Drainage - The doctor might drain fluid or air collected between your lungs and chest wall if the cause is pneumothorax or pleural effusion.

5) Surgery - In some cases, a lobe or small area of the lung needs to be surgically removed. This is only done if all the non-surgical treatment options fail.

What Are the Complications of Atelectasis?

The following are some possible complications from atelectasis:

How Is Atelectasis Prevented?

You might be able to prevent atelectasis if you:

What Are the Causes of Atelectasis?

Injury to the lungs due to trauma, compression, or a tumor can cause atelectasis.

Is Atelectasis a Very Serious Condition?

Not all cases of atelectasis are life-threatening. However, when a massive amount of lung tissues are damaged, then the body does not receive enough oxygen through the blood. When this happens, then the condition is serious.

Who Can Get Atelectasis More Easily?

You are at a higher risk of getting atelectasis if you have a chronic smoking habit, COPD (chronic obstructive pulmonary disease), lung cancer, or if you have had recent lung surgery.

How Does Atelectasis Look In a CT Scan?

In CT (computed tomography) scans in cases of atelectasis, the volume of the affected lung is seen to be reduced, which appears as increased opacity or attenuation of the lung.

What Are the Treatment Measures Done to Better Atelectasis?

Postural changes while lying down, in a way that your head is lower than your chest, can help. Deep breathing exercises can help with increasing the lung volume, and specific devices can help with assisted coughing that prevents the accumulation of fluid in the lungs.

Can Atelectasis Cause Back Pain?

Sudden sharp pain in the chest due to atelectasis can radiate to the back and shoulders.

How Long Does It Take for a Person to Completely Recover From Atelectasis?

In mild cases, atelectasis does not require any treatments. If the causes are diagnosed and treated properly, the person can quickly recover from atelectasis. However, it is a long-term illness in many.

What Are the Symptoms of Atelectasis?

Can Atelectasis Be Seen on an X-Ray?

Yes, atelectasis can be seen on an X-ray when the opacity of the lungs are increased. This means that the volume of the lungs is decreased.

A proper diagnosis of the causes of atelectasis can help with the treatment and cure.

Other than ultrasound, how can Down's syndrome be diagnosed?

Query: Hi doctor, I am 26 weeks pregnant. Yesterday, I went for an ultrasound scan named targeted imaging for fetal anomalies. Other than hypoplasia of nasal bone, everything is normal. I need an expert opinion regarding advanced tests of ultrasound or amniocentesis, karyotyping or any ultrasound scan to ...  Read Full »

What can be done for adhesive otitis with SOM?

Query: Hello doctor, I am 33 years old, male. I am diagnosed with right adhesive otitis with left SOM. Already mastoidectomy was done in right ear nine years back and two myringotomies in right ear when I was 4 and 7 years of age. I have CT scan report, audiometry, impedance test results.  Read Full »

Can tuberculosis infect organs other than the lungs?

Query: Hello doctor, My recent chest x-ray showed some suspicious infiltrates in the lung. I am currently under thyroid cancer treatment. I got two CT scans done for both neck and chest. I have attached both reports here. Please help me in clarifying few terms which I did not follow. I would like to know, ...  Read Full » 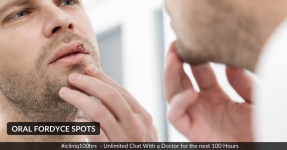 What Are Oral Fordyce Spots?

Do you have a question on Atelectasis or ?