It is natural to be anxious about getting a surgery done under general anesthesia, as you will be in a state of a medically-induced coma. Read the article to know the uses, possible side effects, and what to expect when you are administered general anesthesia 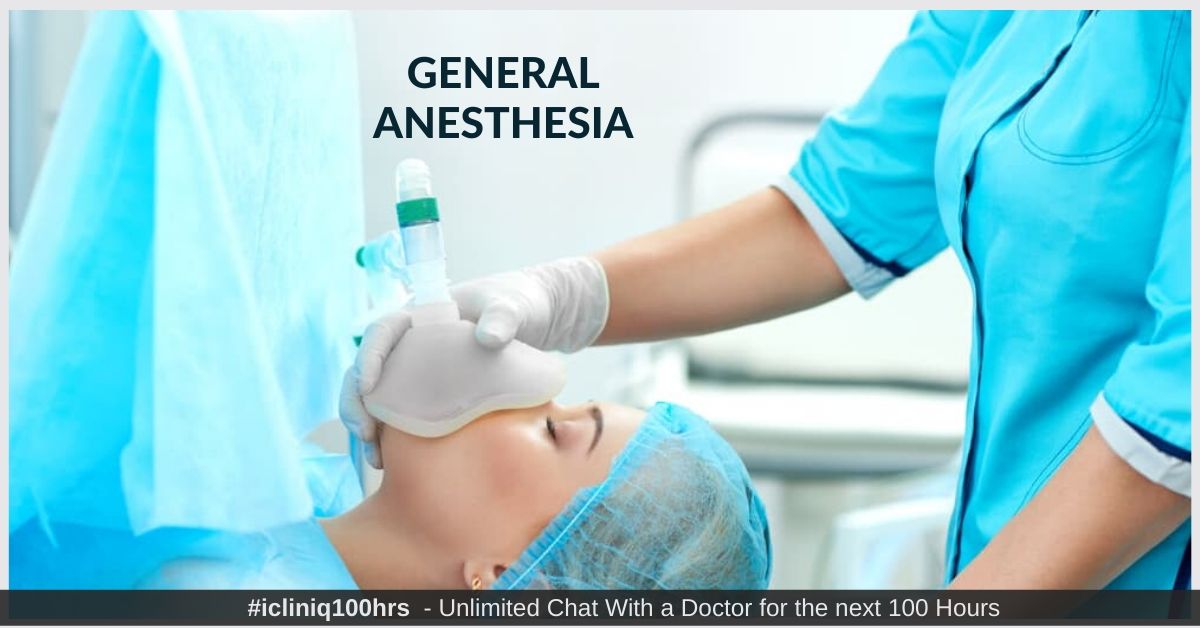 The use of certain drugs to achieve reversible coma or loss of consciousness, long enough for surgeons to operate, is called general anesthesia. How these drugs produce their effect is still not understood properly. Here, the patient is not put to sleep, but they are in a state of medically induced coma.

These drugs when inhaled or administered through the veins, make the patient unresponsive and unconscious. When under the effect of general anesthesia, the patient will not be able to feel pain and might also temporary memory loss. Anesthetic drugs are administered only by an anesthesiologist, and he or she also monitors the patient's vital signs and breathing throughout the procedure.

In 1842, Crawford Long used Diethyl ether to perform the first painless surgery, and since then, general anesthetics are being widely used.

Why Is General Anesthesia Administered?

The type of anesthesia used is decided based on the type of surgery, overall health, and the patient’s choice. Surgeries that might include the following factors are usually done under general anesthesia:

What Are the Advantages of General Anesthesia?

The advantages of using general anesthesia are:

What Are the Side Effects of General Anesthesia?

Even though there are many possible side effects of general anesthesia, it is relatively safe if administered properly. The following are the common side effects:

The side effects that occur immediately or shortly after administering the anesthetic are:

What Are the Factors That Increase the Risk of Side Effects?

In very rare cases, patients become aware of what is going on during the operation. Almost 1 in every 1,000 people regain consciousness, but cannot move, talk, or talk to their doctor. The patient normally does not feel pain, but it can result in long-term psychological problems like post-traumatic stress disorder (PTSD).

For more information on general anesthesia, consult an anesthesiologist online.

How Much Time Is Required for General anesthesia to Get Out of Your System?

After a surgical procedure where general anesthesia was administered, most people will wake up in the recovery room instantly after the procedure. However, they may remain groggy for a few hours afterward. The person’s body might take up to a week to recover from the medicines from his or her system. The fact is that most people will not notice any effects of the general anesthesia after 24 hours.

What Are the Stages of General anesthesia?

Will General anesthesia Make Me Sleep?

Yes, general anesthesia will make you sleep. General anesthesia is a type of treatment that uses certain medicines that puts you into a deep sleep. Due to this process, you will not be able to feel any pain during the whole surgery. After you get administered with these medicines, you will also not be aware of what is happening around you.

Will I Be Able to Breathe Under General anesthesia?

No, you will not be able to breathe under general anesthesia. This is because of the anesthesia’s suppressing effect, which is also known to relax the breathing muscles to a limited extent. So these patients are intubated and are made to breathe artificially with the help of a mechanical ventilator.

How Do Patients Wake Up From anesthesia?

After the completion of the surgery, the patient will wake up in the operating room. Here, the anesthesiologist will be the one who starts transitioning you from the sleepy state to the normal wakeful state. He or she will gently tap your cheeks and call out your name to ensure that you are awake to a gloomy state.

How Is General Anesthesia Injected in My Body?

General anesthesia is a type of anesthetic procedure that is used to induce unconsciousness during the surgical procedure. The medicine is administered either through a breathing mask or tube, which is known as an inhalation route or given through an intravenous (IV) line. A breathing tube is usually inserted into the windpipe (trachea) to maintain proper breathing during surgery.

What Are the Types of Surgery That Require General anesthesia?

General anesthesia is the anesthetic method of choice that is being used for all major operations. Few examples of such surgeries are knee replacement surgery, open-heart surgery, transplantation surgeries, and all the procedures that require a loss of consciousness during the procedure.

Why Do People Cry After anesthesia?

There is a medicine known as Sevoflurane. This medicine is a gas that is being commonly used in order to keep patients in sleep. This medicine is noted to be the reason why people cry after anesthesia. However, various studies suggest that crying after anesthesia can also be due to the combined effects of various factors, the stress of surgery, pain, and the effects of various medicines used.

What Should a Person Eat After anesthesia?

A person who has completed his or her surgery is recommended to take foods rich in healthy fats. The reason behind this is that healthy fat helps the person’s body to absorb all the vitamins that are present in fruits and veggies. The foods that are rich in healthy fats are as follows:
- Nuts.
- Fish.
- Olive oil.
- Avocados.
- Coconut oil.
- Seeds.

Should I Be Scared of Getting General anesthesia During My Surgery?

Do People Dream While Under anesthesia?

Dreaming during anesthesia is generally unrelated to the depth of anesthesia in almost every case where general anesthesia is being used. Dreams of sleep are suggestive that anesthetic dreaming occurs most commonly only during the recovery phase, where the patients are sedated to stay in the sleep state.

Does General anesthesia Cause Pain?

What Are the Don’Ts Before anesthesia?

Does Anesthesia Shorten My Lifespan?

In normal, young, and healthy individuals, there is no scientific evidence-based study that proves that anesthesia can shorten a person’s lifetime. But a recent clinical study has shown that deep induction of prolonged anesthesia, as measured with the help of bispectral index monitoring, was noted to be associated with increased one year rate of mortality among middle-aged and elderly surgical patients.

What Are The Risks Associated With General anesthesia?

The following are the various risks associated with general anesthesia:
- Temporary confusion and memory loss, and these are more common in elderly surgical candidates.
- Dizziness.
- Difficulty in urinating.
- Bruising or soreness at the intravenous drip.
- Nausea and vomiting.
- Shivering and a feeling of cold sensation.
- Sore throat, due to intubation of breathing tube.

What Happens When General anesthesia Is Administered?

General anesthesia essentially puts the person in a medically induced coma. It is not similar to normal sleep. Drugs used in general anesthesia makes the patient unresponsive and unconscious. They are normally administered intravenously (IV) or in the inhalation route through the breathing tube. Under general anesthesia, in addition to the inability to perceive pain, the person might also have amnesia.

What Are the Drugs Used for General anesthesia?

The following are various drugs that are commonly being used for general anesthesia:
- Barbiturates.
- Benzodiazepines such as Diazepam, Lorazepam, and Midazolam.
- Etomidate.
- Ketamine.
- Propofol.

What Are the Long Term Complications of General anesthesia?

Complications associated with general anesthesia are quite rare. It is noted only in the people belonging to the category of elderly and high-risk patients. The following are the commonly noted complications:
- Postoperative delirium.
- Cognitive dysfunction.
- Memory loss is noted to last longer than a few hours or days.

How to Prepare Myself Before General anesthesia?

Before a surgical procedure that involves the usage of general anesthesia, the main instructions you should follow are the avoidance of the intake of any form of food and fluids at least 12 hours before the induction of general anesthesia. Your doctor might also instruct you to avoid the intake of your certain daily medicines that you would have been taking for other health concerns such as diabetes and hypertension.

I am worried about palpitations.Please advise.

Query: Hi doctor, Last Wednesday night, I got palpitations. I took Rivotril 5 mg and slept. Next day I rushed to my physician. He prescribed me Ciplar 10 mg tablet and advised me to take one tablet daily after breakfast. Palpitations did not happen from past three months. My doctor advised me to continue...  Read Full »

What does it mean when there is back pain, arm stiffness, and grip loss?

Query: Hello doctor,My daughter has been experiencing severe back pain, arm stiffness with grip loss, shooting pains down legs when the heel is put to floor and vision blurring when sitting in the car for long periods, for over two years following spinal anesthesia for C-section. MRI scans show nothing and...  Read Full »

Is it necessary to shave beard before a general anesthesia?

Query: Hello doctor,I am scheduled next week for out-patient surgery to have a malignant tumor removed from my bladder via a catheter inserted into my urethra. Before that, the anesthesiologist will administer a general anesthetic as well as a muscle-relaxant to keep me from kicking when under. The procedu...  Read Full »

Do you have a question on General Anesthesia or Loss Of Consciousness?