Dry, itchy, or flaky scalp can be a sign of dandruff or fungal infection. Dandruff is also the leading cause of hair fall. Learn about ways to get rid of it. 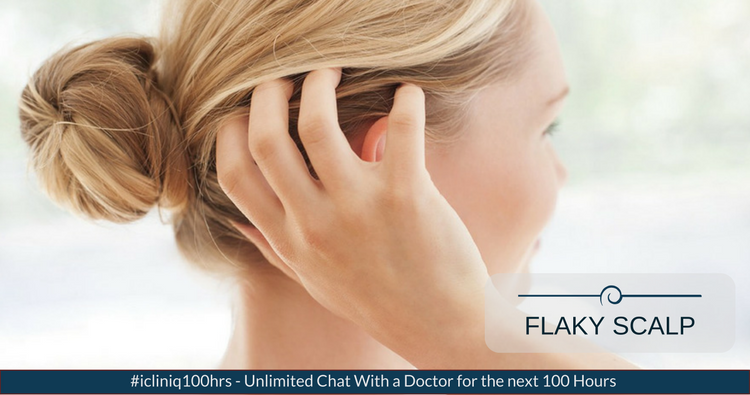 Scaly scalp or flaky scalp is raised, tiny flakes of skin in the scalp. The common causes of scaly scalp are cradle cap, dandruff, seborrheic dermatitis and psoriasis.

Cradle cap is also known as infantile pityriasis or Infantile seborrheic dermatitis. This condition is common within the first 2 to 3 months of life.

I have oily dandruff and dry hairs with hair fall. How can I be treated?
Area between thigh and abdomen is dark. Please suggest a remedy.
Why am I having itching and irritation near genital area?

Scaling due to dandruff (Pityriasis capitis) in the scalp is the most common at about 20 years of age.

Seborrheic dermatitis and dandruff may be considered as the same condition, but it differs in the disease severity spectrum.

Seborrheic dermatitis is characterized by,

Psoriasis of scalp is common.

Can I use Cotaryl cream for dry and flaky skin?

Query: Hi Doctor, I am suffering a disease called Ichthyosis. It is genetically causing dry skin problem and fish like scales. Kindly help me with a solution for this.  Read Full »

I have pain in the penis after frequent sex. Please suggest medications.

Query: Hello doctor, I am a 36 year old male. I am married since six years. I went abroad for a project for two months. There were no sexual relations in these two months. I just came back from the project and am having sex twice a day for the past three days. Now, I have a slight pain in the tip and ba...  Read Full »

Is my hair fall due to shampooing daily and dandruff?

Query: Hello doctor,I have had a dandruff problem for very long. So, I started shampooing my hair every day. Even then skipping even a single day of shampooing leaves my hair full of dirt and makes it completely oily. And an itchy scalp is always there no matter what I do. I have started losing a lot of ha...  Read Full »