iCliniq / Answers / Infertility / Bleeding During Pregnancy / I am bleeding during pregnancy. Should I discontinue Heparin injection?
ADVERTISEMENT
ADVERTISEMENT

Q. I am bleeding during pregnancy. Should I discontinue Heparin injection?

Answered by
Dr. Balakrishnan. R
and medically reviewed by iCliniq medical review team.
This is a premium question & answer published on Feb 01, 2018 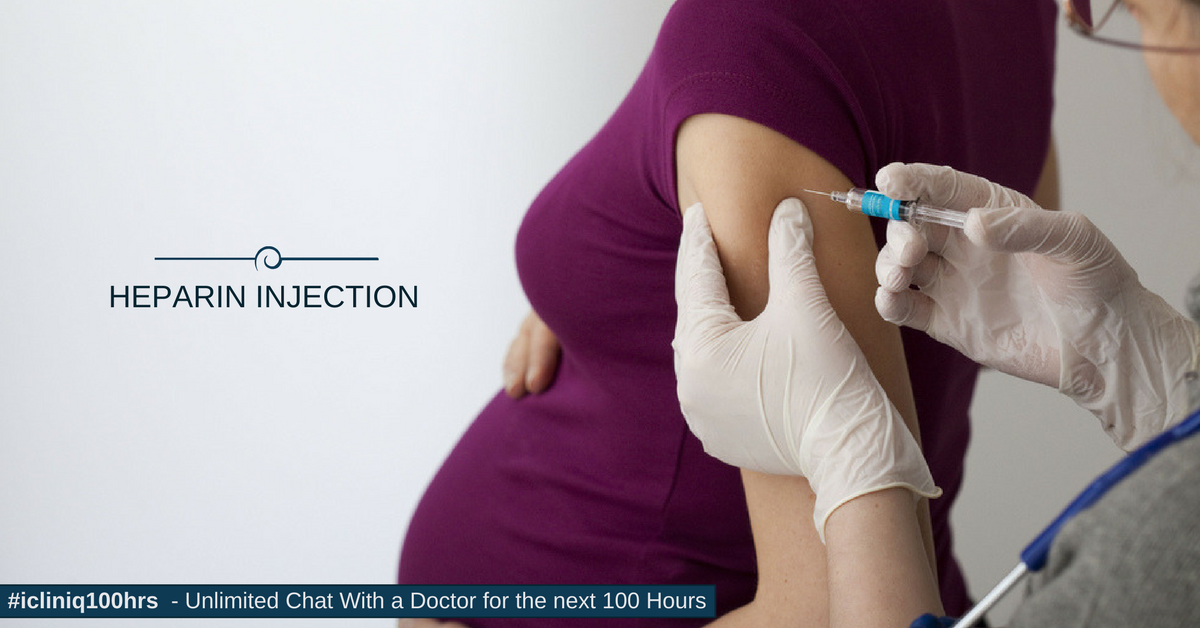 I am eight weeks and six days pregnant and am currently on LMWH (Inj Innohep 40 mg) as tests prior to pregnancy indicated a positive ANA. I have a history of a previous mid-trimester miscarriage which was believed to be due to an incompetent cervix, and so have been on vaginal progesterone pessaries since I tested positive this time around. Last month, I had some PV bleeding. Scans at that time did not show an SCH. A week after the onset of the bleed, progesterone levels were found to be 6 and so I was started on tablet Duphaston 10 mg twice a day and a shot of Inj Proluton Depot 250 mg was given.

Sadly, I developed light bleeding again last night and USG showed a small 1.1 cm collection suggestive of an SCH. I was given a shot of Inj. Proluton Depot 250 mg before being discharged from the ER. I am doubtful as to whether I should continue taking the Inj Innohep while I have the bleed or if I should stop. My rheumatologist thinks I should continue on with the LMWH in spite of the bleeding in view of positive immunological markers. However, My RE thinks otherwise. He says the previous miscarriage was not due to APS (the baby was fine when I went into labor) and so he did not feel there to be an absolute indication for Heparin for this pregnancy. But what about the positive ANA? Or the Lupus anticoagulant?

Pre-pregnancy tests were as follows

The rheumatologist wanted a repeat panel done and so the tests were done while I was pregnant.

In view of these test,

Should I be continuing on with the LMWH? Should LMWH be continued even with the presence of an SCH or vaginal bleeding? Does the increase in ANA indicate a definitive immune response from my body to the pregnancy? Can Lupus become positive just weeks / few months after it was found to be negative?

How are you doing? I know it is a tough situation for you to decide. Do not panic. Relax, you are doing fine. Let me answer you one by one.

40 mg dose of LMW Heparin once a day is a prophylactic dose. Twice a day is a therapeutic dose. So just by getting once a day dosage, will not affect the hemorrhage. Just have a follow-up scan after a week to compare the size. If you have any severe abdominal pain or active fresh red bleed. Then stop the injection. If you are also on tablet Ecospirin, better stop it, as it causes more bleed.

About the antibody levels. This is a reason why blood is tested for the antibodies before. A false high value can be due to the hormone imbalance in pregnancy. Do not bother about the rise. It will fade off.

Hope I have clarified your query, do write back if any more queries, All the best.

Thank you for your answer. In view of my case, would you agree that it would be beneficial for me to continue on with the LMWH so long as there is not too much active bleeding? Looking at my tests, would you say that the benefit of being on LMWH outweighs the risk? My ob and rheumatologist do not seem to be on the same page as to whether I should continue it. The rheumatologist says I "must" continue, but the ob does not think my tests show an absolute indication to continue on with the heparin. Your thoughts would be much appreciated.

Hope you are doing well. Hope you had no further episodes of bleeding.

You said it right, better wait for few days. This will decide how significant the bleeding is. If you feel it is reducing, then keep having the injection, or stop it if bleeding is increasing. Have a scan one week after the date of the previous scan. Note the size of the hemorrhage.

In the meantime, I suggest you can have medication to prevent such bleeding like:

Consult your specialist doctor, discuss with him or her and start taking the medicines with their consent.

All these till 12 to 16 weeks. These have no side effects and bleeding will stop.So do continue Heparin.Hope I have clarified your query, do write back if any more queries. All the best.

Related Questions:
Is bleeding during pregnancy related to miscarriage?


.. anembryonic pregnancy, and at 8 weeks still, there is no embryo, no sac and have clots or bleeding. So it is more likely going to abort. There could be conservative, medical and surgical management. In conservative, you can wait for nature to take...   Read full

I am bleeding during pregnancy. Should I discontinue Heparin injection?


.. you doing? I know it is a tough situation for you to decide. Do not panic. Relax, you are doing fine. Let me answer you one by one. 40 mg dose of LMW Heparin once a day is a prophylactic dose. Twice a day is a therapeutic dose. So just by getting...   Read full

How to use Contractubex combining with SPF 30?


.. cepae, Heparin, Allantoin) is a topical medication of scars. Apply this gel to the scar in the morning and night after washing your face and you have to massage the gel over scar with clockwise and anticlockwise wise rotatory movements for 4 to 5 ...   Read full