iCliniq / Answers / Obstetrics and Gynaecology / Mifegest Kit / What is Mifegest used for?

Q. When can I expect bleeding to start after taking Mifegest kit? 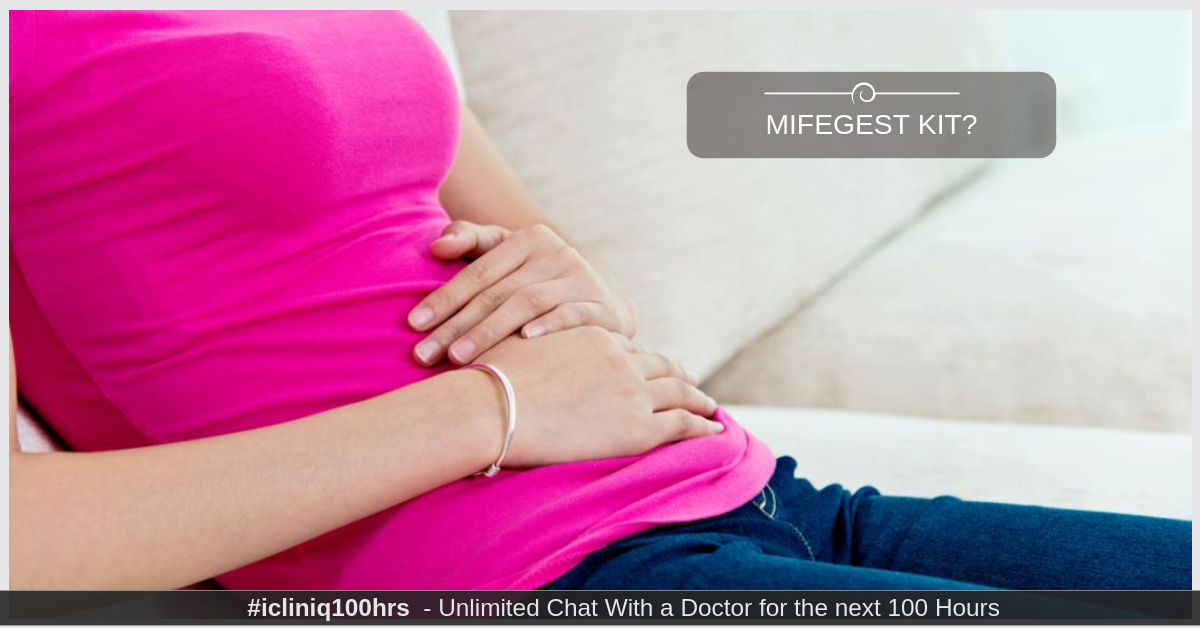 I took a pill of 200 mcg yesterday night and two pills of 200 mcg of Mifegest kit today morning and I am having lower back pain and abdominal cramps.

So, when will bleeding start? And is it risky that I cannot handle it by myself at home?

Welcome to icliniq.com. How are you doing?

The first pill dislodges the embryo from the uterine lining and you may have some vomiting tendency, but no bleeding. Then the second pills make the uterus to contract and open the cervical canal and the dislodged embryo falls out. The ideal way of taking the pill is to have the first pill and then have the second group of pills after 48 hours of the first pills. Thereby, you give enough time for the embryo to separate from the uterus. The bleeding usually starts within a day or two of the second pill.

It is the second pill, which is making the uterus to contract and the cervical canal to open, that is causing the cramps. You can have any of the painkillers like tablet Meftal spas or Cyclopam or Spasmo Proxyvon two to three times a day. Consult your specialist doctor, discuss with him or her and start taking the medicines with their consent.

The bleeding depends on the duration of pregnancy. If early, like less than six to seven weeks, the bleeding will be like periods. If later than that, it will have few clots and the bleeding will be more than normal but can be handled at home. You will need the doctor's help only if there is no bleeding or too much bleeding. Usually, it will resolve in two to three days.

Hope I have clarified your query, Do write back if you have any more queries. All the best.

Now, what should I do? Should I worry about the bleeding?

I suggest you take no tension at all. The bleeding will occur just like periods, maybe with a few clots. Just keep few painkillers I mentioned, handy. If the bleeding troubles you, then I suggest you have a tablet containing Tranexamic acid such as Trapic-MF or Tranostat-M or Pause-MF three to four times a day, as per the bleeding.

Keep these handy even before the bleeding starts. They will help you. Consult your specialist doctor, discuss with him or her and start taking the medicines with their consent. All the best.

|
Related Questions:
Is the abortion process complete or not?
After abortion, my wife is bleeding from anus. How to manage?
Is it fine to use Mifepristone for abortion after C-section?

What is the Mifegest kit used for?

Mifegest kit contains Mifepristone and Misoprostol, which are used to terminate a pregnancy during the early stages (10 weeks). It acts by blocking the effect of the hormone progesterone that is needed to maintain a pregnancy.

What are the side effects of the Mifegest kit?

Mifegest kit is used for medical abortion and should be used only under strict medical supervision. It can cause side effects like excessive vaginal bleeding, tiredness, nausea, vomiting, abdominal pain, diarrhea, dizziness, and headache.

How is the Mifegest kit used?

Mifegest kit should never be taken unless prescribed by your physician. It contains Mifepristone and Misoprostol, which are used for medical abortion. The kit includes four tablets, which have to be taken within 24 to 48 hours. For more information on the dosage, consult a doctor now.

How long does bleeding occur after taking the Mifegest kit?

Bleeding normally starts after 1 to 4 hours after taking the tablets, but can begin anywhere between 24 to 72 hours. Most women bleed for 9 to 14 days after medical abortion.

How does the Mifegest kit work?

The mechanism of action of the active ingredients present is:
- Mifepristone - It inhibits the action of progesterone.
- Misoprostol - It increases the secretion of protective mucus.

How long does it take for the Mifegest kit to work?

It can take anywhere between 24 and 48 hours for the pills to start working. You might start having bleeding as early as 2 to 4 hours or as late and 72 hours. But if you notice very light or no bleeding after 72 hours, then it means the abortion was not successful.

How long does the effect of the Mifegest kit last?

You might have bleeding or spotting for 9 to 14 days, but sometimes it may take 30 days. If you have severe bleeding with abdominal cramps even after a couple of weeks, then consult your doctor immediately.

How effective is the Mifegest kit?

Medical abortion kits are around 90 % effective if taken up to 63 days of gestation.

What if I miss a dosage of Mifigest tablets?

Will Mifepristone and Misoprostol be effective if taken after 49 days of pregnancy?

Query: Hello doctor, My fiancee is 59 days pregnant. So we consulted a doctor for an abortion and she prescribed Mifepristone and Misoprostol for the abortion. But the doctor had told this method should be used before 49 days. So if these tablets are taken on the 59th day, how much effective it would be?  Read Full »

I want to know if pills Mifepristone, Misoprostol are genuine and reliable and how to use it?

Query: HelIo, I want to know if my pills unwanted-kit from mankind (1 Mifepristone, 4 Misoprostol) genuine and reliable and how to use it?  Read Full »

What are the uses of Misoprostol?