Q. What can be the causes of pain below Adam's apple?

Answered by
Dr. Mehak Agarwal
and medically reviewed by iCliniq medical review team.
This is a premium question & answer published on Mar 07, 2018 and last reviewed on: Jul 19, 2019 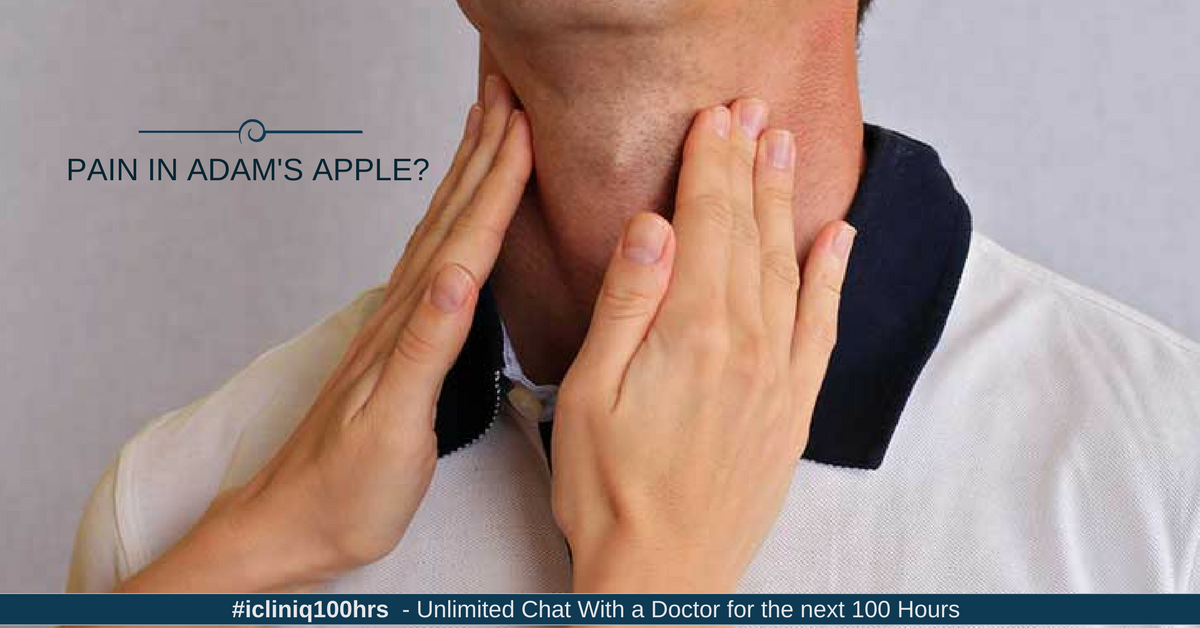 I am a 32 year old male with a history of some tonsil problem. About seven years ago, I had both a peritonsillar abscess and mononucleosis around the same time. After that, I began seeing an ENT for some fatigue and for lymph nodes on my neck that were both large and painless. After a few months, the fatigue went away. The ENT sent me twice for fine need aspiration biopsy of the lymph nodes, but it found nothing. He said that my symptoms are due to my body being exhausted from the infections. Years have passed, the lymph nodes never went down, but I am doing fine. Now all of a sudden, I have developed a sore throat. I do not have redness, inflammation or white spots, and it is further down from my Adam's apple and a little to the right. It feels a little tight or sore when I swallow sometimes, and it becomes more pronounced if I turn my head to certain angles and swallow. It really is not all that bad, but considering everything that I have been through in the neck and throat area, I get concerned quickly. I have had this discomfort for about five or six days. Now I know I have to see a doctor and I will. But given this information, how concerned would you be that I might have a tumor in my neck causing this feeling? I am growing very concerned about that. What else could it be? It definitely is not a normal sore throat.

Kindly send pictures of your throat to be surer of the diagnosis.

Revert with more information to an ENT otolaryngologist online --> https://www.icliniq.com/ask-a-doctor-online/ENT-Otolaryngologist

I have attached a picture of my throat. It is not very clear, but as I said there is no redness, inflammation, or white spots. I have had that before with tonsillitis and do not have it now. In fact, the discomfort I feel does not even seem to be in the back of my throat near my tonsils. It seems much deeper in my throat near Adam's apple. I am worried about throat cancer. I do not smoke, and I know throat cancer at my age is far fetched. But, I cannot understand what else would cause discomfort in that spot.  As a doctor, would you think I likely have a tumor or something less serious?

The picture you uploaded (attachment removed to protect patient identity), is quite normal.

Do revert back with the details.

If you still think the pain below your Adam's apple is thyroid-related or cancer, get a medical second opinion online.

Thank you for the reply. I saw an ENT today. He felt my throat, looked at my tonsils, and then gave me a laryngoscopy. He said that everything looked fine, there is just some mucus. Just to be safe he sent me for an ultrasound of the neck to see if anything odd pops up, but he said he fully expects everything to be fine. This is definitely reassuring to me and brings me some peace of mind. Do you think the laryngoscopy and the ultrasound (assuming it comes back fine), are enough to rule out anything cancerous in the throat area fully? What about the tonsils? If there were anything cancerous in the tonsils, would the laryngoscopy show that?

Do get back, if you have any doubts about the ultrasound report.

After the ENT visit today, I took a good look at my tonsils and noticed this little bump on the right tonsil pillar. It is about the size of half of a pea. But when I touch it, it feels firm. And there is nothing like it on the other side. Is this something I should be concerned about being malignant?

Related Questions:
What can cause chronic throat irritation?


From the details you have provided regarding your symptoms and the previous consultations, I can conclude with reasonable surety that you are suffering from a condition called reflux laryngitis ....   Read full

I am having loose motions and stomach cramps. Can you suggest a tablet?

I have sore throat, slight cough and post nasal drip. What can I take?


You should have tablet Azithromycin 500 mg once daily, along with some antacids like Pantoprazole 40 mg before breakfast once daily for five days ...   Read full