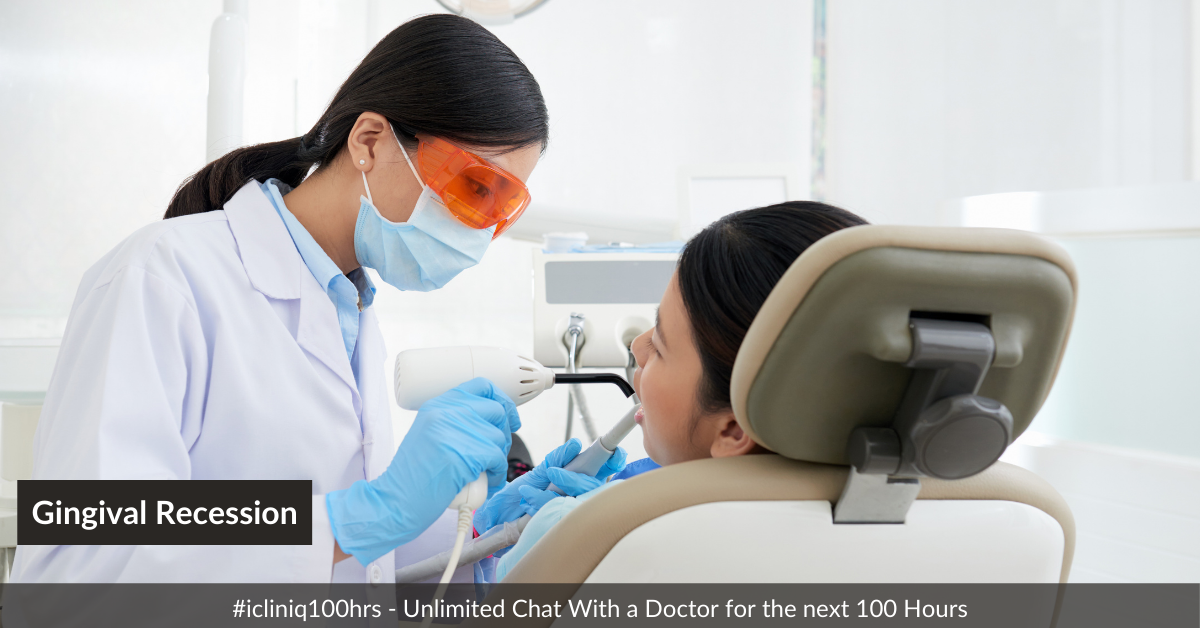 Esthetic dentistry remains the biggest challenge for dentists all over the world. They face the daunting task of treating gingival recession, also called receding gums, refers to root visibility partially or totally. Patients often report at a very later stage when the prognosis becomes poor. It is commonly seen that the gingival recession affects almost every individual. It is usually treated when it causes either dentinal hypersensitivity or root caries. Certain strategies have been proposed to treat gingival recession, which includes graft surgeries and, in addition, some adjunctive combinations to them. It could be the greatest boon if patients show greater concern for the treatment of gingival recession at an early stage to prevent the extraction of teeth.

What Is Gingival Recession?

Gingival recession is defined as exposure of the root surface by an apical migration in the position of the gingiva. It means it goes down, and the root, which is otherwise covered with gingiva, is totally or partially visible. It has four classes (Miller PD -1985), and among them, Class I and Class II have 100 percent complete coverage and excellent prognosis, while class III and IV have partial coverage and poor prognosis. Hence, the best time to have treatment of this biggest hurdle of esthetic dentistry is class I and Class II gingival recession. At this time, very little sensitivity is there, and even there are very few chances of root caries.

It is a good fortune that esthetic surgery has developed a lot of plastic surgery procedures to treat gingival recession. They are broadly classified as either rotational flaps or autogenous grafts. Autogenous grafts involve taking a graft from the donor site and placing it into the recipient site, with both sites located at different positions. At the same time, rotational flaps involve placing the graft coronal or lateral to the donor site. Here the recipient site is either coronal or lateral to the original site. Nowadays, certain adjuncts are used to increase the successful outcome, which includes platelet concentrates and membranes like Chorioallantoic Membrane (CAM).

Related Topics
Dermal Fillers - a Revolutionized Treatment for Aging Face
My gum graft surgery stitches have become loose. What to do?
What is the effective treatment for receding gums?

Among autogenous grafts, the first and most ancient graft is the free gingival graft. It is a graft taken from the palate (best site) and transplanted into the recipient site (where there is a gingival recession). It has the best advantage of increasing the width of keratinized tissue, which, in turn, prevents the further progression of recession. However, it has two main disadvantages, namely the creation of painful post-operative wounds at the palate and poor matching of esthetics. In other words, the recipient site does not show good blending with adjacent tissues. Blood supply is sometimes compromised with this graft. So, in order to compensate for the disadvantages of a free gingival graft, subepithelial connective tissue graft (SCTG) came into force. It is considered as a gold standard for treating gingival recession because it offers many advantages like good blending, less painful post-operative wound, and increased keratinized tissue. But, there is only one disadvantage that it requires the palate to be almost 3 to 4 mm thick otherwise procedure cannot be done. Also, being a technique sensitive procedure, it is difficult to perform as compared to free gingival graft (FGG).

In order to compensate for the disadvantages associated with autogenous grafts, rotational flaps came into existence. These flaps can be moved laterally (side direction) or in coronal (upward direction). Coronally advanced flap (CAF) refers to the coronal movement of the flap, while lateral pedicle flap refers to the lateral movement of the flap. Lateral pedicle flap (LP) is indicated in anterior teeth where a large donor tissue (from the adjacent tooth) can be moved out to the recipient site. It also prevents further development of a recession by increasing the keratinized tissue and provides good esthetics. There are two more variants called transposition flap and double papilla flap. But they have some disadvantages. Hence, the coronally advanced flap is better than these flaps. It provides good color blending and eliminates the need for both donor and recipient tissue. It is used both in single and multiple recessions and in combination with free gingival graft and subepithelial connective tissue graft (bilaminar technique). The only disadvantage associated with it is vestibular shallowing in lower teeth.

Another variant is the semilunar coronally advanced flap, which does not use any sutures also. It is the most atraumatic technique among all graft surgeries. The only limitation with this technique is at least 3 mm of keratinized gingiva is present at the tissue.

Many adjuncts are used in combination with these grafts. Such as:

Emdogain - a derivative containing an enamel matrix. It is used as an adjunct to coronally advanced flap in treating moderate recession. However, cost remains the crucial factor for its less widespread use.

Guided Tissue Regeneration (GTR) - is the oldest adjunct among all options. It is used as a membrane beneath the coronally advanced flap. The membrane could be resorbable (Vicryl) or non-resorbable (poly-tetra fluoro ethane). It is specially indicated with deep recessions of 4 to 5 mm. However, the major problem with the procedure is a poor adaptation to the root convexity.

Adaptation to the root remains a challenge for clinicians. It is really appreciating to note many membrane boxes have been devised to adapt the membrane to the root surface.

Nowadays, the combination of a coronally advanced flap with PRF is extensively used.

Many other membranes are available like Alloderm, Mucograft, Oxycell, Chitosan, and collagen membranes. Alloderm is sometimes considered as a good replacement to SCTG because of good coverage. However, the thickness of keratinized tissue remains a limiting factor for Alloderm and other above-mentioned adjuncts.

Recession treatment remains a stone in the success of esthetic surgery. Its eradication lies not only in the hands of clinicians but also in patient’s cooperation. Early diagnosis remains the key to success. A variety of procedures are available, but the best approach is the least trauma, maximum root coverage, and further prevention. I personally recommended clinicians to use a coronally advanced flap with either an adjunct (preferably PRF) or graft (SCTG) to treat recession and provide good results.

How to Treat Gingival Recession?

Gingival recession can be treated by a procedure called root planing and scaling. In this procedure, the dentist will remove the calculus (tartar) and plaque from the crown surface and the root surface. Sometimes, it requires gum tissue grafting to restore the lost gum tissue in severe gingival recession.

What Are the Causes of Gingival Recession?

What Do You Mean By Gingival Recession, and When Does It Occur?

Gingival recession is also called receding gums. It is the exposure of the root surface or the withdrawal of the gingival margin from the crown surface of the teeth. It is a common problem in adults above the age of 40 years. But it can also be noticed in teenagers and children around the age of 10 years.

How Can You Stop Receding Gums From Getting Worse?

To stop the gingival recession, you first have to understand the exact cause for it. You can then prevent it from getting worse by following these instructions:
- Avoid smoking cigarettes.
- Limit alcohol use.
- Control systemic conditions like diabetes.
- Brush and floss consistently
- Maintain a well-balanced diet.
- Stay hydrated.
- Use mouthwashes such as Chlorhexidine after consulting a dentist.
- Go for routine dental check-ups at least every six months.

Gingival recession needs surgical intervention when a patient raises concerns about esthetics or tooth hypersensitivity, when there is an active gingival recession, or when orthodontic or restorative treatment will be implemented on a tooth with predisposing factors. The benefits of these treatment approaches are not well supported in current literature relative to alternative methods with control of the possible etiologic factors.

Can Receding Gums Be Reversed?

Reversing your receding gum depends on its stage. If it is diagnosed at an earlier stage, it can be easily treated. We cannot change it to normal as before, but we can stop it from getting worse, following correct brushing techniques and good habits in life. Early treatment with scaling and root planing can help reverse receding gums.

How to Fix Receding Gums Naturally?

Massaging your gums can promote blood circulation all over the gum, and the availability of nutrients to the gum tissues is an effective treatment for receding gums. Special gum massaging devices are available called gum stimulators or gum massagers.

Should I Be Concerned About Gingival Recession?

You should be concerned about gingival recession because the teeth' roots become exposed, leaving the teeth at risk of infection, decay, and loss. The first sign of a gingival recession is usually tooth sensitivity, the teeth looking longer than usual, and a notch can be felt at the gum line. So if your gums are receding, do not ignore it and consult your dentist.

The vitamins which help to treat receding gums are:
- Vitamin D helps to prevent the risk and severity of periodontal diseases and controls inflammation.
- Vitamin C protects the gums from the harmful effects of free radicals. And it helps in the formation of connective tissue (collagen), which fixes the gums in its place.
- Vitamin B helps in the production of new gum tissues.

How to Know if Your Gum Graft Has Healed?

Can My Teeth Fall Out Due to Receding Gums?

In advanced gingival recession cases, it can cause your teeth to fall out due to loss of gum tissue attachment to the root surface.

Vitamin C helps treat receding gums in two ways. First, it protects the gums from the harmful effects of free radicals, which destroy the healthy tissues, and in the formation of connective tissue, the collagen that helps to hold the gum tissue in its place.

How to Measure Gingival Recession?

Clinically, gingival recession is measured as the distance from the cementoenamel junction (the point where the cementum meets the enamel) to the depth of the free gingival margin using the millimeter markings on the periodontal probe, and it shows the exposure of the root cementum.

Two of my teeth remain wobbly after having receding gums. What to do?

Query: Hi doctor,I have receding gums, and they are sore as well. Two of the teeth are wobbly, and I am terrified they are going to fall out. I am only 19 years old. I brush and floss my teeth twice a day. I used to smoke. Since I have noticed my teeth issue, I quit smoking. Please help me. I am desperat...  Read Full »

Esthetic Dentistry - for You to Smile with Confidence

Article Overview: Facial Esthetics is gaining more and more popularity as we get increasingly concerned about our beauty. Our teeth play a major role in beautifying our smile and overall aesthetics. A smile is the best make up anyone can wear. This article will brief you about the various treatment options a dentist can offer you to adorn your smile. Read Article

Facial esthetics is gaining more and more popularity as we get increasingly concerned about our beauty. Our teeth play a major role in beautifying our smile and overall aesthetics. A smile is the best make up anyone can wear. This article will brief you about the various treatment options a dentist ...  Read Article

Why Is It Necessary to Add Images for Online Medical Queries?

Do you have a question on Receding Gums or Gingival Graft?