Feeling depressed over a particular situation is acceptable and is an ordinary happening in everyone's life. But, if present for a prolonged period, it requires attention. Scroll down this article to get to know a lot about depression. 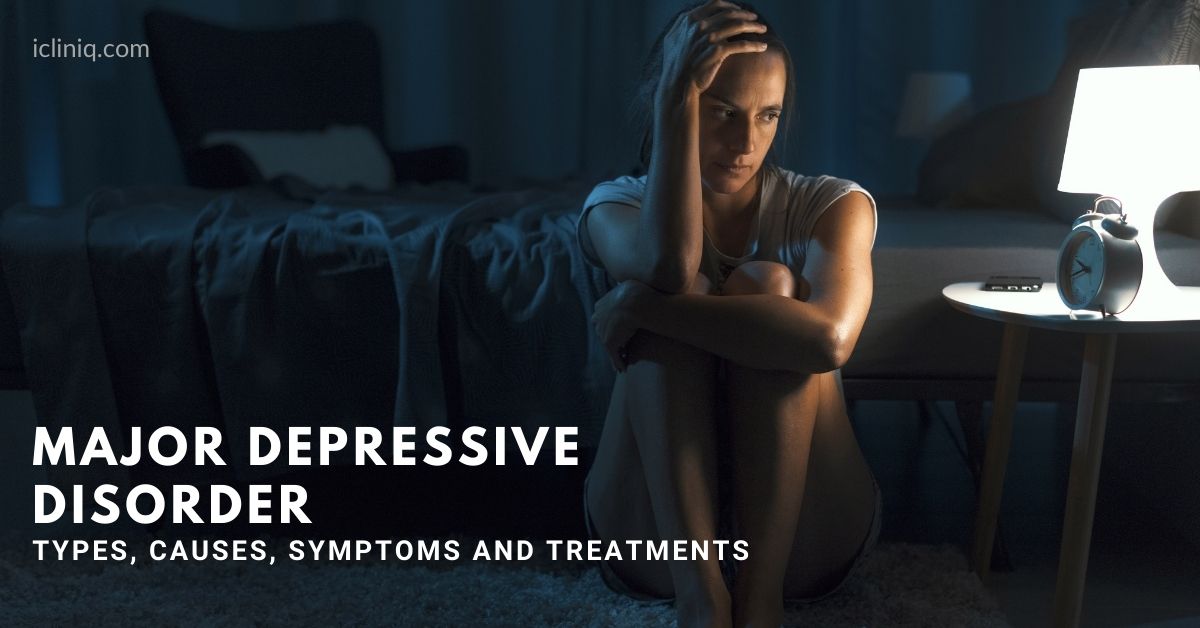 What Is a Major Depressive Disorder?

Major depressive disorder is a condition that is characterized by long-lived periods of persistent and intense grief. It is also known as clinical depression and has a severe impact on an individual's mood, behaviors, and physical functions like appetite and sleep. It has been reported to be one of the most prevalent health conditions in the United States.

What Is the Cause of Major Depressive Disorder?

Although not clearly known, several factors may contribute to major depressive disorder, which includes the following:

Though not apparent, physical changes in the brain are known to have an effect on depression.

The risk of developing major depressive disorder runs in families. People whose blood relatives have this condition are more likely to get this disease. However, the gene responsible for causing depression is under research.

What Are the Types of Major Depressive Disorder?

Symptoms of depression are not the same for all persons and vary from one individual to another. Type of depression is determined with the help of the following specifiers:

How Is Major Depressive Disorder Manifested?

Many people are not aware of why they feel depressed. Depression occurs in multiple episodes throughout one's life and can be present throughout the day and almost every day. Also, it can be evident from the day-to-day activities in the household, school, or workplace.

Following are the symptoms of major depressive disorder:

How Is Major Depressive Disorder Manifested in Children and Young Adults?

In addition to the above signs and symptoms, children and teens exhibit a few other symptoms like:

How Is Major Depressive Disorder Manifested in Older Adults?

Depression should not be considered a normal phenomenon of aging. Instead, medical help should be sought. Although many older adults are reluctant to speak about this, we must look for the following signs in them:

What Increases the Risk of Developing Depression?

Depression can occur in any stage but is probably thought to start in the teens, 20s, or 30s. The below factors increases the risk of developing or triggering an existing depression:

How Is a Major Depressive Disorder Diagnosed?

In order to determine if depression is associated with an underlying medical condition, a complete medical history and physical examination are made by the physician.

Blood tests like complete blood count and thyroid function tests are done to determine abnormalities in blood cell count and proper functioning of the thyroid, respectively.

Symptoms, behavior patterns, feelings, and thoughts are analyzed by the mental health professional. In some cases, the patient might be asked to fill a questionnaire.

The American Psychiatric Association has listed criteria in the Diagnostic and Statistical Manual of Mental Disorders (DSM-5), using which the mental health professional diagnoses and categorizes depression.

What Disorders Result in Depression?

How Is a Major Depressive Disorder Treated?

A major depressive disorder primarily improves with psychotherapy and medications. In some cases, treatment might require a stay in the hospital followed by outpatient treatment.

It is a treatment procedure that involves talking about the mental health condition and other related issues with a therapist. It is also known as psychological therapy or talk therapy. Different types of psychotherapy can effectively treat depression, including cognitive-behavioral therapy, interpersonal therapy, or group therapy.

Psychotherapy can help you in the following ways:

Additional Forms of Psychotherapy- in addition to face-to-face interaction, psychotherapy can also be carried out in the form of online sessions, computer programs, workbooks, or videos. These can be guided fully or partially by a therapist or can sometimes be totally independent.

In severe cases where there is an increased risk of harming oneself or others, psychiatric treatment is done in the hospital. Stay in the hospital is recommended until the condition improves. In case of partial hospitalization or day treatment programs, counseling and outpatient support help people by bringing the symptoms under control.

Electroconvulsive therapy and transcranial magnetic stimulation are the therapies that help in treating depression by causing brain stimulation. These are used when antidepressants medications and psychotherapy are not effective.

What Are the Complications of Major Depressive Disorder?

Depression affects not only the individual but also the family as a whole. If left untreated, it can cause severe emotional, physical, and behavioral adverse effects involving all spheres of life.

The following are the complications of depression:

Do not feel hopeless about having depression because it is undoubtedly a treatable entity with adequate treatment measures. Follow the treatment protocol suggested by your mental health professional strictly, as this helps in overcoming depression. Do not skip follow-up appointments or stop your medicines without the advice of the doctor. Enjoy a stress-free life!

What Are Five Possible Symptoms of Major Depressive Disorder?

Major depressive disorder is considered a severe mental health disorder because it can drastically affect a person's life and is also known by the terms clinical depression or depression. It is deemed severe because it can affect a person's sleep, concentration, decision-making ability, and thinking and causes unexplained pain in the back and head. Also, it can result in suicidal intentions.

Is Major Depressive Disorder a Disability?

Major depressive disorder (MDD) is a leading cause of disability, and according to the ADA (Americans with Disabilities Act), depression is considered a psychiatric disability. It interferes with daily activities, and when it becomes severe, it no longer allows you to work.

Major depressive disorder is a severe illness that is not curable but treatable. The treatment depends on the severity, and it ranges from antidepressant medications to psychotherapy, talk therapy, dietary changes, good sleep, rest, and lifestyle changes.

Major depressive disorder is a mental illness and is considered a severe mental health disorder because it can drastically affect an individual's daily life. This serious mental illness is also known as depression or clinical depression.

Is Major Depressive Disorder the Same as Bipolar?

Major depressive disorder (MDD) is a lifelong or long-term illness for many patients, so maintenance therapy is needed to prevent the recurrence of depression in patients with recurrent depression.

How Does Major Depressive Disorder Affect the Brain?

Major depressive disorder causes the complex brain structure present deep inside the temporal lobe to raise the cortisol levels, making it challenging to develop neurons in the brain. It results in the shrinkage of brain circuits, reducing the function of the affected part in the brain.

The major depressive disorder could also have genetic factors, but it does not always have a clear inheritance pattern in families. It is said that people with first-degree relatives like parents or siblings are three times at greater risk of developing this condition than the general public.

Which Form of Therapy Is Most Effective for Major Depression?

For major depressions, cognitive behavior therapy and interpersonal therapy are effective compared to other usual care. It is an evidence-based psychotherapy that is good for adults with major depressive disorder and generalized anxiety disorder.

Can depression and anger issue get worse with Fetzima?

Query: Hello doctor, I was just wondering about a medication. Can depression and anger issue get worse with Fetzima if only taken for a day?  Read Full »

Why do I get so intimidated by others?

Query: Hi doctor, I am a 38-year-old male. I am married and I have a child. I have difficulty in sleeping at night. But I always feel sleepy. I forget things easily. I have low concentration and I am lethargic. I have confusion to take a decision. I have low self-esteem with low confidence. I feel like ...  Read Full »

How to taper the dosage of Venlafaxine and Mirtazapine?

Query: Hi doctor, I am taking the following antidepressants for 14 years with doses as below. Tablet Lametec 25 mg in morning 50 mg in the night, tablet Ventab 25 mg in the morning and 50 mg at night, and tablet Mirtazapine 15 mg at night. I am gaining weight due to Mirtazapine and erection issues due to...  Read Full »

Do you have a question on Major Depressive Disorder or ?