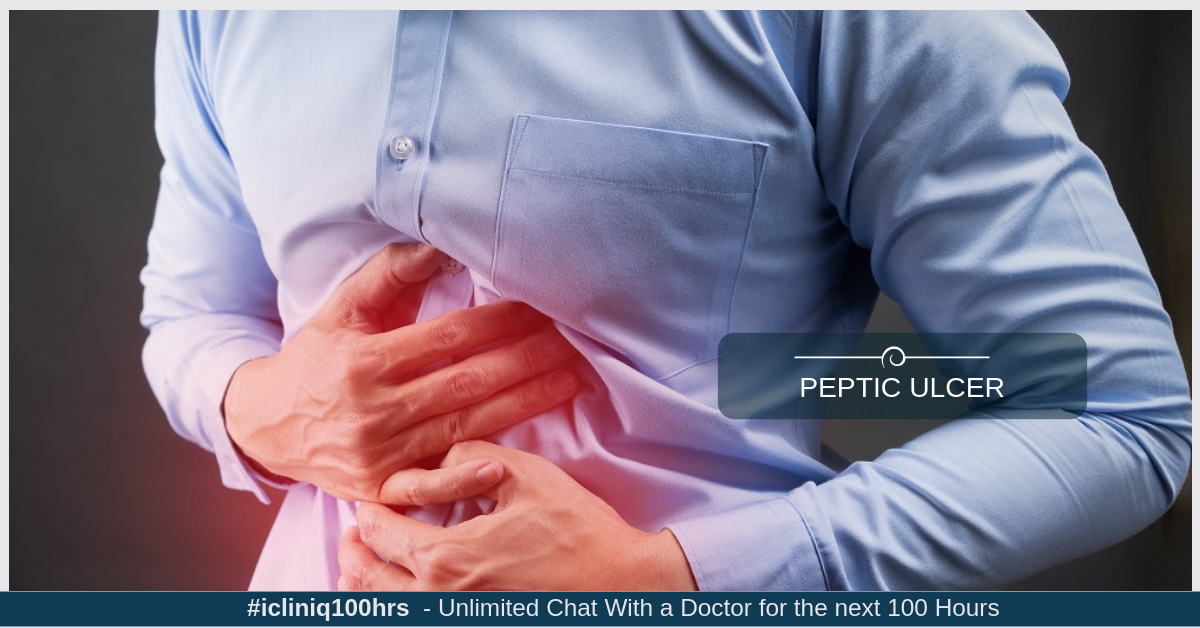 Ulceration in the inner lining of the stomach or upper part of the small intestine is called peptic ulcer. The sore is a result of inflammation caused by the bacteria H.pylori or due to erosion from acids present in the stomach. Stomach pain is the most common symptom experienced by people suffering from peptic ulcer amongst others like bleeding, bloating, and rarely perforation. 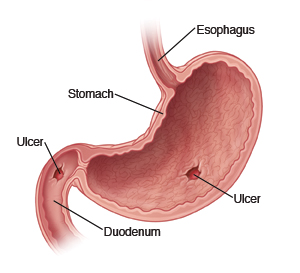 Related Topics
Taking Pantoprazole for GERD. Is any drug interactions between Pantoprazole and Voltaren?
I am having heartburn for past four months. What can be done?
H. Pylori Infection - Diagnosis and Prevention

The common causes are as follows:

Burning type of abdominal pain is the most common symptom of peptic ulcers. This pain radiates from the navel to the chest and varies from being mild to severe. Small ulcers do not produce any pain in the initial stages. The symptoms include:

People with the following adverse habits are at risk of developing peptic ulcers.

If you are experiencing any of the above symptoms, it is best that you consult a doctor. Your doctor will ask you about the symptoms and history, and if he or she suspects a peptic ulcer, you would have to undergo the following tests:

Here, the doctor inserts a long tube with a camera attached on one side (endoscope) through your mouth and throat, into the stomach. This will help the doctor to see the stomach and small intestine lining, and to visualize the ulcer. They can also collect tissue samples for testing.

The treatment depends on the cause. The following treatments are used:

It is essential to detect and treat ulcers as soon as possible because untreated ulcers can cause serious health complications like:

All the above conditions are serious, so seek medical attention if you experience any of the following symptoms:

A few alterations in your lifestyle and habits can reduce the risk of you developing peptic ulcers. The lifestyle changes and habits include:

Most peptic ulcers heal with proper care, but some ulcers, called refractory ulcers, do not heal with treatment. In such cases, your doctor will run additional tests to rule out stomach cancer and other gastrointestinal diseases. You can recover faster if you follow home remedies and preventive measures along with the prescribed medicines. A lot of medicines used in the treatment of other illnesses can increase the symptoms caused by a peptic ulcer, so always inform your treating doctor about the ulcer.

How Do I Know If I Have a Peptic Ulcer?

The usual peptic ulcer sign or symptom is burning stomach pain. Here, the stomach acid makes the pain worse, as much as having an empty stomach. This pain can often be eliminated by consuming certain foods that buffer stomach acid or taking an acid-reducing medication. But, in the later period, this may come back.

What Is the Most Common Treatment for Peptic Ulcer?

How Painful Is a Peptic Ulcer?

The usual peptic ulcer sign or symptom is burning stomach pain. Here, the stomach acid makes the pain worse, as much as having an empty stomach. In rare scenarios, these ulcers may lead to severe symptoms by causing vomiting or vomiting blood, which may appear black or red.

What Should I Not Eat With Stomach Ulcers?

Foods that must be limited or avoided during peptic ulcer are:
- Chocolate.
- Coffee.
- Alcohol.
- Spicy food.
- Caffeine.
- Acidic foods, such as tomatoes and citrus.

How Are Peptic Ulcers Treated?

Treatment for peptic ulcers purely depends on the cause. Usually, the treatment involves killing the H. pylori bacterium, if present, reducing or eliminating the use of NSAIDs, and helping the ulcer heal with medication. However, the patients must consult with their doctor or healthcare advisor for proper treatment.

Is Garlic Good for a Peptic Ulcer?

Having two cloves of raw garlic per day for three consecutive days will help to decrease bacterial action in the stomach lining of patients who are suffering from H. pylori infection. Garlic has antibacterial and antimicrobial properties that will help prevent ulcers and heal them quickly.

What Are Ulcer Healing Drugs?

Below are certain medications that are used to heal ulcers; they are:
- Proton pump inhibitors (PPIs).
- Antibiotics.
- Histamine-2 receptor antagonists.
- Cytoprotective agents.

How Does Peptic Ulcer Affect the Digestive System?

Ulcers sometimes cause swelling and scarring of the tissues in the small intestine. It can also cause edema. It may prevent food from easily passing out of the stomach. This blockage may cause nausea, bloating, or vomiting after eating.

Stomach ulcers might be easily cured with adequate treatment, but they are capable of becoming severe without proper treatment. Uncomplicated gastric ulcers can take a period of two to three months to heal. Duodenal ulcers usually take a period of about six weeks to heal. However, an ulcer is capable of temporarily healing without the use of any antibiotics.

Who Is Most Likely to Get Peptic Ulcers?

How Long Do Peptic Ulcers Take to Heal?

Uncomplicated gastric ulcers usually take a period of two or three months to heal adequately. Duodenal ulcers will take a period of six weeks to heal. An ulcer is also capable of temporarily healing without antibiotics. However, it is common for any ulcer to recur again, or also another ulcer can form nearby to the previous ulcer if the bacteria are not eradicated.

What Is the Difference Between a Gastric Ulcer and a Peptic Ulcer?

Is Ginger Good for Peptic Ulcers?

A study has proven that ginger can help in treating gastric ulcers, which are caused by Helicobacter pylori bacteria. Intake of ginger is also capable of preventing ulcers caused by NSAIDs. Along with ginger intake of raw garlic can also help in reducing the bacteria at the stomach and duodenum.

How to Treat a Peptic Ulcer at Home?

Peptic ulcers can be treated and prevented at home by choosing a healthy diet, Consuming foods that contain probiotics. Avoid the intake of milk. During severe flare-ups of the ulcer, do switch pain relievers apart from the NSAIDs group of drugs. Control and mindfully manage stress. Do not smoke also limit or completely avoid alcohol consumption. Always get an adequate amount of sleep.

The following are the medications prescribed for peptic ulcer disease that are known to cause hallucinations
1. Nizatidine.
2. Sucralfate.
3. Omeprazole.
4. Metoclopramide.

What Is the Management of Peptic Ulcer?

Treatment for peptic ulcer disease solely depends on the cause of the disease. Normally treatment will focus on eradicating the H. pylori bacterium. If it is the cause present, the next best step in management is by eliminating or reducing the use of NSAIDs. Both these steps in management help the ulcer to heal with appropriate medication.

How Long Does It Take for a Stomach Ulcer to Go Away?

Non-complicated gastric ulcers can take up to two to three months to heal. Duodenal ulcers, however, take a shorter period of about six weeks to heal. An ulcer is able to temporarily suppress even without antibiotics. However, it is usual for an ulcer to occur again at a site near to the old ulcer, especially if the bacteria are not killed.

What Is the Fastest Way to Cure a Peptic Ulcer?

The fastest way to cure a peptic ulcer is by following measures in addition to proper medical treatment
- Choosing a healthy diet profile.
- Intake of foods that contain probiotics.
- Eliminating the intake of milk.
- Switching pain relievers and eliminating the intake of NSAIDs.
- Control stressful conditions.
- Quit smoking.
- Limiting or avoiding alcohol intake.
- Get enough quality of sleep.

What Is the Most Common Type of Peptic Ulcer?

What Are the Complications of Peptic Ulcer?

Complications of peptic ulcers may include the following.
- Profuse bleeding.
- Perforation of the mucosal layer.
- Penetration that needs surgical correction.
- Obstruction of the gastric or duodenal lumen.

What Is the Prognosis of Peptic Ulcer?

When the underlying cause of peptic ulcer disease is treated properly with medicines, the prognosis of the disease is usually excellent. Most of the patients are treated completely with the eradication of the Helicobacter pylori infection, elimination of nonsteroidal anti-inflammatory agents like Aspirin and Naproxen that are used to treat any other conditions must be done if possible, and the appropriate use of antisecretory therapy increases the prognosis of peptic ulcer disease.

What Drink Is Good for Ulcers?

Any form of cranberry juice or raw fruit is known to fight the Helicobacter pylori infection. It is always good to avoid alcohol, tea, and caffeine-containing beverages.

What could be wrong if an H. Pylori infection does not improve with medication?

Query: Hi doctor, I was diagnosed to have the H.pylori infection a year ago. I have taken several doses of antibiotics, but the symptoms did not get better. What could be the problem?  Read Full »

How to Treat Heartburn?

Article Overview: The burning sensation in the chest due to acid regurgitating into the esophagus is called heartburn. Learn the causes, treatment, and prevention of heartburn. Read Article

Usually at night, we may feel a sour liquid in our throat coming from beneath or burning sensation in our upper tummy. The pain goes up through our chest to the throat. Sometimes we fear it as a heart attack. This is called heartburn or gastroesophageal reflux disease (GERD) in medical terms. How Do...  Read Article

I have GERD. Can you suggest any treament?

Query: Hello Doctor, I have been suffering from stomach ulcer for the past 2 years. Till now the ulcer was not severe, but since few days I have been having stomach pain everytime after having food. Doctor diagnosed that, I have GERD. But even then I faced GERD problems rarely. But for the past 3 weeks ...  Read Full »

Do you have a question on Gerd or Heartburn?