Gastroenteritis is a common condition encountered by almost everyone. However, despite it being common, there is a widespread lack of awareness regarding its common causes, especially its treatment. This article is aimed at giving the general public a better understanding of this condition and its treatment. 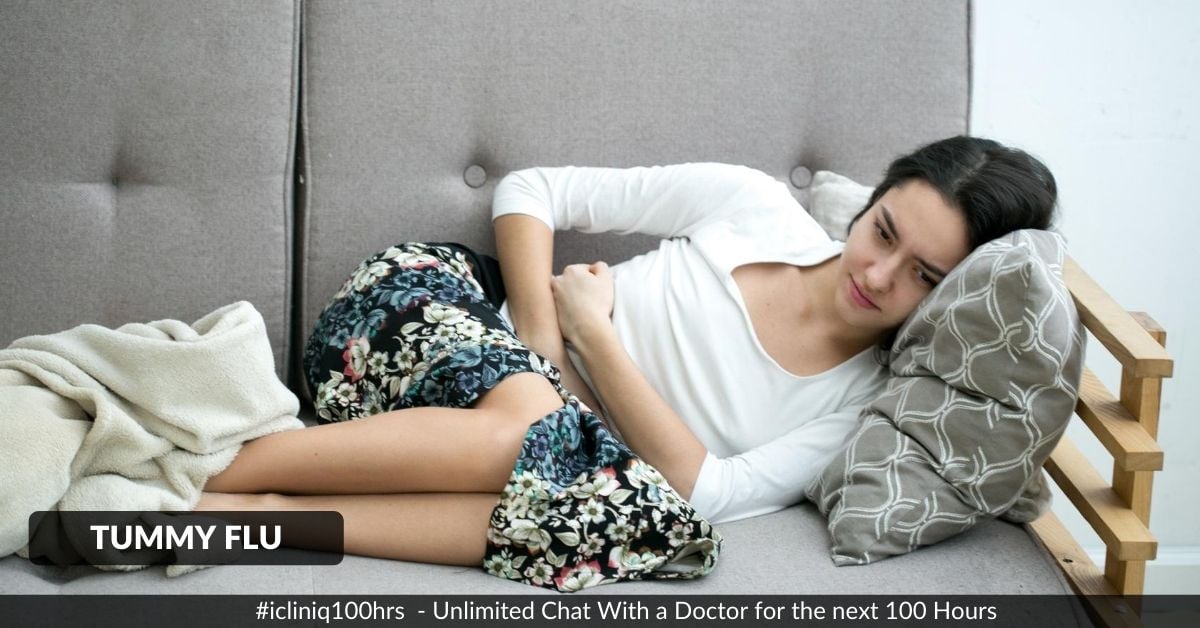 Gastroenteritis, commonly called the tummy flu or upset stomach, is the inflammation of the gut. Viruses usually cause it, but they can also be caused by bacteria and rarely by parasites, antibiotics, and other medications.

What Are the Organisms That Cause Gastroenteritis?

Common viruses that cause gastroenteritis are rotavirus and norovirus. The most common bacteria that cause this disease are E.coli, Staphylococcus, Salmonella, Bacillus, and Enterococci.

What Are the Types of Gastroenteritis?

What Are the Symptoms of Gastroenteritis?

Despite the cause, the symptoms are the same.

The common symptom of gastroenteritis is diarrhea with vomiting. The vomiting usually starts before diarrhea and subsides after one or two days. Diarrhea lasts longer, usually between 2 and 10 days. Diarrhea that lasts longer than 3 weeks is called chronic diarrhea. In immune deficiency patients, the impaired body defenses can considerably lengthen the duration of gastroenteritis. Diarrhea can even last for even weeks or months when caused by parasites like amoeba and lamblia.

How long the symptoms ultimately persist depends on the incubation period on the respective pathogen. If salmonella is the cause, the duration of the gastrointestinal infection is usually only a few days. Typical viral gastroenteritis is also often severe but lasts only for a relatively short time. Three days after the beginning of a norovirus or rotavirus infection, digestion usually returns to normal. The gastrointestinal flu caused by Campylobacter usually lasts a little longer, and the symptoms typically last 4 to 5 days, but occasionally up to 2 weeks.

How Does Gastroenteritis Spread?

Viral gastroenteritis will spread from person to person through contact with an infected person’s stool or vomit.

If a person has viral gastroenteritis, the viruses will be present in their stools and vomit. They may spread the virus from their stool or vomit, mainly if they do not wash their hands appropriately after using the washroom or if they:

Infected people who are asymptomatic can also spread viruses. For example, norovirus may be present in your stool before you have signs and up to two weeks after recovery. Therefore, very contagious norovirus can spread quickly from person to person. It can live for months on surfaces like countertops and changing tables. Especially when an infected person vomits, the virus can become airborne and settle on surfaces or another person.

What Are the Signs of Dehydration?

The most dangerous consequence of gastroenteritis is dehydration caused by a large amount of fluid loss during diarrhea and vomiting. This can be life-threatening and even fatal in young children. Gastroenteritis is one of the most common causes of death among children below 5 years of age in developing countries due to severe dehydration and failure of timely rehydration therapy. Look out for signs of dehydration which include extreme thirst, loss of skin turgor, dry mouth, lips, eyes, lethargy, dizziness, and decreased urine.

How Long Does Gastroenteritis Last?

How Is Gastroenteritis Treated?

Treatment of gastroenteritis mainly aims at the prevention of dehydration. However, when it is due to viral infection, antibiotics will not work in such cases.

Viral infections will mostly resolve on their own within 3-5 days. However, the illness that lasts longer and is associated with high-grade fever, severe dehydration, and blood in stools must be sorted out with immediate medical attention. Bacterial or parasitic infections may require antibiotic or antihelminthic therapy. Severe dehydration may require admission and intravenous fluid replacement.

Gastroenteritis can be prevented by taking the following measures:

What Are the Possible Complications of Gastroenteritis?

How Long Can the Stomach Flu Persist?

Stomach flu does not persist for a long time in children or adults. It usually clears up within 2 to 8 days, depending upon the virus that causes it. Usually, it lasts for about 1 to 2 days, but symptoms may linger up to ten days.

How To Get Rid Of a Tummy Bug?

To get rid of tummy flu you can:
- Drink plenty of fluids, oral rehydration solutions, and juices.
- Eat soft and bland foods like rice and bananas.
- Consume fruits, vegetables, and whole grains can if you can tolerate them.
- Avoid foods with lots of fat and sugar, which can aggravate the symptoms.
Over-the-counter (OTC) medications like Loperamide can be given to adults under 65 if they do not have a fever and no blood in stools to stop diarrhea, and it should not be given in adults over age 65 or patients with a fever or blood in the stool without the doctor's opinion. Children should not be given any medicines to stop diarrhea. Patients who have severe dehydration might require intravenous (IV) fluids.

Why Do Stomach Bugs Symptoms Are More At Night?

Stomach bug symptoms are more at night due to their circadian rhythm (inherent cycle of about 24 hours, helps to control various biological processes). An increase in the immune system activity at night releases infection-fighting chemicals. These chemicals can cause inflammation that make you feel more acute as you battle your flu.

What Exactly Will the Tamiflu Do?

Tamiflu will reduce symptoms like fever, stuffy nose, sore throat, and tiredness, which many over-the-counter medications do to the body. However, the most efficiency is received if the treatment is started within 48 hours after the appearance of the symptoms.

Which Juice Is Good For Treating Stomach Flu?

Coconut water is a low-sugar option that is good for drinking if you have the stomach flu. Also, drinking plenty of water and juices like apple juice, ginger juice with cinnamon and honey, etc., is suitable for treating stomach flu.

How Long Can You Remain Contagious With the Stomach Flu?

Viral stomach flu can quickly spread from person to person by contacting tiny, invisible particles from a sick person's stool or vomit. When infected, you can remain contagious for up to two weeks after you have recovered.

How To Avoid Getting Stomach Flu From The Family Members?

To avoid getting stomach flu from the infected family members, wash your hands properly with soap and water for at least 20 seconds, soon after using the bathroom, or changing diapers, and before eating or handling food.
- Clean the contaminated surfaces which may contain the flu virus.
- Remove any contaminated trash immediately.
- Use separate personal items to prevent the spread of the flu.

How To Quickly Get Rid Of A Stomach Bug?

To get rid of stomach bug quickly:
- Drink plenty of fluids.
- Get lots of rest.
- Try eating the foods recommended by the doctor.
- Soothe your stomach with some ginger.
- Try some anti-diarrheal medications.
- Take Tylenol for stomach cramps.

What Can Tamiflu Do To Your Body?

Tamiflu (Oseltamivir Phosphate) is an antiviral drug that reduces the flu symptoms by attacking the flu virus and stops it from multiplying in your body. Tamiflu can sometimes prevent you from getting the flu if you take it before you are sick.

What To Give For a Toddler for a Stomach Virus?

To treat the stomach virus in toddlers, you can give plenty of fluids, such as water, broth, or Pedialyte, to avoid dehydration. You can also give:
- Electrolytes.
- Caraway tea.
- Apple.
- Lemon.
- Peaches.
- Mint.
- Rice water.
- Yogurt.

How Long Does It Take To Become Gastroenteritis?

What Food Should You Avoid if You Have Gastroenteritis?

If you have gastroenteritis, you should avoid eating:
- Fried foods.
- Spicy foods.
- Sugary foods and drinks.
- Dairy products.
- Caffeine.

Can Gastroenteritis Go Away on Its Own?

Bacterial gastroenteritis will often go away on its own without any treatment. However, if there is vomiting and diarrhea, it can cause dehydration, so it is essential to stay hydrated.

What Can Gastroenteritis Do To Your Body?

Gastroenteritis is an illness that gets triggered by the infection and inflammation of the digestive system. It can cause abdominal cramps, vomiting, and diarrhea. However, in many cases, it will heal by itself within a few days.

How To Differentiate Between Food Poisoning and a Stomach Virus?

Why do I have severe stomach pain after eating fatty foods?

Query: Hello doctor, I am a 24 year old female. What could be the cause of a severe stomach pain that happens after eating nuts, seeds, and things with oil in them? By oil, I mean even olive oil and not just greasy foods. This reaction has been happening for a year or so, and I have avoided these foods as ...  Read Full »

My 20-month-old daughter has vomiting and diarrhea from the afternoon. What to do?

Query: Hello doctor, My 20 months old daughter did not pee last week for above 24 hours, the next day she did pee, but also vomited. On the same day, she was having a fever of 102 F, so we went to the pediatrician. He gave Vomitab, Calpol, and an antibiotic injection. From the past three days, the urine ou...  Read Full »

Do you have a question on Diarrhea or Gastroenteritis?