Ibuprofen belongs to NSAIDs (non-steroidal anti-inflammatory drugs) group which act on the substances in the body that are responsible for inflammation and its signs and symptoms. Thus, it prevents swelling, pain, and fever. 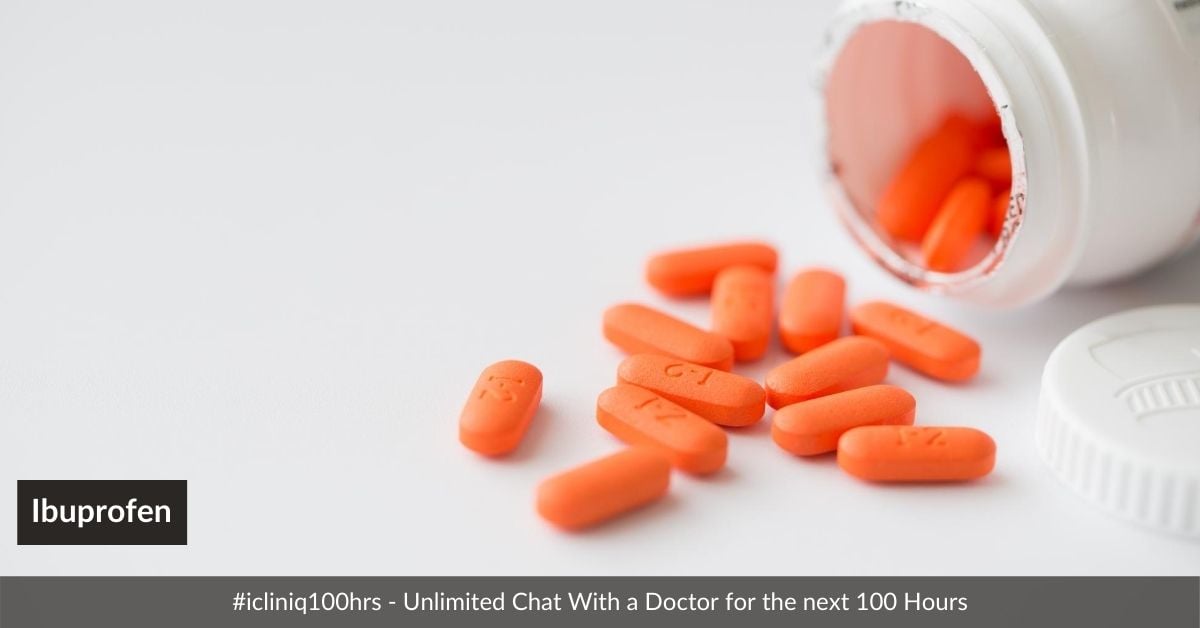 When the pain gets unbearable, it is the medicine that we turn to. One of the most commonly available or prescribed painkillers is Ibuprofen which is available in the brand names of Brufen, Nurofen, Motrin, and Advil.

Ibuprofen belongs to NSAIDs (non-steroidal anti-inflammatory drugs) group which act on the substances in the body that are responsible for inflammation and its signs and symptoms. Thus, it prevents swelling, pain, and fever. It was introduced in the year 1969. It is derived from propionic acid and is a nonselective cox inhibitor.

It is available in many forms like tablets, capsules, gels, sprays, creams, and liquids. Sometimes, it is also available as a combination drug in which it is combined with another drug to perform a specific action. Though it is available over-the-counter too, it is advisable to get it based on doctor’s prescription.

As this drug reduces inflammatory signs and symptoms (mainly pain), the following are the conditions it is usually used for:

Please suggest some painkiller for my back pain.
Fever and chills in a child of age 3 years 6 months. What can be done?
Can Aleve and Goody's powder cause stomach upset?

Side Effects of Ibuprofen

Like every other drug, this also has some side-effects, and the most commonly noticed are as follows:

Some serious and rare complications include:

In case of any unwanted reaction or symptom, it is better to consult your physician immediately to get treated.

A drug can interact with another drug to give either a beneficial effect or increase the side effects or provide unwanted reaction. Some of the interactions are as mentioned below:

As Ibuprofen is available over-the-counter too, people are more exposed to an overdose of it due to consumption without medical advice. Though the life-threatening complications are rare, it can range from mild to fatal complication. The commonly seen symptoms are nausea, headache, abdominal pain, vomiting, drowsiness, dizziness, ringing in the ear, nystagmus (involuntary eyeball movement).

Taking it during the first trimester can affect the baby and hence, should be avoided totally. Even later, it is best to avoid it and if at all required, should be taken with doctor’s consent.

As it is found to be passed through breast milk, it is better to avoid during breastfeeding also.

Though Ibuprofen is one of the valuable pharmacological therapy available over-the-counter for multiple diseases and is a commonly taken drug for pain, it is advisable to have a detailed knowledge about it before consuming it so that any unwanted effects can be avoided. When in doubt, you can consult a physician online with the help of online medical platforms and be aware and updated.

I have pain in my heels which did not get better with any painkiller. What to do?

Query: Hello doctor, I am a 24 year old male. I have a pain in my heels from three to four months. I used a lot of painkillers like Ibuprofen, Voltral, Nims, Dicloran inj, Brexien, Movax, Muscoril, Rotec, Bonate, Carlex D, and Vitamin D inj. and Methicobal inj. etc, but the result is zero. I also try to w...  Read Full »

Query: Hello doctor, I am a female, 27 years old, 50 kg, 162 cm. Just before sleeping at 11:30 AM, I took two Panadol advance pills and one Muscerol 3 pill altogether. I have not eaten for the last five hours earlier. Later that night, I woke up around 2 AM feeling nausea which lasted for a few minutes. S...  Read Full »

Article Overview: Fever is a non-specific symptom. When babies have fever, it can be traumatic for the parents as well, because they are unsure of what is causing it and how to soothe the baby. Adding to their anxiety, the baby is unable to explain his/ her discomfort in words. This article deals with how to take care of a baby who is down with fever and when to seek medical help. Read Article

Fever is not an illness by itself, but a symptom. It can be due to virus or bacteria. Viral fevers that come with the common flu or cold tend to subside within three days. They do not require antibiotics as these medicines have no effect on the virus. On the other hand, bacterial fevers like urinary...  Read Article

Do you have a question on Fever or Pain Killer?