Chronic sodium urate nephropathy results from the deposition of monosodium urate crystals in the kidneys. This article will guide you through it. 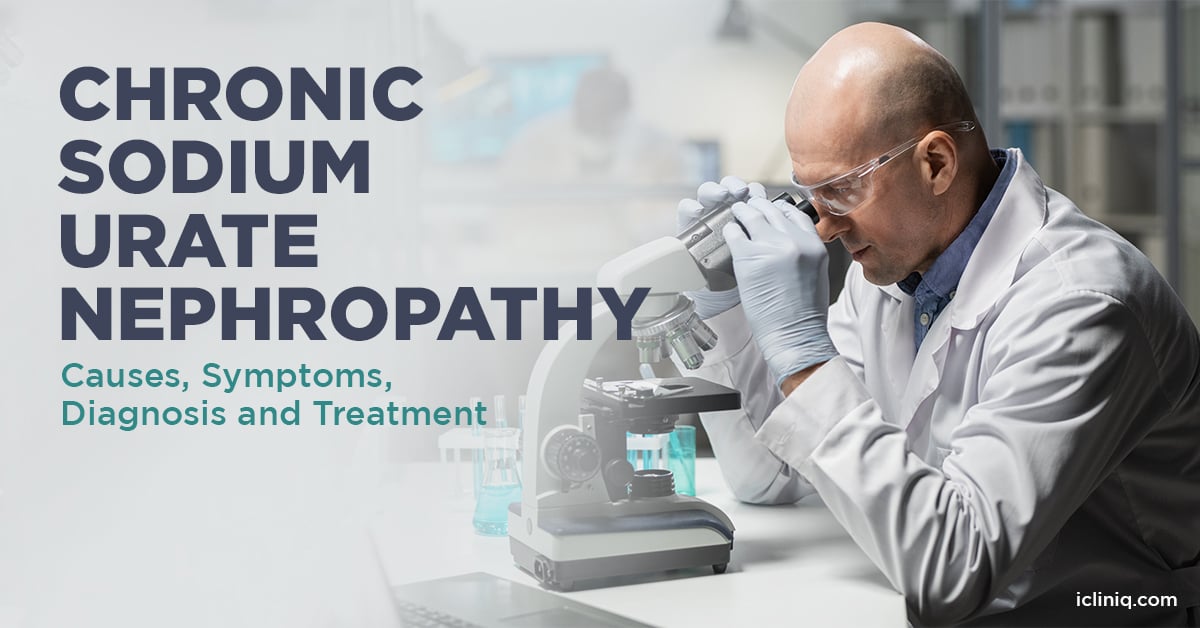 What Is Chronic Sodium Urate Nephropathy?

Gout nephropathy, also called sodium urate nephropathy, is caused when there is excessive production of urate, reduced uric acid excretion, and a high level of uric acid in the body. The deterioration of the kidney function occurring in the patient suffering from gout is called gout nephropathy. It is a form of chronic inflammation of tubulointerstitial cells which is caused by the deposition of monosodium urate crystals in the distal collecting tubules and medullary interstitium. The presence of a chronic increase in uric acid and gout is responsible for chronic urate nephropathy.

It is a form of arthritis that is caused due to high levels of uric acid in the body. These urate crystals deposit in the joints leading to gout arthritis. It is a purine metabolism disorder leading to increased levels of uric acid (hyperuricemia) and urate crystal deposition inside and around the joints. It is characterized by tenderness in joints, inflammation, and severe pain. It generally affects the toes of the foot. On blood examination, mild to moderate proteinuria, a little increase in serum creatinine, and a marked increase in serum uric acid levels can be found.

What Is Uric Acid?

What Are the Symptoms of Chronic Sodium Urate Nephropathy?

The sodium urate nephropathy is asymptomatic until it leads to kidney failure. The sign and symptoms include -

The treatment modality includes relieving the pain and symptoms and reducing the risk of complications and the recurrence of symptoms.

Who Is at the Risk of Getting Chronic Sodium Urate Nephropathy?

What Are the Preventive Measures for Chronic Sodium Urate Nephropathy?

Patients suffering from obesity, hypertension, and diabetes mellitus are at a higher risk of developing sodium urate nephropathy. Dietary changes and maintaining a healthy lifestyle are two preventive measures for any type of kidney disease. Symptoms of gout nephropathy can be managed by drinking plenty of water. Putting ice on the affected joints can relieve the pain temporarily. Limiting the stress on the joints can further prevent inflammation and pain in the joints. In the case of gout nephropathy, food containing high levels of uric acid should be avoided. The risk of further complications can be prevented by following a healthy lifestyle.

How Is Chronic Urate Nephropathy Explained?

Chronic urate nephropathy or gout nephropathy is characterized by the accumulation of urate crystals in the DCT (distal collecting tubules) and the interstitium of the kidney. It also includes:
- Decreased uric acid excretion.
- A high amount of uric acid in the blood.
- Increased production of urate.

What Is the Treatment for Urate Nephropathy?

The treatment for urate nephropathy mainly focuses on relieving the symptoms and preventing complications. It includes:
- Drugs such as corticosteroids and non-steroidal anti-inflammatory drugs (NSAIDs) reduce pain and inflammation.
- Other uric-acid lowering medications include Allopurinol and Febuxostat.
- Dialysis or kidney transplants may be considered to limit the disease progression.

How Is Gouty Nephropathy Caused?

The occurrence of gouty nephropathy is associated with the following:
- Lung cancer, breast cancer, or adenocarcinoma.
- Seizures or eclampsia.
- Chronic arthritis.
- Obesity.
- Advanced age.
- Patients who are under treatment for lymphoma or leukemia.

What Are the Clinical Features of Nephropathy?

What Is the Most Common Cause of Nephropathy?

What Is the Prognosis of Chronic Sodium Urate Nephropathy?

The prognosis is low in patients with chronic nephropathy associated with gout. It may result in a life-threatening complication, that is, kidney failure. In such cases, the doctor may suggest dialysis or kidney transplant to improve the survival rate. The other factors that worsen the situation are obesity, high levels of uric acid in the blood, dehydration, etc. Therefore, it is essential to maintain a proper diet and weight to prevent complications.

The urate or uric acid nephropathy means the same; that occurs due to the accumulation of monosodium urate crystals in the distal collecting tubules of the kidney. Therefore, it is characterized by the blood's high uric acid levels and decreased excretion. It causes the following signs and symptoms:
- Blood in the urine.
- Joint pain.
- Decreased urine output.
- Abdominal pain.

Is It Possible to Treat Chronic Sodium Urate Nephropathy Completely?

The acute form of sodium urate nephropathy can be reversed with medications and diet to reduce uric acid levels in the body. However, chronic sodium urate nephropathy is not entirely treatable, and the doctor may suggest medications to relieve the symptoms and limit disease progression. Therefore, early diagnosis of such disorders is necessary for preventing complications such as kidney failure.

Introduction Since the pandemic’s entry in December 2019 various disease control strategies have been formulated and followed from time to time. Though they seem to bring the situation under control viral mutations and the advent of newer variants are continuously challenging global health. The ca...  Read Article

My creatinine level is 2.0. Which is the best medication?

Query: Hello doctor, My creatinine level is 2.0. What is the best medication?  Read Full »

Article Overview: Do you often have episodes of hunger, nausea, sweating, and trembling? These can be signs of hypoglycemia. Read its causes, symptoms, diagnosis, and treatment options. Read Article

Blood sugar levels are one of the important criteria for the better functioning of the body. It can sometimes rise or fall in people and causes pathologic state. A decreased level of blood sugar is called hypoglycemia. Unlike hyperglycemia, it needs immediate management and it can be caused due to v...  Read Article

Do you have a question on Kidney Disorders or Nephropathy?