Heavy and unscheduled menstrual bleeding can affect the quality of a woman's life and affect her physically and emotionally. Learn about the common causes and treatment options for severe, painful, and irregular menstrual bleeding. 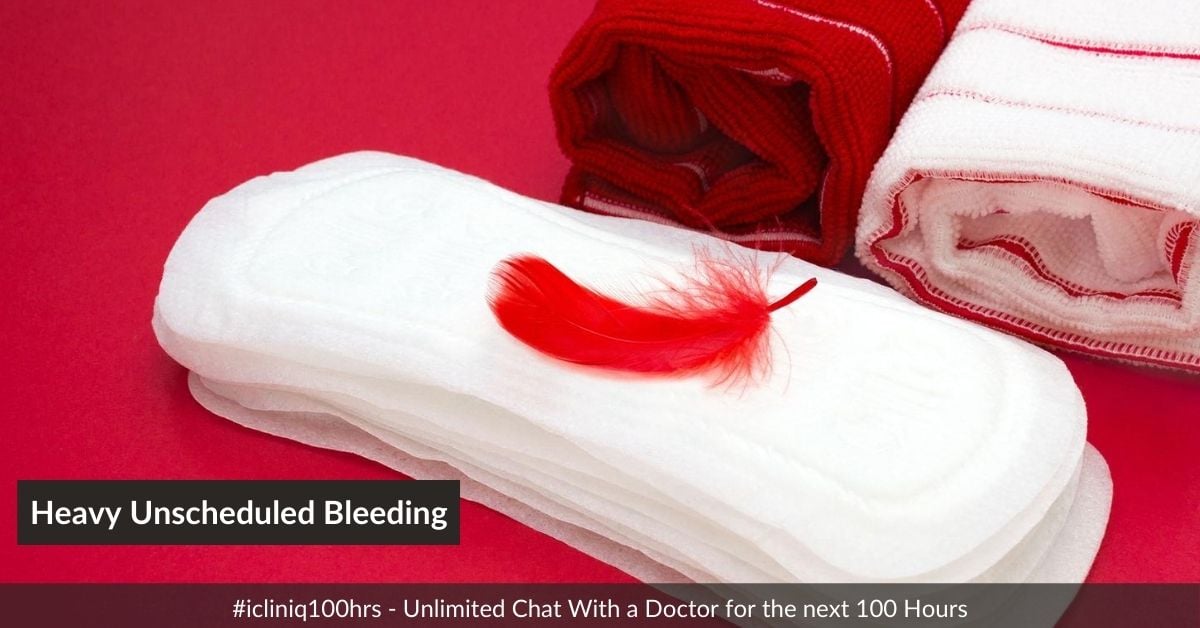 Menstrual bleeding affects the quality of a woman's life and impacts her physically, emotionally, and socially, with or without mild to severe signs and symptoms, and it needs attention. Mostly longer, anovulatory cycles have been observed at and after puberty, whereas frequent and short interval cycles are seen in older women.

Menorrhagia is the cause of around 20 % of gynecologist referrals to hospitals where one in 20 ladies of reproductive age consults a GP (general practitioner) with heavy bleeding. 20 % of ladies have a hysterectomy (removal of the uterus) before 60 years of age due to heavy bleeding.

If periods are unacceptably heavy with or without symptoms, that is, there may or may not be clotting and flooding (not necessarily more significant than 80 ml per cycle), then they need investigations and treatment to prevent further complications like anemia, endometrial hyperplasia, and endometrial cancer.

What Are the Causes of Heavy Bleeding?

Pain during menses (dysmenorrhea) is unacceptable, mainly in the first two days of bleeding. The following are the causes of dysmenorrhea,

Related Topics
I got heavy bleeding after taking Krimson. Is it normal?
Is abnormal vaginal bleeding a sign of reproductive cancer?
Having on and off heavy bleeding other than normal menstruation. Why?

How Is Heavy Unscheduled Bleeding Diagnosed?

What Is the Treatment for Heavy Unscheduled Bleeding?

For managing any of the conditions mentioned above, the patient's wish and convenience are crucial. Following are the treatment modalities:

In short, heavy, irregular, unscheduled painful vaginal bleeding needs to be investigated and treated according to the patient's need, wish, and convenience to improve the quality of life and to prevent long-term consequences like endometrial cancer.

Why does bleed severely during menses?

Query: Hello doctor, My wife is suffering from menstrual cycle problem. She is bleeding too much and her period continues for 7 days. Due to this,  low BP, headache and lower back problem has started. Since last two years she is feeling weak and less energetic. Kindly suggest good medicines preferably ge...  Read Full »

I have irregular heavy bleeding. Is something wrong with my uterus?

Query: Hello Doctor, I am an 18 year old female. I had my normal period last week and it lasted for 7 days. Then three days after this it started again and was really heavy.This happens almost every month. Is something wrong with my uterus?  Read Full »

Does ectopic pregnancy cause heavy bleeding, spotting, and abdominal pain?

Query: Hello doctor, I am 21 years old. I decided to contact you because I do not know what to do. I had sex with my husband, and then we found out that he had a chlamydia infection. Since then, I am feeling sick all the time. My stomach was hurting a lot, and I had problems with passing urine, and it sta...  Read Full »

Do you have a question on Intermenstrual Bleeding or Abnormal Uterine Bleeding?