Swelling of the labia minora is a common condition among women and can be treated if diagnosed at an early stage. Read the article to learn more about it. 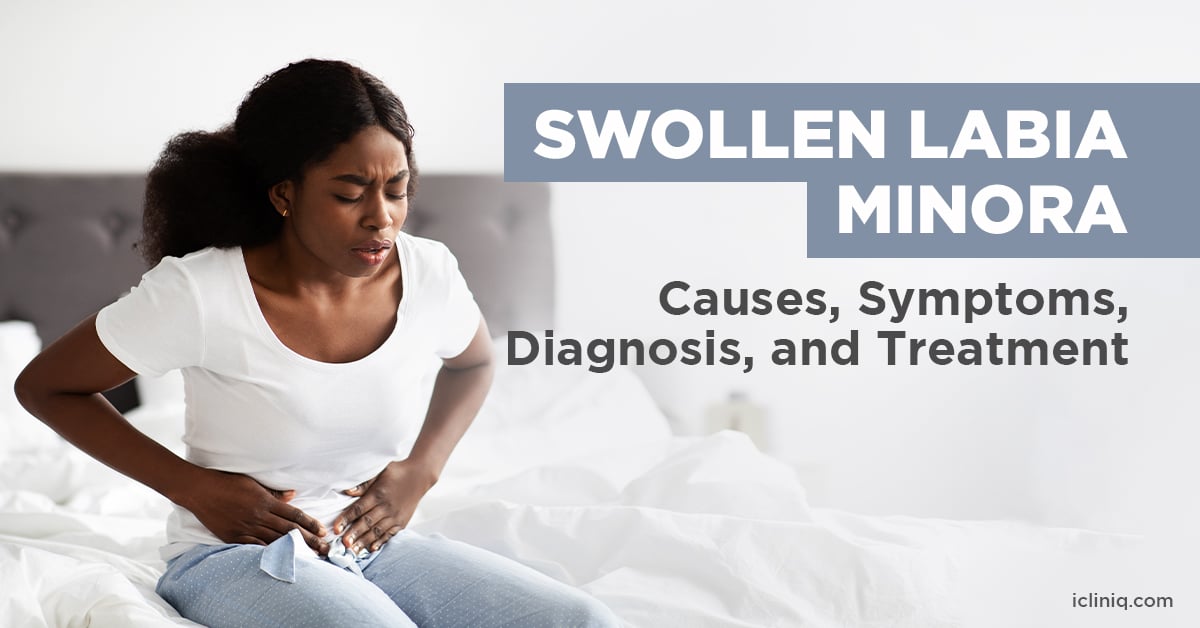 The labia or lips are the skin folds present near the vaginal opening. They form an integral part of the female reproductive tract. The labia act like barriers and protect the internal reproductive organs like the vagina, clitoris, and urethra from getting damaged or infected. The female body comprises two pairs of labia. The outer pair of labia or lips is the labia majora, whereas the inner pair is the labia minora. There is a vast structural difference between the labia majora and labia minora. Labia minora are fleshy and surrounded by pubic hair.

In contrast, labia minora lacks fatty tissues and extends from the clitoris to the vaginal opening. The size of the labia varies from person to person, and that is alright. Sometimes, the labia minora of one side might be longer than the other. Also, the color of the labia varies according to the age of a woman. For example, young females are likely to have pinkish labia, whereas elderly females have brownish-black labia. The problem arises when infections, cysts, and other pathologic conditions cause swelling and inflammation of the labia.

What Are the Causes of Swollen Labia Minora?

Labia minora is a sensitive structure of the female genital tract and consists of delicate tissues susceptible to swelling and infection. The common causes of swollen labia minora are listed below:

1) Yeast Infection - Studies have reported that 75 % of women experience yeast or fungal infection once in their lifetime. Yeasts and some healthy bacteria are normally present in the body in small amounts. However, the problem arises when yeasts outgrow the healthy bacteria and cause infection. The most common culprit is Candida because it can cause swelling, itching, and burning of the labia and the entire vaginal area. In addition to these symptoms, some females might see a white or cottage cheese discharge from the vagina. The factors that increase the risk of yeast infections are listed below:

3) Trichomoniasis - Trichomoniasis is a sexually transmitted disease that affects 3 % of women of reproductive age. A parasite causes it, and in most cases, people do not present with any symptoms. The symptoms of trichomoniasis are listed below:

4) Allergies - If the woman presents with swollen labia but does not have an active infection, it is more likely to be due to allergies and infections. Labia minora might swell due to allergy to the following substances:

5) Bartholin’s Cyst - Bartholin’s cyst occurs due to the blockage of Bartholin's glands. These glands are located outside the vagina on either side of the vaginal opening. The main function of these glands is to keep the vagina moist and lubricated for sexual intercourse. Infection, pain, and buildup of pus in the glands cause Bartholin's cyst. Due to this, the labia become tender and swollen.

6) Sexual Intercourse - Females involved in sexual activity without lubrication are likelier to have swollen labia. It is because a lot of friction gets generated during sex, damaging the labia and entire vaginal area.

What Other Symptoms Are Associated With Swollen Labia?

How Do the Doctors Diagnose Swollen Labia?

The doctors usually diagnose swelling of the labia minora based on the following diagnostic methods:

How Should a Swollen Labia Minora Be Treated?

The treatment depends upon the factors that caused the swelling of the labia minora. The treatment options are described below:

Medications and Surgery - Swelling in the labia minora occurs for various reasons, and surgical intervention is required in rare cases. Females having swollen labia minora due to allergy or sexual intercourse might benefit from steroid creams. If yeast infections cause swollen labia minora, the doctor might recommend over-the-counter or antifungal drugs to overcome the infection. These drugs can be applied topically or taken orally. Antibiotics can be taken if labia appear swollen due to trichomoniasis or bacterial vaginosis. Surgical drainage is usually done in the case of Bartholin’s cyst.

Tips for Prevention and Self-Care:

Labia minora is a part of the female vagina and is prone to infections, swelling, inflammation, and cysts due to several reasons. According to the studies, approximately 30 % of females develop swelling in the labia due to bacterial or fungal infections. However, the patient need not worry because it is not a life-threatening condition. Several home remedies and topical medications are available to treat swelling and infections. So, the patient must not feel embarrassed and consult the doctor at the earliest to learn more about the management and prevention of swollen labia minora.

Do you have a question on Swollen Labia Minora or ?