Tablet Dolo 650 mg is the most common tablet used during a fever and to relieve pain. Read about its uses, dosage, side effects, drug warnings, interactions, precautions, and more. 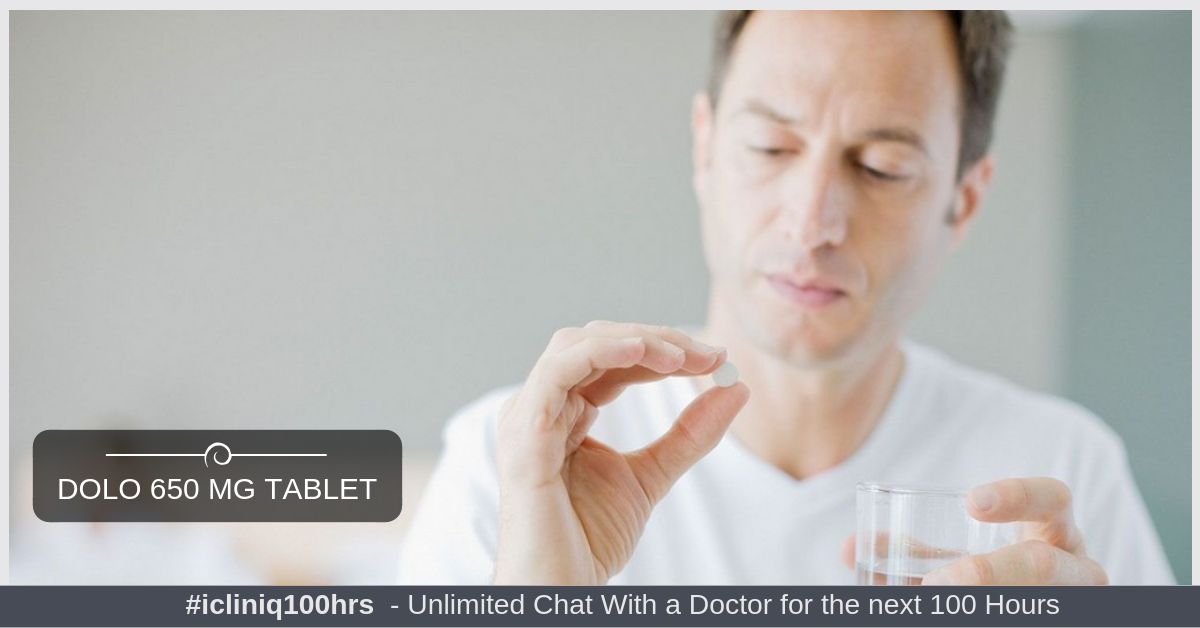 Dolo 650 is the most common medicine used during a fever and to relieve mild to moderate pain. This tablet effectively reduces fever and mild to moderate pain. The fever-reducing action is achieved by inhibiting the production of certain chemicals in the body and by increasing the loss of heat from the body. This tablet inhibits the signals of pain that are sent to the brain, as a result, the pain experienced by the person is reduced after taking it.

Paracetamol is the main constituent of Dolo 650. It is also used to reduce body pain during a fever. Paracetamol is prescribed alone or in combination with other drugs for cancer and post-operative patients for pain relief. The usual dosage for adults is 1 to 2 tablets every four hours if needed, but it should not exceed 4000 mg in a day.

What Is the Composition of Dolo 650?

Dolo 650 contains Paracetamol (Acetaminophen), which belongs to the group called aniline analgesics. It does not belong to the non-steroidal anti-Inflammatory drugs (NSAIDs) group of medicines as it is not very effective against inflammation. Paracetamol is typically used to reduce fever and pain.

It is considered to be the safest drug and the first line of treatment for fever, as the side effects are very rare. It is the most easily available over-the-counter-drug.

It is mainly used to reduce fever (antipyretic) and pain (analgesic). It is majorly used as a painkiller for moderate pain. Dolo 650 can be used in the following conditions:

Dolo 650 works as an antipyretic (against fever) by inhibiting the synthesis of prostaglandins, which are mediators of inflammation. They decrease the concentration of prostaglandin. And the analgesic (painkiller) action is the result of inhibition of cyclooxygenase-1 (COX-1) and COX-2 cascading pathways. The analgesic action is by activating the descending serotonergic pathways by the drug. 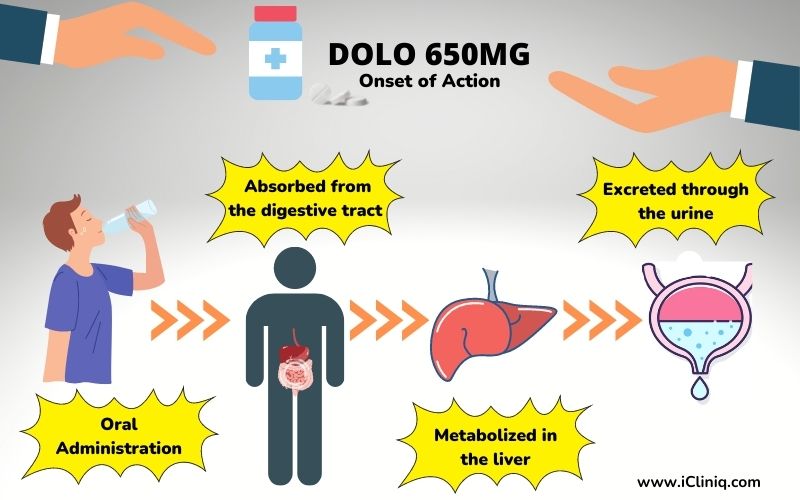 On taking Dolo orally, it is actively absorbed from the digestive tract, and it takes roughly 1 hour for the onset of action. The action lasts for around 6 hours. A minimum of 4 hours gap should be given between two consecutive doses.

Related Topics
Can I take Paracetamol tablets for my severe tooth pain?
Fever and chills in a child of age 3 years 6 months. What can be done?
Fever in Babies: When to Call the Doctor

Paracetamol is predominantly metabolized in the liver, and 85 to 95 % of the drug is excreted within 24 hours through the urine.

There are no reports of habit-forming tendencies with Dolo 650.

The expiration date is 4 years after the date of manufacture for Dolo 650. Look at the instructions behind the leaflet before you take this medicine.

Normally, the dosage is calculated by the weight and age of the patient by the physician. So, the dosage varies from person to person. But, the recommended dosage is 500 to 1000 mg every 4 to 6 hours for adults, until the symptoms last. The maximum dosage is 4000 mg per day.

There is no side effect on missing a dose, so you can take the next dose whenever you remember.

For kids, the dosage is calculated by their weight. The recommended dosage is 15 mg of Paracetamol per kilogram of the child’s weight. 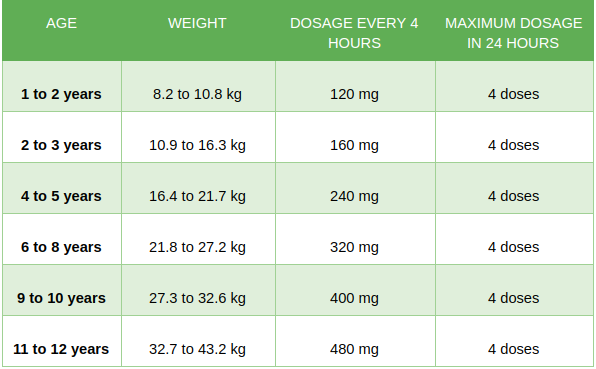 Consult a doctor to know the dosage for infants below 1 year.

Like all other drugs, there are few things that one needs to consider before taking this tablet. Inform the physician if you have any of the following conditions:

What Are the Side Effects of Dolo 650?

No serious side effects have been seen with the use of Paracetamol if taken under the recommended dosage. Indiscriminate and long-term use of Dolo 650 might cause the following side effects:

Dolo 650 if taken higher than the recommended dosage in a short period of time results in paracetamol poisoning or toxicity. Paracetamol poisoning is a serious condition and it requires immediate medical attention. Paracetamol toxicity presents itself in three stages. Usually, there are no definitive symptoms in the first 24 hours after the overdose, which is the first stage of poisoning.

In the second stage, which lasts from 24 to 78 hours after the overdose, the patient may present with the following symptoms:

If left untreated, during the third stage, it may lead to damaged liver function, reduced kidney function, multiple organ failure, brain damage, and ultimately death. The third stage lasts from the third to the fifth day.

N-Acetylcysteine is used in the treatment of Paracetamol poisoning. It can be used up to 24 hours after the overdose, but it works best if given within 8 hours.

What Are the Interactions of Dolo 650?

All drugs interact with other drugs, food, or supplements and result in certain side effects. So if you are taking multiple tablets or have a pre-diagnosed condition for which you are under medication, it is best to tell your doctor about them. The doctor will then prescribe substitute drugs or alter the dosage accordingly. The common interactions are:

What Are the Substitutes for Tablet Dolo 650?

Other drugs that have the same composition are:

Only taking Paracetamol might not cure your illness completely, so it is advisable to consult your doctor before taking this or any other tablet. For severe pain, Paracetamol is given in combination with Caffeine, as it increases its pain-relieving capacity. As it interacts with other drugs and causes some side effects, it is always safe to get the doctor’s opinion before taking Dolo medicine.

This medicine is highly effective in reducing fever, and can provide some relief from mild to moderate pain. It is commonly used to treat fever, headaches, back pain, menstrual cramps, and joint pains.

How long does Dolo 650 stay in blood?

Dolo starts producing action within an hour of administration. The action lasts for around 4 to 6 hours. Most of the drug is excreted from the body through urine in a day.

One or two tablets of Dolo 650 can be taken every four hours in a day. But the total dose should not exceed 4000 mg. So it is safe to take around 5 to 6 tablets a day.

Yes, Dolo is used as a painkiller. It treats mild to severe pain like headaches, menstrual cramps, ear pain, etc.

Can I take Dolo 650 on an empty stomach?

Are Dolo 650 and Paracetamol same?

Yes, Paracetamol and Dolo 650 are the same. Dolo is just a brand name for Paracetamol.

What is the dosage of Dolo 650 for kids?

Dolo 650 is relatively safe if taken as prescribed. Follow the instructions properly to avoid any side effects. If you are an alcoholic or have a liver disease, it is best to avoid or limit the use of this medicine.

Can I take Dolo 650 for mild fever with a headache?

Yes, Dolo is very effective in treating mild fever with headache. If you do not feel better even after taking this medicine, it is best to consult a doctor.

Is the Dolo 650 an antibiotic?

Does Dolo 650 cause sleepiness?

No, this medicine does not cause sleepiness as it does not have any sedative action.

Can I drive after taking Dolo 650?

Yes, you can drive even after taking this tablet as it does not cause dizziness or lightheadedness.

Is it safe to take Dolo 650 during pregnancy and breastfeeding?

It is best to consult a doctor before taking Dolo 650 if you are pregnant or breastfeeding. No side effects have been noted with the use of Dolo during pregnancy and breastfeeding, but always take it under strict medical supervision.

What are the contraindications for Dolo 650?

This medicine is contraindicated for patients with Paracetamol allergy and hepatic and renal impairment.

There are some reported cases of Paracetamol allergy. If you notice signs like swelling of the mouth, face, and throat, difficulty breathing, and skin rashes after taking Dolo 650, get immediate medical help.

This medicine does not induce sleep or cause lightheadedness as it does not work on the central nervous system.

Both these tablets contain Paracetamol (Acetaminophen), and are basically the same tablet. They are just different brand names.

No, tablet Dolo 650 mg is not banned by the Indian government.

Can Dolo 650 overdose cause death?

Yes. Taking more tablets than prescribed can result in Paracetamol toxicity, which can lead to acute liver failure and death.

Can I take Dolo 650 after alcohol?

Avoid drinking alcohol while taking Dolo 650 or any other painkiller, as it can severely damage the liver.

Yes, Dolo 650 is safe in dengue. As there is no specific drug to treat dengue, medicines are only given to relieve symptoms. So if you are suffering from dengue, Dolo 650 can help lower fever and reduce joint pain.

Does Dolo 650 cause sweating?

Yes, it does. Dolo 650 activates sweating, which is the natural mechanism of the body to reduce body temperature. This is how this medicine reduces fever.

This medicine is actively absorbed from the digestive tract, and it takes about 1 hour for it to start working.

Does Dolo 650 cause miscarriage?

It does not cause miscarriage if taken during early pregnancy. But take any medicines during pregnancy or breastfeeding only after consulting your doctor.

It is very unlikely for Dolo 650 to delay periods.

Are Dolo 650 and Ibuprofen the same?

No, Paracetamol (Dolo 650) and Ibuprofen are not the same. Ibuprofen has anti-inflammatory property, as it can reduce swelling all over the body. Dolo 650 does not reduce inflammation.

Are Dolo 650 and Aspirin same?

Aspirin and Paracetamol are both painkillers, but they are not the same. Apart from pain relief, Aspirin also reduces inflammation and is a blood thinner.

No, as it is not an NSAID, it does not reduce inflammation.

No, as it is not an NSAID, it does not reduce inflammation.

Can I take Dolo 650 with Amoxicillin?

Yes, you can take Dolo 650 with Amoxicillin. Except Isoniazid, Paracetamol can be used with almost all other antibiotics.

Can I take Dolo 650 and Sinarest together?

Sinarest already contains Paracetamol, so it is not advisable to take both these tablets together.

You can use this medicine for leg pain. But if pain persists even after taking painkillers, consult a doctor to find the cause.

Yes, it is the safest painkiller even for patients with kidney disease. But always consult your doctor before taking it.

Is Dolo 650 safe for heart patients?

Can Dolo 650 be used for weight loss?

No, Paracetamol is not known to cause weight loss.

Dolo 650 will not treat a runny nose, but it will help reduce fever and body pain associated with a cold.

If I had six Paracetamol tablets and seven of Mefenamic acid, how bad can it be?

Query: Hello doctor, I am 18 years old. What if I have six tablets of 500 mg Paracetamol (Crocin advance) and seven tablets of 500 mg Mefenamic acid (Ponstan forte) in one go (within five minutes)? How bad will it be? What will the side effects be?  Read Full »

Why do I have a bloody spot near the back of my throat?

Query: Hi doctor, I have been having some issues with my throat from the past couple of months. I feel a tightness in the neck. I do not have a runny nose, but I have post-nasal drip and lots of phlegm or mucus in the mornings. I feel like I need to clear my throat a lot. The symptoms seemed to go away fo...  Read Full »

Do you have a question on Fever or Paracetamol Poisoning?