There is an enormous shift in attitude among the youth towards sex. Although they are leading a modern lifestyle, they are often caught up in unfamiliar situations. This article aims to create more awareness regarding the popular 'morning-after' pill and how to use it correctly to avoid an unplanned pregnancy. 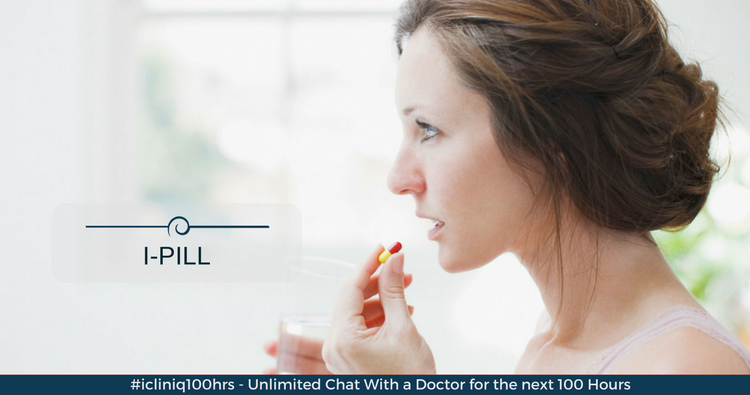 Accidents do happen. That is the reason we have emergency contraceptive pills such as I-pill available. However, these are not regular birth control pills. They are meant to be used only in emergency situations.

They are never to be used as the primary method of contraception. Also, this tablet is recommended for use by women aged 25 to 45. It is important to note that it is not intended to be used by teenagers whose reproductive organs are still maturing.

The active ingredient enters the bloodstream and blocks the formation of luteinizing hormone and follicle-stimulating hormone. These hormones are responsible for the development and release of eggs from the ovaries. So, emergency contraceptive pills work depending on the reproductive cycle by delaying ovulation.

What Is I-Pill Used For?

I-pill is the quick solution if you are worried about an unplanned pregnancy after:

I-pill is to be used only before a pregnancy is established. It does not cause abortion in an already pregnant woman. Also, it does not affect pregnancy.

During menstruation, the mature eggs are released from the ovaries, and it is called ovulation. The ovaries produce progesterone, the female sex hormone, to avoid the release of more eggs and prepare the womb (uterus) for pregnancy.

Depending on where you are in your cycle, the I-pill works in two ways to prevent pregnancy.

The Onset of Action:

These are not regular birth control pills and are meant to be used only in emergency situations. It should be taken orally within 24 to 72 hours of having unprotected sex because the sooner the pill is taken greater the effect. Therefore, it is most effective when taken immediately after the act for up to 24 hours and is advised to be taken within 72 hours (90 to 95 % effective). The effectiveness comes down to 85 % when taken from 25 to 48 hours after and to 58 % when taken between 49 to 72 hours after. If it is taken after 72 hours, it may not work at all. 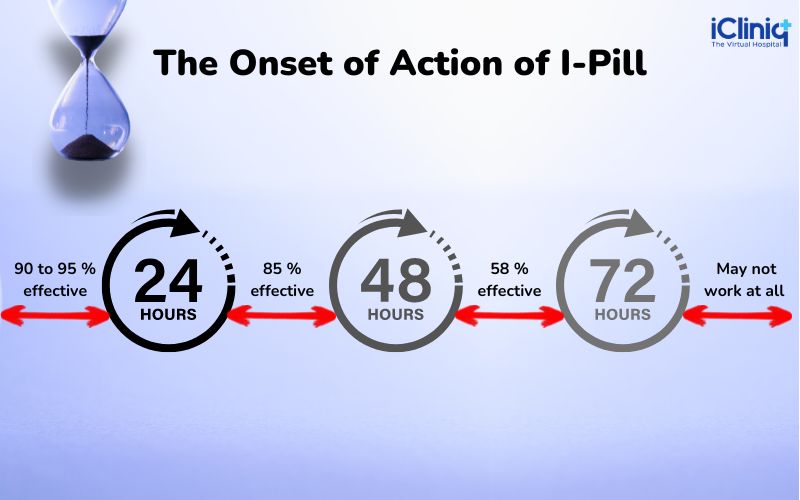 What Is the Dosage of I-Pill?

It comes as a single tablet box which is to be taken with water after food to prevent vomiting. It should not be taken regularly and should be used for emergency purposes only. This is because I-pill contains high doses of hormones that can alter the hormonal response of the body when taken on a regular basis. If you vomit within three hours after taking the I-pill, it is recommended to take another I-pill as quickly as possible. In case of any doubts or side effects, consult a doctor. Follow-up with the doctor after three weeks of taking I-pill to rule out pregnancy, both uterine and in the tube.

What Are the Side Effects of I-Pill?

Short-term side effects include:

When a heavy dose of I-pill is taken, most of the side effects occur.

What Are the Interactions of I-pill?

I-pill does not cause adverse effects when taken with other medications. But sometimes, it modifies the metabolism and pharmacological activity of various other drugs such as:

So, it is better to consult a doctor before taking an I-pill with other medications.

What Happens When I Take an I-Pill Without Sperms Entering?

If you had an unprotected exposure but are not sure of your risk of getting pregnant, it is still recommended to take an I-pill as there are no special side effects if taken when you were not exposed to sperms.

When Should I Use Regular Birth Control Again?

If you took an I-pill because you missed taking your regular oral contraceptive pills for three days in a row, you could start using your regular pills from the next day onwards.

Reason for Bleeding After Intake of I-Pill

Many women have intermenstrual spotting or bleeding, commonly known as 'withdrawal bleeding' five to seven days after taking I-pill. But, if you do not get your periods within three weeks, it is advised to take a pregnancy test.

While the I-pill is not proven to affect fertility and future pregnancies directly, they are hormonal pills that are meant to disrupt the natural cycle of the body. So, when it is taken more than twice in a span of six months, it can throw the menstrual cycle off balance and make ovulation unpredictable. Your periods can become irregular, and the flow can become heavier or lighter.

I-pill prevents pregnancy from happening in the first place. It is to be used only before a pregnancy is established. It does not cause abortion in an already pregnant woman. It has no effect on pregnancy.

If you miss your period even after taking an I-pill, it is possible that the pill did not work for you. In that case, consult your doctor for the next course of action.

I-pill has a good success rate when taken within the stipulated time. Still, like with any other type of contraception, there is a slight chance of failure with the I-pill too. So, it is still necessary to consult a doctor for a follow-up three weeks after taking I-pill to rule out pregnancy, both uterine and in the tube.

What Are the Substitutes for an I-pill?

There are few substitutes for i-pill; they are,

Consult a doctor if you do not feel good about taking an I-pill and avoid self-medication.

Vaginal bleeding and spotting are common after taking an emergency contraceptive pill, and it is called withdrawal bleeding. It normally occurs within a week of taking I-pill due to changes in hormonal levels. But if you experience severe bleeding with abdominal cramps, it is best to consult your gynecologist

Does bleeding after taking I-pill mean no pregnancy?

The bleeding that occurs after taking I-pill is called withdrawal bleeding, and it is caused due to the hormone progesterone present in the pill. If you did bleed after taking an emergency contraceptive, then the chances of pregnancy are extremely slim. But if you did not get your regular periods 25 to 30 days after taking I-pill, it is best to take a pregnancy test and consult your gynecologist

How to use I-pill to avoid pregnancy?

I-pill or any other emergency contraceptive pill has to be taken within 72 hours of unprotected sex. The earlier you take it, the more effective it will be in preventing pregnancy. It should not be used as a permanent birth control method

What is the dosage of I-pill?

One packet of I-pill contains a single 1.5 mg tablet. Only one tablet needs to be taken within 72 hours after the failure of other contraceptive methods or unprotected sexual intercourse

How does I-pill stop pregnancy?

I-pill works in the following ways:
By preventing ovulation, that is, it stops the ovaries from releasing an egg.
By making the uterine wall unfavorable for a fertilized egg to implant.
Thickens the cervical mucus

Is it safe to take I-pill after 72 hours?

Yes, it is safe to take I-pill even after 72 hours, but it might not be very effective in preventing pregnancy. I-pill is most effective if within 3 days (72 hours), but it can be taken up to 5 days

Yes, I-pill can delay your periods by a week or more. But, if you do not get periods even after 25 to 30 days of taking the pill, get a pregnancy test done.

What are the chances of getting pregnant even after taking I-pill?

Can I take I-pill during periods?

As the chances of getting pregnant are almost nil during periods, there is no use of taking an I-pill, even after unprotected sex. But, it is safe to take I-pill during periods

How many days can I-pill delay periods?

Usually, I-pill can delay periods by 7 to 10 days. Get a pregnancy test done, if you do not get periods even after 25 to 30 days of taking the pill.

When can I take a pregnancy test after taking I-pill?

If after a month of taking I-pill, you did not get periods, then take a pregnancy test.

Is one I-pill enough to stop pregnancy?

Yes, one I-pill is sufficient to prevent pregnancy, if you take it within 72 hours or before implantation takes place

My wife has spotting.There are no signs of pregnancy.Can this be the side effect of ipill?

Query: Hello doctor, Me and my wife had sex on 12th January and she took ipill on 13th January. She had her periods on 21st January. We again had sex on 25th January and 10th February with protection (condoms). On the 10th evening some spotting started and it stopped on 17th February. The spotting was dark...  Read Full »

Can unprotected sex on third day of period cause pregnancy?

Query: Hello doctor, I and my fiancee had unprotected sex on the third day of her period. I did not ejaculate inside her. And she also has the history of an irregular period but from the past three months, she is getting her regular period. I just want to know what are the chances of pregnancy.  Read Full »

What pills would help my erection last longer?

Query: Hello doctor, I want some pills which will help to last my erection for a long time during intercourse. Please suggest some pills which are available in local medical shops. Also, please list if there are any side effects of taking them.  Read Full »

Do you have a question on I Pill or Emergency Contraception?