iCliniq / Answers / Medical gastroenterology / Abdominal Tuberculosis / What is your opinion about my symptoms?

Q. What is your opinion about my symptoms?

Answered by
Dr. Happykumar Kagathara
and medically reviewed by iCliniq medical review team.
This is a premium question & answer published on Jul 07, 2018 and last reviewed on: Sep 18, 2020 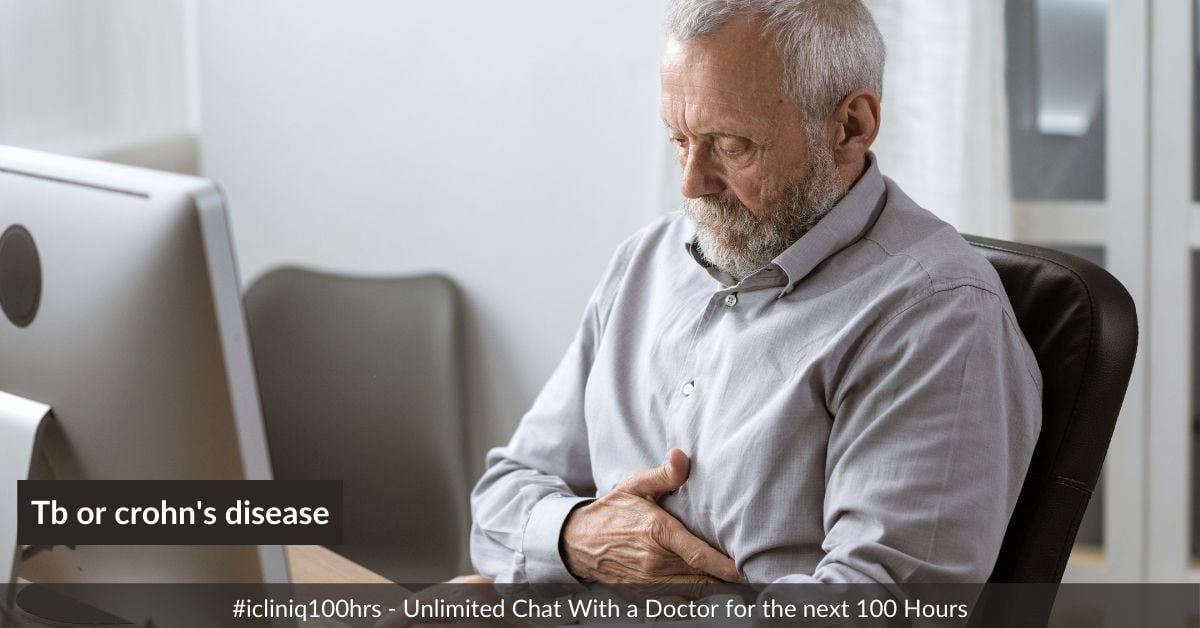 I used to have mild abdominal pain in the lower right part of the stomach. I was diagnosed with PPD six months ago and continued my regular medicine (no ATD). Since then, I occasionally get severe pain at the very same location and it lasts for around 4 to 6 hours. This pain was not regular, but may recur once in 20, 30 or 60 days. After three months, I had my USG, CT scan and colonoscopy with biopsy. The biopsy report shows that I may have either TB or Crohn's disease.

I roughly have good digestion. Sometimes, it is alright and other times become worst. I used to have regular fever for the past six to eight months during nights only. I do not have much appetite, but lately fever has gone and I started eating more. There is no blood, but sometime mucus in stool. Yes, I have vague pain in the lower abdomen. I am attaching my various reports. I already contacted a gastroenterology surgeon and he just advised me to get operated and remove the part of the affected area. However, I am very afraid of this and seeking an advice if it can be treated without an operation. I have been on liquid food for the past 20 days just to avoid any further pain, which may occur occasionally.

|
Related Questions:
Why is there green stool a day after colonoscopy?
Should my hemophiliac son receive coagulant for colonoscopy?
What is the treatment for Crohn's disease?

My abdominal pain did not reduce even after taking antibiotics. Please help.

Query: Hello doctor, I am a 52 year old female. Two weeks back, I had severe abdomen pain and got a sonography done. I have been diagnosed with amebic liver abscess. It was identified 13 days back and I was admitted in hospital for three days and was given saline and Metronidazole dosages, but still not re...  Read Full »

Can the lower abdomen pain be due to ovulation?

Query: Hello doctor, For the past two days, I am feeling a mild pain on my lower abdomen and having a feeling that my bowels are not getting cleared. I had my last period about two months back. My periods have become irregular since then. Last month, I got examined and was detected having a uterine fibroid...  Read Full »

Are my symptoms pointing towards Crohn's disease?

Query: Hello doctor,I am a 39-year-old female suffering from abdominal pain and intermittent diarrhea. Had a CT with contrast that revealed bowel wall thickening in ascending and transverse colon- possible transmural thickening, that may just be artifactual, but it did show up and warrant GI consult. Abdom...  Read Full »

COVID-19 and MIS-C (Multisystem Inflammatory Syndrome in Children)
MIS-C is a potentially fatal condition that affects children infected with COVID-19. Please read the article to know its...  Read more»I have fever, severe headache, and cough. Please help me.
I have fever since five days. My fever comes down when I take medicine but eventually comes back. I also have severe hea...  Read more»Brucellosis - Symptoms, Complications, Diagnosis, and Treatment
Brucellosis, a zoonosis, is caused by consuming unpasteurized milk or raw meat obtained from infected animals. For sympt...  Read more»