E-Cigarettes and Vaping: Are They Really Safe?

While e-cigarettes are being touted as healthier substitutes for tobacco smoking, their long-term health effects are still not clearly defined. Please read the article to know more. 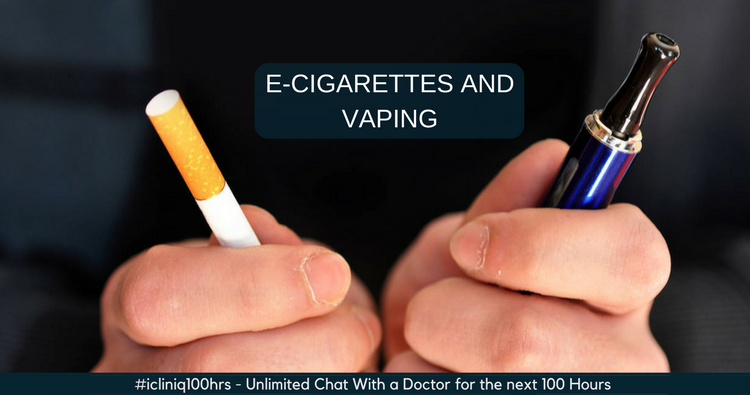 In recent years, companies selling electronic cigarettes (e-cigarettes) or vapes have proliferated. These companies are aggressively marketing their products as a better alternative to actual tobacco smoking, with a focus on how e-cigarettes do not contain the harmful substances present in tobacco. Millions of people have fallen for this marketing strategy, and even teenagers are being targeted.

What Are Known as Vaping Devices?

Vaping devices are also known as e-cigarettes or e-vaporizers or electronic nicotine delivery systems, which are battery-operated devices used by inhaling an aerosol. It contains,

E-cigarettes resemble pipes, traditional tobacco cigarettes, cigars, or even resemble the everyday items that we use, such as pens or USB memory sticks. Not only are the design and appearance of e-cigarettes the same, but they are easy to operate like our day-to-day devices like a pen, etc. Now there are more than 460 different brands of e-cigarette in the market, and some common names for e-cigarettes are:

How Do They Work?

Most e-cigarettes consist of four different components. They are,

Why Do People Use E-Cigarettes?

Smoking is considered to be the leading cause of preventable death. The harmful substances in tobacco, including tar, are known to be carcinogenic. Millions of lives are lost each year due to smoking-related diseases such as lung cancer and chronic obstructive pulmonary disease (COPD). That is the reason a significant benefit from e-cigarettes is claimed. The e-cigarette is believed to be a helpful tool in making tobacco smokers quit smoking, thereby decreasing their risk for diseases caused by smoking tobacco. E-cigarettes give smokers their nicotine fix, supposedly without the other harmful substances in tobacco.

How Do E-Cigarettes Affect the Brain?

The nicotine present in e-liquids can be readily absorbed in the lungs and enters the bloodstream when a person inhales an e-cigarette. When it enters the bloodstream, nicotine starts to stimulate the adrenal glands, and it releases the hormone epinephrine (adrenaline). This epinephrine hormone starts to stimulate the central nervous system (CNS) and increases blood pressure, breathing, and heart rate. With most addictive substances, nicotine starts to activate the brain's reward circuits and also increases dopamine levels which are the chemical messenger in the brain that reinforces rewarding behaviors. The pleasure obtained from nicotine's interaction with the reward circuit motivates some people to use nicotine repeatedly, despite risks to their health and well-being.

The main reason why e-cigarettes are very popular is that a majority of the users believe them to be a cleaner, healthier, and trendier alternative. With thousands of available flavors in the market, there is a flavor for everyone.

Unfortunately, e-cigarettes or vapes are not as safe as they seem. Although manufacturers claim that the flavoring ingredients are 'food grade' and are labeled GRAS (generally recognized as safe), these claims are only applicable for additives designed for food or ingestion and not for breathing or inhalation. A substance that does not irritate the stomach may irritate and cause inflammation and disease in the lining of the respiratory tract, including the lungs. Remember that the types of cells in the stomach (which is a highly acidic environment) are very different from the kind of cells in the lungs (which are only designed to deal with air and blood).

Contrary to the claims by manufacturers that e-cigarettes do not contain harmful substances, many types of research have proven otherwise. Substances that can be found in e-cigarettes include diacetyl or acetyl propionyl, which is associated with the irreversible and disabling lung disease called bronchiolitis obliterans. Other substances present in e-cigarette liquids include benzaldehyde, acrolein, and formaldehyde. Formaldehyde is the substance used to preserve cadavers and other biological specimens in laboratories and is known to be carcinogenic (in general, they are dangerous and addictive).

So, How Safe Are They?

Because e-cigarettes underwent mass production only a few years ago, the actual long-term adverse effects remain to be seen. It is the potential for long-term harm that most clinicians are concerned about. This is also the reason why regulatory bodies have not approved them for medical use.

What Are the Risks Associated With E-Cigarettes?

People who use e-cigarettes bypass many of the health risks of tobacco smoking, providing a healthful alternative. Because of this, many people start to quit smoking, but also there is growing evidence that e-cigarettes are posing serious health risks, especially to people who do not smoke traditional cigarettes. So, using e-cigarettes is not recommended in:

What Are the Benefits of Avoiding E-Cigarettes?

The reasons why e-cigarettes can be harmful are,

E-cigarettes contain nicotine, and they are dangerous because of:

2) Presence of Other Toxins:

There are other toxins along with nicotine. They are,

People who were using traditional cigarettes and switched to e-products may need medical help or tools to help them with quitting. It is also found that people who use or have used e-cigarettes are less likely to stop smoking altogether.

Vaping produces secondhand smoke as it contains the same chemicals as traditional cigarettes, and this smoke may be toxic to people nearby.

E-cigarettes are marketed as they are not harmful and contain only flavoring agents. This starts to tempt people, especially teenagers.Vaping at early ages of life can increase the chances of ordinary smoking later in life.

History is the best teacher. Remember the episode involving diethylstilbestrol (DES) and clear cell vaginal adenocarcinoma? Between the 1930s to the 1980s, DES was being prescribed to pregnant mothers as a way to prevent miscarriage. In the 1960s to 1970s, their young daughters were diagnosed with clear cell adenocarcinomas. The link between DES exposure and this type of cancer was eventually discovered by physicians of the Massachusetts General Hospital in Boston. Hopefully, the story of e-cigarettes will not turn out to be a similar story as like DES, which time only can tell.

Query: Hi doctor, I can barely open my mouth up to three fingers space. Is it bad or normal? I have never noticed this before, only recently I happen to see this. I chew tobacco. Is that causing it? Is it serious?  Read Full »

Do you have a question on Prevention Of Tobacco or E-cigarettes Vaping?