Ivermectin is a prescription drug, and it is available as an oral tablet, topical cream, and lotion. This drug is absorbed from the gastrointestinal tract (oral) and is widely distributed in the body but does not enter the CNS (central nervous system). Instead, it enters the breast milk (less than 2%) and is excreted via feces and urine (less than 1%).

Ivermectin is an antiparasitic drug useful in treating round tapeworm infections, strongyloidiasis, and other parasitic infections. This drug has replaced Diethylcarbamazine for onchocerciasis. One dose of Ivermectin is given at 6 to 12 months intervals to produce a long-lasting reduction of Mycosis fungoides counts in the eye and skin without affecting the adult worm. Ivermectin is the only oral drug effective in scabies and pediculosis.

Ivermectin belongs to the class of drugs called anthelmintics and is an extremely potent semisynthetic derivative of the anti-nematodal groups obtained from Streptomyces avermitilis. It is an antiparasitic medication that helps to treat infections of certain parasites in the body and is highly effective against scabies and pediculosis as well.

What Is Ivermectin Used For?

How Does Ivermectin Work?

Ivermectin belongs to antiparasitic drugs, and these classes of drugs work similarly and are used to treat similar conditions. The oral tablet of Ivermectin works by binding to the parts of the parasite and starts to paralyze and kills the parasite. Also, this drug stops adult parasites from making larvae for a while and treats the infection.

It starts acting through a special type of glutamate-gated calcium channel, which is found only in invertebrates (nerve and muscle cells). This leads to an increase in the permeability of cell membranes to chloride ions with hyperpolarization of the nerve or muscle cell and, ultimately, leads to the death of the parasite. But these channels are not involved in the motor control of flukes and tapeworms.

Ivermectin is well absorbed orally and reaches its peak plasma concentrations after 4 hours of taking the drug. It is sequestered in the liver and fat and has a half-life of 18 hours after oral administration. This drug has a high protein binding capacity of about 93 %, and the CYP3A4 isoenzyme metabolizes it, but no drug interactions related to this isoenzyme are known.

Avoid taking this medicine after it expires. You can verify the expiry date printed on the back of the pack before taking medicine.

What Is the Dosage and Administration of Ivermectin?

Dosage and administration of Ivermectin depends on the following, 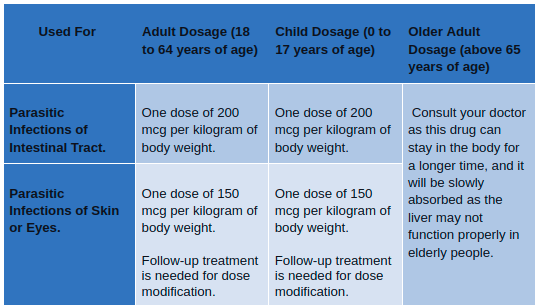 How to Use Ivermectin?

Ivermectin should be taken as instructed by the doctor, and in case you missed the dose, it can be taken as soon as you remember it. But if it is time for the next dose, you do not want to take the missed dose, and you can continue with your regular dosing schedule. Also, do not take a double dose in order to compensate for a missed one.

What Are the Side Effects of Ivermectin?

Some common side effects caused by Ivermectin are,

The following are rare side effects, but stop the drug and seek the doctor’s help if you come across any of the following,

Allergic reactions due to Ivermectin are rare but stop the drug and get emergency medical help if you come across the following symptoms of a serious allergic reaction.

What Are the Drug Interactions of Ivermectin?

What Are the Common Brand or Trade Names of Ivermectin?

The common brand names of Ivermectin are,

Can you suggest a treatment for body lice?

Query: Hello doctor, I am a 21 year old male. I got infested by body lice in my hostel. Now, it is getting worse. Please suggest some treatment to get rid of it.  Read Full »

Why did I see two white worms while cleaning my 7-month-old baby's umbilical cord?

I have been sick with parasites for past six months. What has to be done?

Query: Hi doctor, I have been sick with parasites for past six months and I would like to know if you are able to prescribe medication to get rid of them or to tell me what to tell my family doctor to prescribe me as I am having a hard time getting a appointment with infectious disease. I have been taking...  Read Full »

Do you have a question on Ivermectin or ?