Myo-Inositol - Uses, Risks, and Side Effects

Myo-Inositol is a sugar that acts as a second messenger and is found abundantly in the brain and other tissues. Read the article to know more about it.

Myo-inositol, or simply inositol, is a natural substance found in oranges, pears, peaches, beans, brown rice, nuts, seeds, and various other fiber-rich foods and citrus fruits. Inositol is also called vitamin B8, but it is not really a vitamin, but sugar that affects multiple hormones in the body that regulate your mood, cognition, and blood sugar levels. The antioxidant properties of this natural substance helps fight the detrimental effects of free radicals in the brain and other tissues of the body.

It is also available commercially as D-chiro-inositol, IP6, and inositol hexaphosphate supplements. These supplements are used to treat a vast number of medical conditions, including psychological diseases and metabolic disorders. The human body can also produce inositol from carbohydrates in the diet. Let us look at the sources, benefits, dosages, and side effects of Myo-inositol.

What Are the Best Sources of Myo-Inositol?

Even though Myo-inositol is synthesized in the body, we need to include foods and supplements that are rich in Inositol. The best sources of Inositol include

Fresh fruits and vegetables are better sources than canned ones.

Related Topics
I am suffering from PCOD. Can I get pregnant naturally?
How to get pregnant with PCOD?
I have irregular menses. How can they be treated?

Approximately 1 g of Inositol is present in a typical diet of people in the United States. Scientists have found 18 g of Inositol per day to have great therapeutic value, which is why it is being used to treat various psychological and physical illnesses.

How Does Myo-Inositol Work in the Body?

A few grams of Myo-Inositol are synthesized in the kidneys and testicles every day. Inositol is a vital component of cell membranes. It also affects the action of insulin, thus playing a crucial role in blood sugar control. Inositol also acts on the chemical messengers (serotonin and dopamine) and regulates our mood. Apart from this, it also plays a role in controlling the calcium concentration in cells, the breakdown of fats, and gene expression. 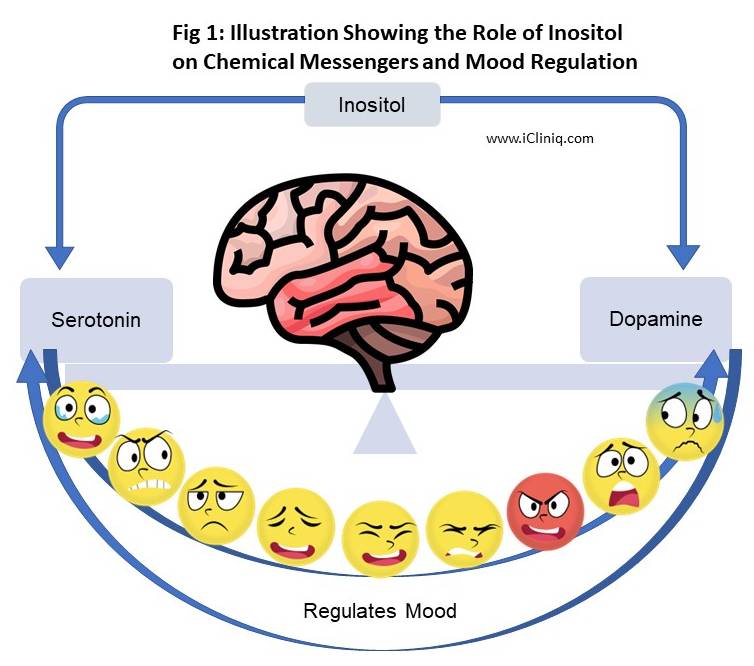 As mentioned above, Myo-Inositol helps balance serotonin, dopamine, and other vital neurotransmitters in the brain that affect your mood. A study also found that the levels of Inositol are lower in people with mental health problems such as anxiety, depression, bipolar disorders, and compulsive disorders. There is still a lack of evidence to support the benefits of Myo-inositol supplements on such patients. Still, it has the potential to replace traditional medicines, as it results in fewer side effects. Some studies have been conducted to check its effectiveness.

Apart from these conditions, Myo-inositol might also help treat obsessive-compulsive disorder (OCD), post-traumatic stress disorder (PTSD), and attention deficit-hyperactivity disorder (ADHD), as it affects the levels of serotonin and dopamine.

Polycystic ovary syndrome (PCOS) is a condition that results in irregular periods and infertility due to hormonal imbalances in women. The other complications of PCOS include weight gain, diabetes, and high blood cholesterol levels. When combined with Folic acid supplements, Inositol may improve PCOS symptoms. Taking Inositol and Folic acid might help reduce blood cholesterol and triglycerides levels, and slightly lower blood pressure in PCOS patients. Preliminary studies also found this combination (4 g of Inositol and 400 mcg of Folic acid daily for three months) to help females with fertility problems ovulate.

Insulin resistance is a common problem in women with PCOS, making them more susceptible to type 2 diabetes. Myo-inositol also acts like an insulin-sensitizing agent and regulates the body's cells to utilize glucose in the blood for energy with the help of insulin. This prevents the body from producing excessive insulin. It is as effective as Metformin, a standard antidiabetic drug.

A high blood glucose level during pregnancy is called gestational diabetes. As mentioned before, Inositol has been found to affect the function of insulin in the body. It has not been proven, and more studies need to be done, but a combination of Myo-inositol (4 g) and Folic acid (400 mcg) taken throughout pregnancy is believed to prevent gestational diabetes and control blood pressure.

How Does Myo-Inositol Reduce the Risk of Metabolic Syndrome? 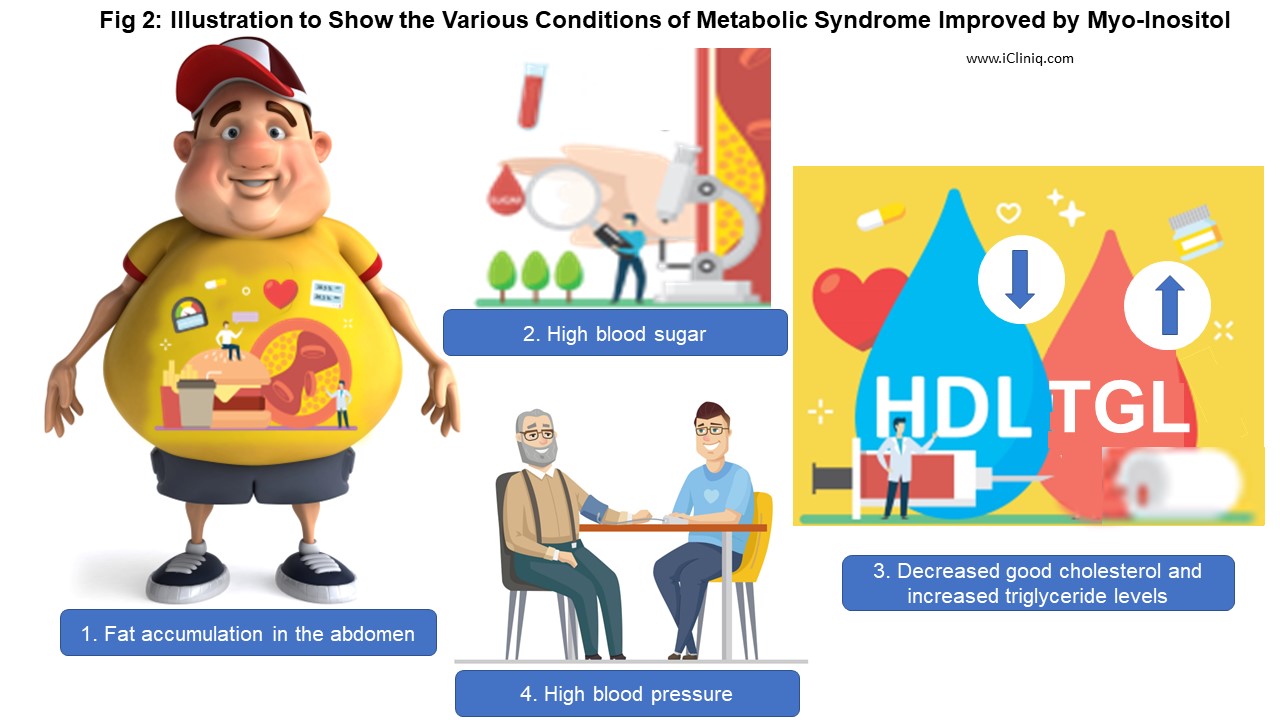 The conditions associated with metabolic syndrome increase the risk of heart attack, stroke, and diabetes. The conditions include:

Lithium is commonly prescribed for patients suffering from manic depression and other psychological conditions. But, Lithium is known to aggravate psoriasis in patients, a skin condition that makes the skin scaly and white patches appear on the skin. Inositol might help reduce psoriasis symptoms in such patients.

Respiratory distress syndrome results in breathing problems in preterm infants due to under-developed lungs. Inositol is believed to relieve breathing difficulties in such infants.

A study showed the combination of Inositol and Folic acid helps control blood glucose levels in people with type 2 diabetes. 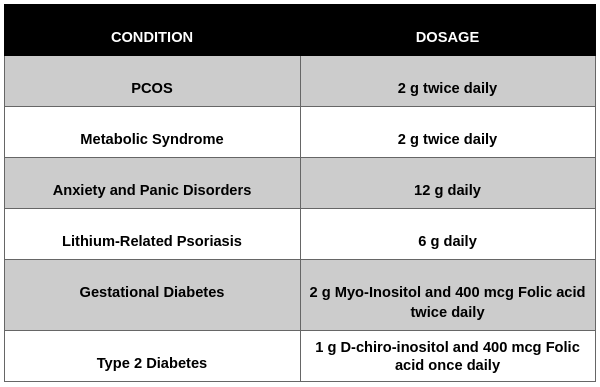 What Are the Possible Side Effects of Myo-Inositol Supplements?

Myo-Inositol supplements are well-tolerated and do not result in serious side effects in most. But with a 12 g dosage, mild side effects, such as nausea, bloating, sleep difficulties, dizziness, headache, and tiredness might occur.

Some studies suggest that Myo-inositol might cause a manic episode when used for bipolar disorder. Scientists are also concerned that Inositol hexaphosphate might affect the absorption of zinc, iron, calcium, and other minerals, resulting in nutritional deficiency.

More studies are needed to determine the side effects in pregnant and breastfeeding women. Information on the effects of this supplement taken for a long period is not available, as most studies conducted so far were a year or less long. Never self-medicate, and always consult a doctor before taking any supplements.

As not enough studies have been conducted, Myo-inositol cannot be considered a practical or standalone treatment for any condition. To know more, consult a doctor online now.

Is there any other option for PCOS other than laporotomy to get conceive?

Query: Hello doctor, I am 23 years old. I am married for one and a half years, with regular cycles and primary infertility. History of laparotomy for pseudo tumor intestine before 15 years. I had PCOS. We have been trying to conceive for the past eight months. My scan report shows: Right ovary: 6x6 cm w...  Read Full »

My periods are irregular and not conceiving. Please help.

Query: Hi doctor, I have had a history of irregular periods and now I am failing to get pregnant. To highlight about my past, I started having my periods from the age of 14 and had irregular periods always. Sometimes, I had heavy flow for 7 to 8 days and sometimes it was scanty for only 2 days. I was put ...  Read Full »

Suffering from PCOD and taking medicines, but still it has not reduced. Can you help ?

Query: Dear Doctor, I am a 29 year old female suffering from PCOD, taking medicines from past 1 year. But still it has not reduced. I was into Metformin and Folic acid. At the same time I have also taken medicines for conception (i.e, clomiphene). Follicar study has been conducted for four times and only ...  Read Full »

Do you have a question on Myo or D-chiro Inositol Side Effects?