Recently, the news is being hit by a new term Monkey fever and it is essential to be aware of this disease so as to protect yourself from it. 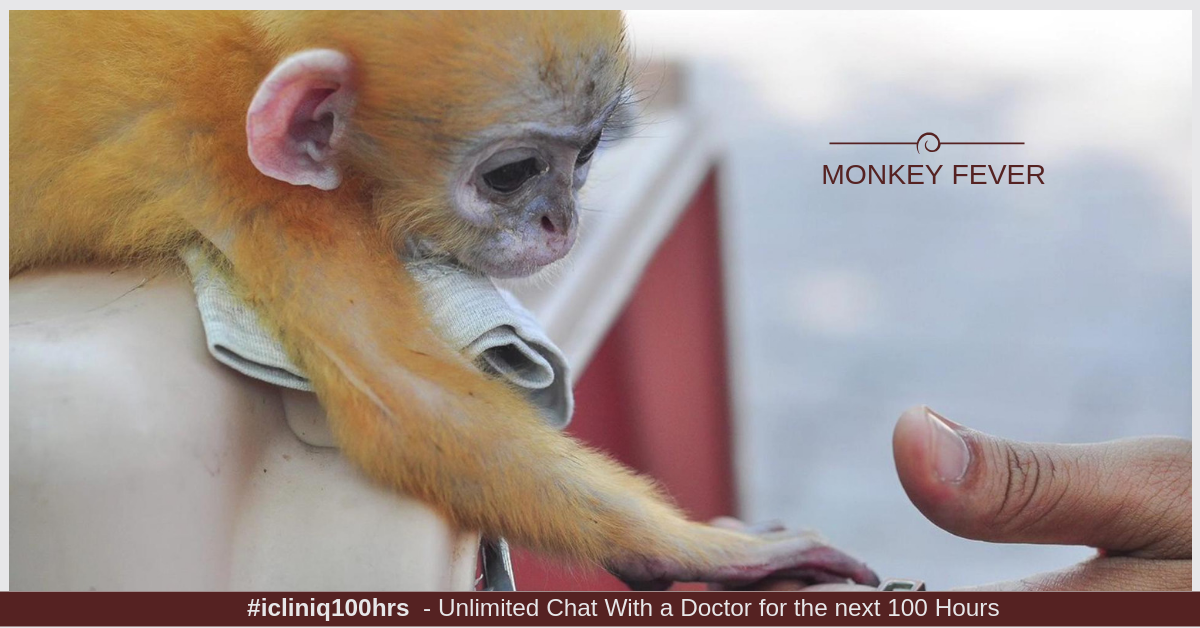 Recently, the news is being hit by a new term Monkey fever and it is essential to be aware of this disease so as to protect yourself from it.

Monkey fever, scientifically known as Kyasanur forest disease is a viral fever which is caused by a virus belonging to family Flaviviridae and is carried by ticks, birds, etc., hence categorized as a vector-borne disease. It mainly affects monkeys and human beings.

It was first noted in Kyasanur forest in Karnataka, India in March 1957 where lots of monkeys died because of this hence, commonly known as Monkey fever or disease. Infection to the human was later reported in Bandipur while handling infected dead monkeys.

Initially it represents as chills, fever with headaches in the frontal region after incubation period of 3 to 8 days, followed by bleeding like from nose, throat, gingiva (gums), even stomach (gastrointestinal bleeding) after 3 to 4 days of onset of initial symptoms, along with abnormally low blood pressure, decreased platelets, RBC, WBC.

It can be associated with the following other symptoms, especially neurological symptoms at the beginning of the third week in some patients with fever, like:

Related Topics
Does nose bleeding occur after a septoplasty?
Fever and chills in a child of age 3 years 6 months. What can be done?
Is headache a side-effect of Nevanac ophthalmic suspension?

Being a viral fever, it gets cured on its own within 1 to 2 weeks without any complication in some patients, but the recovery period is prolonged and can extend to several months. The affected person may feel weak accompanied by muscle pain that might hinder day-to-day activities.

It is transmitted through the vector Haemaphysalis spinigera which is a forest tick and variety of animals play the role as reservoir like rats, squirrels, etc. Humans get the infection from the bite of nymphs (immature form) of the ticks.

The recent more efficient methods include:

The early stage assessment can be done using PCR (molecular detection) or isolation of virus from the blood. Later ELISA (serologic testing) can be performed.

There is no specific treatment for this but early hospitalization along with fluid level management, management or precautions for bleeding disorders, complete rest and diet rich in protein may help. Some home remedies believed to be beneficial include garlic, ginger, turmeric, green tea, and mushrooms by boosting the immunity.

The prevention includes vaccination, along with wearing protective clothing, ticks control, and the use of insect repellants.

If you notice any of the symptoms mentioned or are in doubt, consult your doctor as soon as possible as if not managed soon, this can be fatal too. Online medical platforms make it more easy for you to contact a doctor online and get guided regarding the condition.

Article Overview: Fever is a non-specific symptom. When babies have fever, it can be traumatic for the parents as well, because they are unsure of what is causing it and how to soothe the baby. Adding to their anxiety, the baby is unable to explain his/ her discomfort in words. This article deals with how to take care of a baby who is down with fever and when to seek medical help. Read Article

Fever is not an illness by itself, but a symptom. It can be due to virus or bacteria. Viral fevers that come with the common flu or cold tend to subside within three days. They do not require antibiotics as these medicines have no effect on the virus. On the other hand, bacterial fevers like urinary...  Read Article

Does the blood pressure medication could cause headaches?

Query: Hi doctor, I am a 50 year old female. I have aches in my limbs and thighs especially at night. It is often characterized by heaviness in limbs. I am getting headache chiefly in left side of the head. I am taking painkiller at least once in a week for the same. I am taking Newtel 40 mg for blood pres...  Read Full »

Is frequent nose bleeding without any reason normal?

Query: Hello doctor, I would like to ask if the nose bleeding is normal? I mean the father's family are like this. They just get the nosebleeding out of the blue and so the child too, just a while ago. I am really worried about my nephew. Is this normal? Or something serious is going on? Please help me.  Read Full »

Do you have a question on Low Blood Pressure or Monkey Bite?