COVID XE Variant - Should We Worry About It?

A newer form of COVID said to be a mix of two omicron variants is the XE variant. This article provides you with an insight into this new variant. 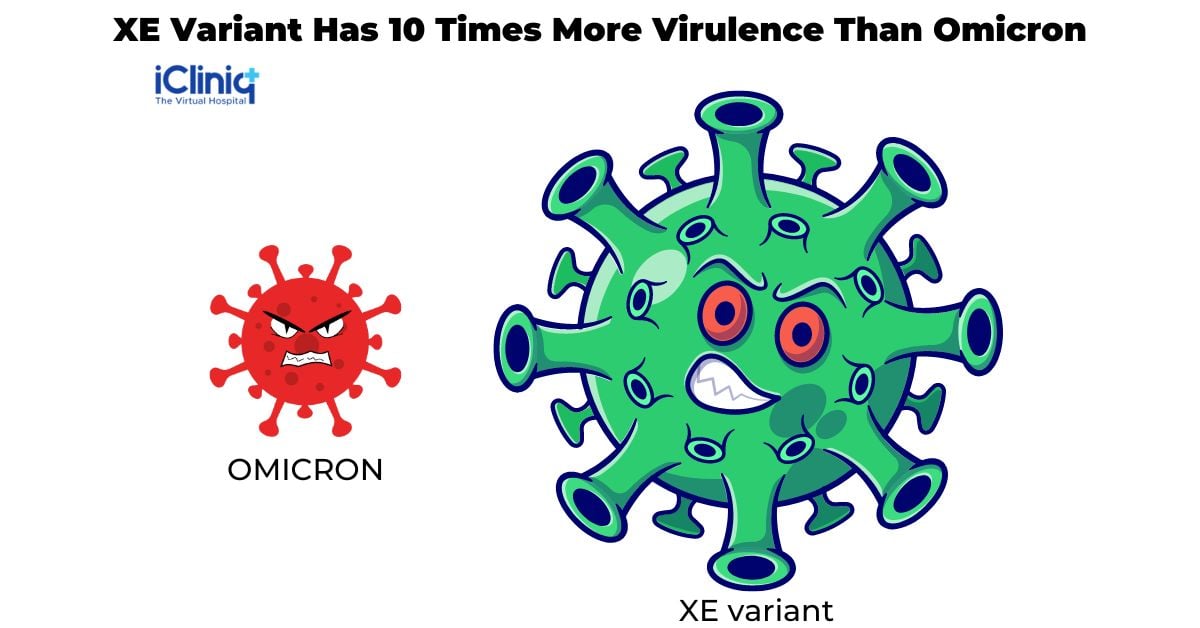 COVID has made us aware of medical terms better than ever before; After battling three long waves of COVID, everybody is a pro at understanding what a variant outbreak means. Adding on to the list of the multiple variants passed on from the mother virus is a variant called - the XE variant; its outbreak is heading towards a peak, says reports. Though anything put out about this new variant does not follow a bunch of research, it is predicted to be the rapid spreading variant in the whole bunch. Have a look at what this variant has revealed so far.

What Is an XE Variant?

Omicron, the second last variant that has hit the crowd as of now, is said to have two sublineages called BA.1 and BA. 2. The newly formed XE variant is doubted to be the mix of these sublineages. It is also said to be a recombinant virus that develops when two viruses break and combine together to form a new virus. Though it might be too soon to come to a conclusion, researchers suspect it could be ten times more virulent than the omicron variant.

When and Where Was the First XE Variant Outbreak?

The UK announced this variant for the first time at the end of March 2022. As of now, the country suffers only less than one percent of cases with the new variant in its total COVID cases. Recently, India announced its first case reported in the city of Mumbai; which has been now announced as misdiagnosis and is actually an omicron variant of the virus. Following this, the new variant has hit the city of Gujarat, reporting its first XE case. Besides these countries, reports say that the XE variant has set its pace in Thailand and New Zealand.

Why the Name XE?

This virus being a recombinant type, has gotten the alphabet X in its name, as scientists name recombinant viruses by giving them X as the first letter. The second letter E, attributes to the order of its discovery among the other variants. It is also said that the previous variants in the order have departed without causing notable effects.

What Are the Symptoms of the XE Variant?

Though new symptoms keep popping up with the spread of the virus. Few symptoms that have occurred in the majority include,

Although it might be early to set a framework for the symptoms of the current variant, these are the symptoms an exposed patient would have initially. The variant is being studied and has not revealed an exclusive symptom of its own yet.

During the third wave, the effects of the virus and the spread were found to be lesser than the previous ones, attributed to the increase in vaccination rates. Hopefully, the effects of vaccines work well with this variant as well. Researchers also say that the treatment plan keeps getting modified with each variant outbreak, and some also have registered high hopes for the COVID vaccine’s effect against the XE variant.

What Can Be Done to Prevent XE Variant’s Spread?

There is nothing new that needs to be addressed regarding COVID prevention; still, the following are a few things that need a reminder about with this new variant outbreak;

With many countries lifting their COVID protection protocols, this new variant outbreak has created a sense of doubt about returning back to normal. Though there are strains coming back and forth, there is a fallback in the virulence of the virus post-vaccination. Preventing this virus is not just the higher authorities’ responsibility; every individual plays a role in eradicating and controlling this new variant. Following all that is instructed, keeping in mind we are not completely COVID-free yet, paves a long way in fighting this variant.

Do you have a question on Xe Variant or ?