Bohn's nodules are often referred to as the gingival or alveolar cysts of the newborn child or infant. Read the article to know more. 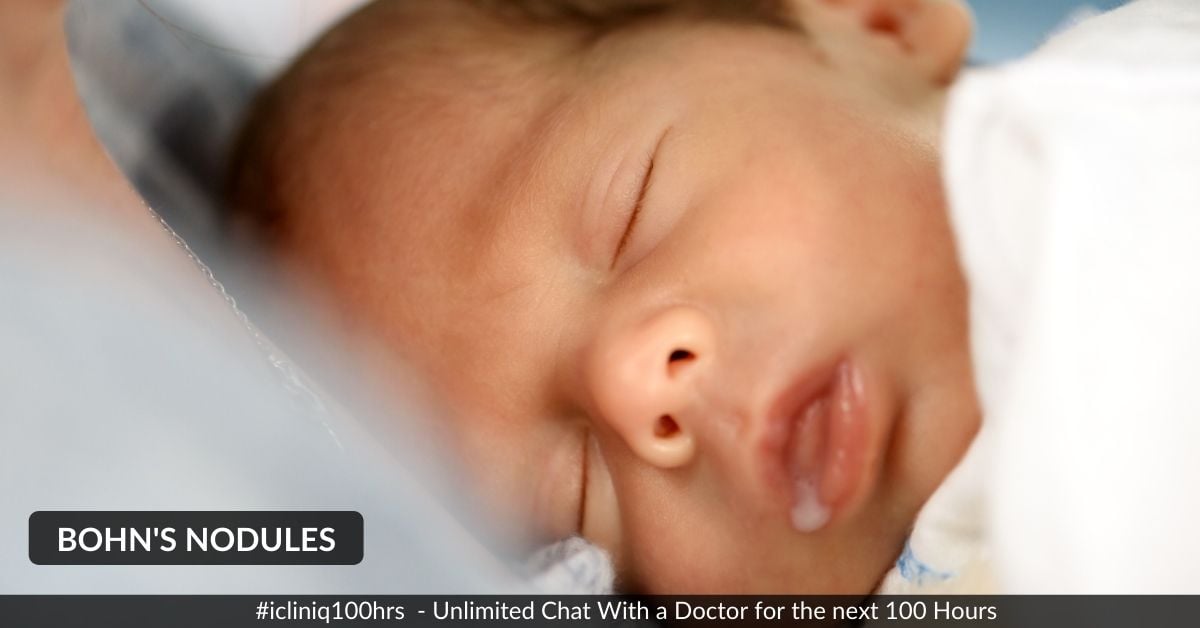 What Are Bohn's Nodules?

Lesions that are keratin-filled cysts in the newborn's mouth are called Bohn's nodules. These nodules are commonly found in the infant's mouth over the palate or the buccal or lingual surfaces of the alveolar ridges or occasionally along the hard and soft palate junction. They are derivatives of palatal salivary glands and are numerous and scattered along with these locations in the child's oral cavity. The appearance of these developmental cysts can cause anxiety and concern to anxious parents.

They can be simply explained as mucous gland cysts that do not exceed 3 mm in size (typically always less than 3 mm) and have a firm, nodular consistency with a grayish-white appearance. The occurrence of these cystic lesions varies between 0 to 36-month-old infants, with a 20.8% prevalence in this age group.

What Are Epstein Pearls and Gingival Cysts?

Related Topics
While breastfeeding, can I get my damaged tooth out?
Conception, Pregnancy, Breastfeeding, and COVID-19
Shall I use Surfaz-SN to remove the acne on my penis?

Heinrich Bohn, a German physician, described the appearance and occurrence of the newborn inclusion cyst and hence the name Bohn's nodules. However, as per a larger classification according to Alfred Fromm, who classified gingival cysts based on origin (1967) – the three main types of gingival cysts that occur in the newborn are:

Similarly, in adults, the gingival cysts are odontogenic developmental cysts just like Bohn's nodules and Epstein pearls (but are not found in infants, they are seen only in adults). These gingival cysts are derived from the cell rests of the dental lamina and found on the buccal and labial surfaces of the gingiva. Also, they develop quite late in adulthood, almost around the sixth decade, and are a comparatively rare condition in adults given the frequent incidence of dental-originated cysts.

What Is the Pathogenesis of Bohn's Nodules?

In the first trimester of pregnancy, that is, after the initial eight weeks of intrauterine fetal life, the palate starts to develop by the fusion of the lateral palatine processes that are in turn generated by the maxillary processes. These lateral palatine processes are in the lateral aspect of the oral cavity and grow in a downward direction towards the midline. From 8 weeks to 12 weeks of intrauterine fetal growth, the palate is usually completely formed by fusing these palatine processes with the nasal septum and premaxillary processes. Hence the entrapment of mucous membranes manifests as tiny superficial yet firm bumps in the palate.

The formation of Bohn's nodules and Epstein pearls is attributed to the theory that epithelium gets trapped during the palate formation, forming cystic content during development. Alternatively, other theories suggest the palate formation is alongside the epithelial remnants from the minor salivary glands of the palate that may result in these inclusion cysts to form simultaneously with the palatal development in the newborn infant.

What Are the Differential Diagnosis of Bohn's Nodules?

Parents are often anxious to notice these gray to whitish nodules in their infant's mouth and consult a pediatrician who may usually diagnose these cystic lesions as neonatal teeth or an oro-fungal infection like candidiasis. Parents present the chief complaint of anxiety to the physician or pediatrician as they fear injury to the baby's oral tissues while feeding, or they fear that the swallowing moment is improper or affected in their infant.

A consultation with the dental surgeon helps the parents rule out other lesions that resemble Bohn's nodules. After visual examination, the dentist will consider the following conditions for a differential diagnosis:

How Are Bohn's Nodules Managed?

A dental surgeon will reassure the parents that this condition is harmless and self-healing. The lesions disappear on their own, usually within three months of age of the infant by the rupture of the cystic keratin contents into the oral cavity. However, the surgeon can only approach this conclusion after differential diagnosis by visual or clinical examination of the infant. Almost all the Bohn's nodules do not present with swelling or pain and should be considered for excision only when they do not disappear rarely or tend to enlarge (that can interfere with the mother's feeding).

Hence to conclude, Bohn's nodules are like any other oral lesions in neonates that are harmless and benign. Consulting the dental surgeon and watchfulness of the lesion, whether it enlarges or spontaneously ruptures and disappears over time, is the only preventive modality for these inclusion cysts in the newborn.

Article Overview: Microvascular ischemic diseases are a group of diseases that affect the small blood vessels in the body. This article discuses its types, symptoms, causes, diagnosis, and treatment. Read Article

Do you have a question on Breast Feeding or Ranula?