Answered by
Dr. Uphar Gupta
and medically reviewed by iCliniq medical review team.
This is a premium question & answer published on Nov 11, 2017 and last reviewed on: Oct 09, 2018 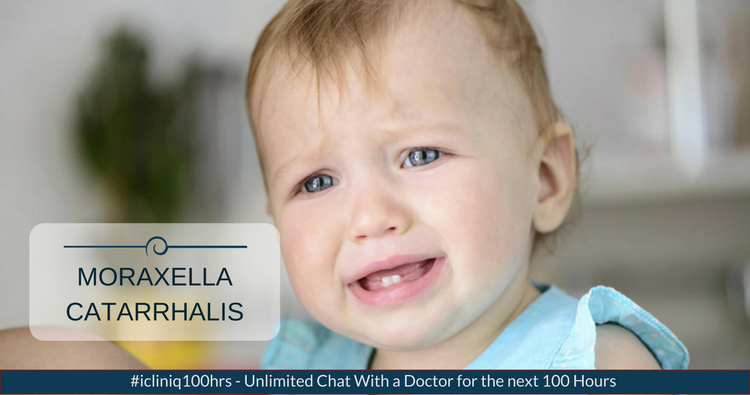 My daughter is 2 years old. Eight months before, she had ear discharge. It was diagnosed as acute otitis media and she was treated with antibiotics such as Lindacin, etc. A week after the completion of antibiotics, again she had the same problem for about three months. Then, the ENT specialist decided to clean the mastoid. Since then, she has been getting fever once in every month. It has been six months now and the 6th time she is taking antibiotics. The blood results are always showing that there is a bacteria, but never detected the location. The fever goes up to 40 and 40.1 degree Celsius. In addition, Paracetamol does not lower the fever and Ibuprofen keeps her only three hours. So, I normally do the rotation with Voltaren. We recently got a strep test for mouth, ear and nose. The nose strep had a bacteria called Moraxella catarrhalis. Would this bacteria cause such a problem? Would the CRP be so high due to this? How is it possible that such bacteria was not cured taking so many antibiotics for such a long time? Can you please advise me what should I do further? I am really worried.

Co-trimoxazole and Tetracyclines are the drugs of choice in Moraxella catarrhalis as the rate of resistance to these agents is currently less.

Is the fever caused by Moraxella catarrhalis? What should I do for this?

Related Questions:
Please suggest medicines for parameters out of range in the blood test.


.. been on Tetracycline for quite a long time. There are other options also like you said oral Isotretinoin, which gives very good result in patients with acne. But if the patient is on this medication, then it is advised to avoid pregnancy. At least...   Read full

I have microscopic hematuria.Is this curable?


Hello doctor, I am a 45-year-old male. My BMI is 29. I have been diagnosed with an incomplete right bundle branch block QRS duration of 97 milliseconds. I do not have high blood pressure, and I exercise daily. My doctor said no further action was ne...   Read full