Q. Can wearing of tight pants cause pain in the testicle?

Answered by
Dr. Devendra
and medically reviewed by Dr.Nithila A
This is a premium question & answer published on Sep 16, 2020 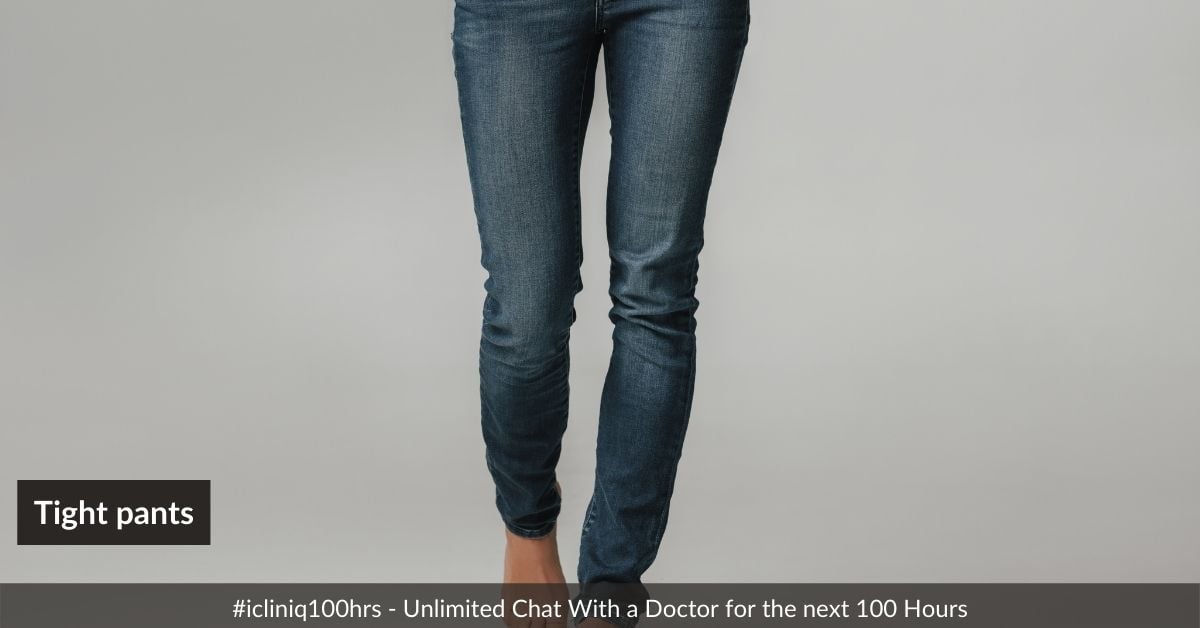 I am 20 years old. Two to three months ago, I started to have pain on my left testicle whenever I go out as I am usually at home. I speculate that I have varicocele as upon doing a self-examination, I found that the veins were bigger than the other testicle. There were no lumps found, but the left testicle feels bigger than the right one.

I would say it is around 5 mm bigger in diameter. I do not have urinary problems like burning sensation. Although when it pains, my left lower abdomen and the pelvic area also hurt sometimes which could be due to lack of exercise as I am on my computer most of the time.

The pain or ache on my left testicle usually appears when I am wearing tight pants. But I did not have this problem three months ago. I consulted a general practitioner, and he did a physical check and said it was likely due to congestion of the blood at the testicle. Do you think it could be an infection like epididymitis? I only had sex once in my life with my partner, but I do not have any other symptoms of STD. And do you think that there is something serious? Or is it probably due to congestion or tight pants?

Testicular pain with no obvious pathology on physical examination is common in young boys. As the testes descend through the lower abdominal wall, they carry spiral muscle which keeps them suspended in a dynamic position. Contraction of these muscles gives rise to pain. Tight pants press on the inguinal canal and may hinder venous return causing congestion.

Wearing Langot (cotton strip worn by wrestlers to support testicles in India) will prevent their hanging, so there will be no muscle contraction. Get a USG scrotum (ultrasound). Wear scrotal support (langot). Kindly consult your doctor to discuss the suggestion and take the treatment with concern.

Tablet Pregabalin 75 mg with Mecobalamin (Methylcobalamin) at bedtime for 10 days.

When I said tight pants, I did not mean the waist. But the bottom of the pants where the scrotum rests on. In most of my pants the bottom of the crotch area seems to be very close to my scrotum and I was wondering if it could be causing the pain? When I touch my left testicle bottom, I can feel the epididymis with a bit of force, and a little painful too. Could it be due to the pants or possibly an infection which made the epididymis more sensitive?

The normal testicular sensation is also felt as painful on deep palpation. Tight pants from bottom cause generalized uneasiness but not localized testicular problems. Scrotal USG will suggest if there is any infection or inflammation. Till then follow the above advice of scrotal support and medications.

I have followed your advice of scrotal support as well as getting some Pregabalin. I want to ask another question too. I noticed that my left testicle also becomes bigger, and then sometimes, it is normal in size similar to my right testicle (but still bigger by a bit). Is this normal?

Especially if it is due to congestion or something, and how much bigger in diameter should a testicle be? I have seen that it should be around half a teaspoon bigger, but I do not understand that measurement. I will also be going for a scrotal USG if the pain pops up again.

The difference in testicular volume is usually slight (indiscernible) if not pathology on one side. Up to 10 % difference in size may be considered incidental. Factors decreasing unilateral testicular volume are varicocele, previous mumps orchitis, and undescended testes, etc. But the volume difference is static. Variability is most likely due to different positions like oval shape with flat sides which make us feel in different position giving different size impression. If USG scrotum is normal, then slightly large testes on one side is not a cause of concern.

I have seen another doctor, and he also said that it was likely due to congestion and he said that it was very unlikely due to any infection. He said that it might be the beginning of having some varicocele too and gave me Daflon. And as I was running just now with loose pants, the pain came back again, and I changed the underwear that was not too tight nor loose. During that period when it was painful, I touched the left testicle and found it painful even to touch it. So do you think that my final diagnosis is just congestion or varicocele?

The final diagnosis is idiopathic orchialgia. Varicocele (mild) usually does not give rise to so much pain. Labeling it as due to varicocele may incline you to get it operated. But varicocele surgery for pain in mild varicocele may not relieve pain. One thing is clear after ultrasound and examination (attachment removed to protect patient identity) that it is not malignancy or anything of major concern to health. But to avoid the effect of pain on lifestyle, try wearing scrotal support during the day. Practice Bahya Pranayam (moolbandh) daily.

|
Related Questions:
What is the permanent solution for testicular pain?


The testes carry a spiral muscle called cremaster with them while coming out of the abdomen to lie in the scrotum at the birth of a male child ...   Read full

What is the reason for testicular pain and burning sensation in the leg?


.. can happen due to any cause like a simple infection of virus or bacteria. So you do not have to worry about it. The burning sensation of the leg could be due to some allergy or something. Your problems are in mind and not the body. You are anxious...   Read full


If pain does not get relief, then get an ultrasound scrotum done ... Hello doctor, About a week ago, I started feeling some dull ache in my right testicle and the scro...   Read full

I took antibiotics for testicle pain. It has recurred after I finished the course. Please guide me.

Query: Hello doctor, I am a 54 year old man, 5 feet and 8 inches, weighing 146 pounds. About six weeks ago, I started having intermittent pains and discomfort in my right testicle. Sometimes it was a dull ache, sometimes a sharper, stabbing pain. It seemed to radiate from a spermatocele cyst, which I have ...  Read Full »

Why does my testicle hurt after sex?

Query: Hello doctor, I am a 28 year old male. I had unprotected sex last week. It was a three-hour long session and I was a little sore afterward but felt totally fine the next few days. Then, three days ago, I noticed a slight pain in my balls and the discomfort has continued until today. It is most pain...  Read Full »

Can I continue Banocide for a swelling on the testicle?

Query: Hi doctor, About a month ago, I suddenly noticed a grape size swelling on the top of my right testicle. It is not attached to the testis, but above it towards the top of the scrotal sack. I went to a urologist and he asked me to do an USG. The USG showed a thickened right spermatic cord with cystic ...  Read Full »

Sinusitis - Causes, Symptoms and Treatment
Sinusitis is the infection of the air cavities within the nasal passages. Normally, the healthy sinuses are filled with ...  Read more»Asthma and Its Rising Incidence
This article explains about asthma and its causes. It also focuses on the benefits of starting early treatment to lead a...  Read more»Parkinson's Disease: Historical Aspects and Current Treatment Approaches
This article discusses the historical aspects of Parkinsonism and, the evidence based approaches currently available for...  Read more»