What Exactly Should Be Done When You Feel the Urge to Blow Your Nose??

Every one of us blows our nose. But does it really serve the intended purpose? Here, we discuss how blowing one's nose can be harmful when already suffering from sinusitis. 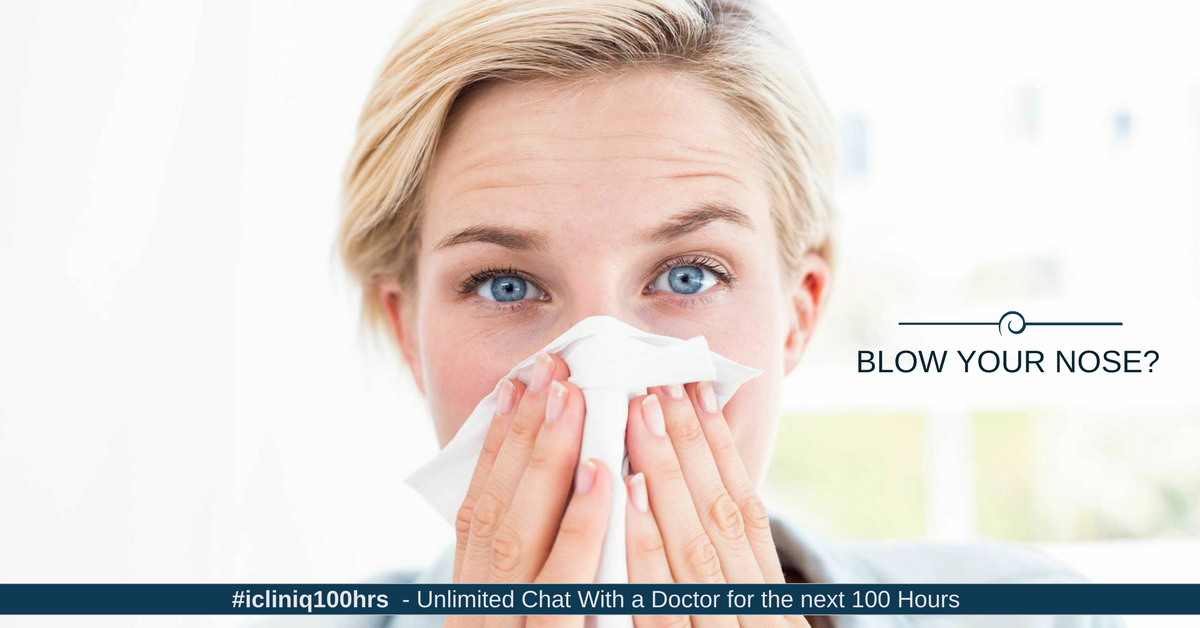 Contrary to normal beliefs, blowing one's nose is not helpful at all times. Of course it does help remove some secretions and alleviate nasal stuffiness, but when done during sinusitis and rhinitis it causes more harm than help. Let us see how is this true.

Entire nasal cavity is lined by cells (the mucosa) which are covered on top by mucus fluid (nasal secretions). These cells have cilia (long projections) which beat in a single direction and propel the secretions towards the nasopharynx (back of nose). From the nasopharynx, the secretions fall backwards and downwards into the throat.

Related Topics
Can sinusitis, dry nose and shivering during winters be prevented?
Why am I having serious sleep paralysis with shortness of breath?
I have sinusitis and feel like something is stuck in my neck. What can be done?

Paranasal sinuses are air filled cavities in the surrounding bones that open into the nasal cavity. These sinuses open via ostia, which are small holes (small in relation to the size of sinuses). These sinuses are also lined by mucosa and covered by mucus. Here, the mucus flows from inside the sinus to outside (nasal cavity) through the particular ostium. The sinuses are ventilated through the same ostia when you exhale air (during breathing out).

So, what exactly should be done during rhinitis or sinusitis when you feel the urge to blow your nose ?? Try HAWKING. Hawking is clearing the throat by forcing up the phlegm. If it is too congested, put few drops of decongestant nasal spray and rest for 10 minutes. Thereafter do steam inhalation and hawk and spit out the secretions which come to throat. But remember not to hawk very frequently, that those near you might wonder if something is wrong with you :)

Consult an ENT otolaryngologist online for queries regarding sinusitis --> https://www.icliniq.com/ask-a-doctor-online/ENT-Otolaryngologist

Why does my 7-year-old have breathing difficulty, cough and throat pain?

Query: Hi doctor, My 7 year old daughter has difficulty in breathing. Sometimes, she also makes noise while breathing. She has frequent cough and pain in the throat. The doctor advised a few medications. There was a little relief after two days. After exemption of medicine, the breathing difficulty, cough...  Read Full »

My 3.3 year old son has allergic rhinitis. Can I use Budecord inhaler?

Query: Hello doctor, My son is 3.3 years old. Last year, he had three episodes of allergic rhinitis and one episode of allergic conjunctivitis. This year, our pediatrician asked us to get an allergy test done, and he put my son on Momeflo, Nukast 4, and Levolin inhaler. We found out that he is allergic to...  Read Full »

Can herbal capsules be given with allopathic medicine for child with allergic rhinitis?

Query: Hello doctor, My daughter aged 9 years has been suffering from allergic rhinitis for the last few years. During the winter season, cold and cough are very common for her. In the summer, she suffers from coughing and itching in the body. The problem is hereditary as my whole family members like my m...  Read Full »

Do you have a question on Steam Inhalation or Sinusitis?