iCliniq / Health Articles / Rashes Under The Breast / Why Do I Have Rashes under the Breast?
Women's Health Data Verified

Why Do I Have Rashes under the Breast?

A rash developing on the chest or under the breast may result from an allergic reaction or skin irritation. To know more in detail about rashes under the breasts, read the below article.

Contents
Introduction
What Causes Rashes Under the Breast?
When Does the Rash Become a Concern and Require Medical Attention?
Conclusion 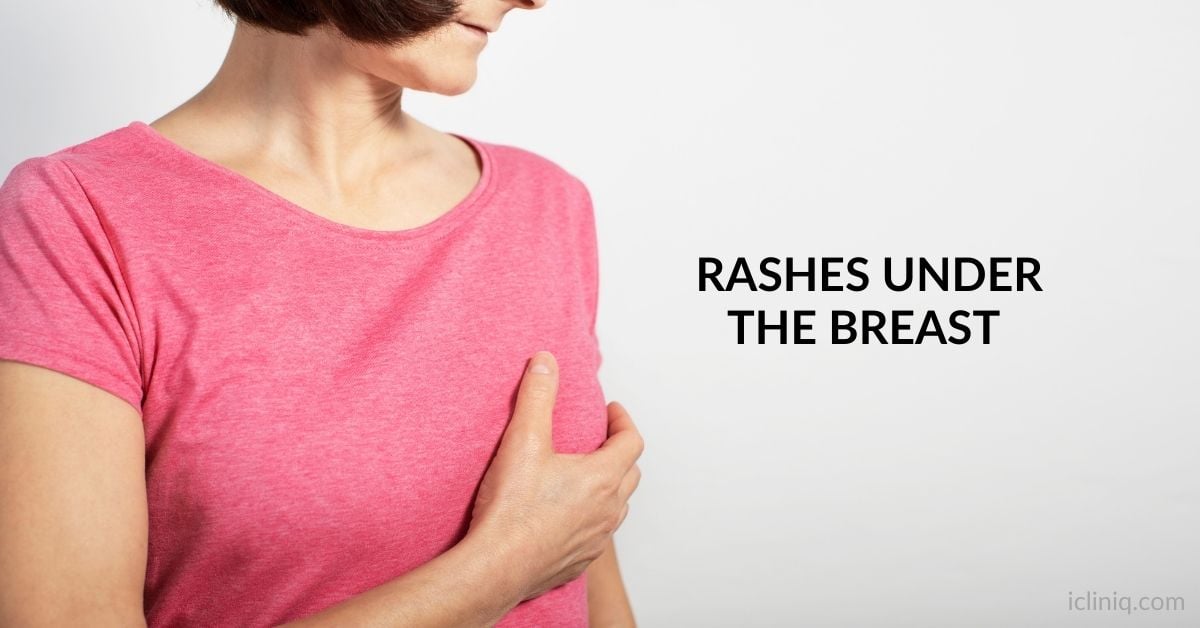 Rashes are red, swollen, and irritated skin that appear due to various factors. Most of the rashes are painful and can also lead to blisters or raw patches on the skin. These rashes might be due to food allergy or irritants such as chemicals used in detergents and soaps, or in some cases, they might also be due to other underlying medical conditions. One such common condition where rashes develop on the folds of the skin is called intertrigo. These rashes develop in places where there is more moisture, heat, and reduced air circulation, such as under the breasts, groin areas, neck creases, etc.

What Causes Rashes Under the Breast?

Rashes, in general, may be due to allergies and infections, and most of these rashes affect almost all skin areas. But there are certain rashes that appear only near the breasts, and they might be due to reasons that range from normal responses against allergens to serious medical disorders. These causes are broadly classified into 5 categories:

Related Topics
I have pain in left breast with fat necrosis and lymphadenitis. Is this a matter of concern?
My wife is having thick red rashes on her face for the past three months. Please suggest a solution..
Why did the doctor advise to stop breast milk and start Isomil formula for my baby?

These hives can also occur below the breasts and cause itchy bumps with slight red or no discoloration. These allergies are treated with antihistamines which block the chemical in our skin that is responsible for causing hives. Topical lotions such as Cortisone cream or Calamine lotion might also be used along with cold compresses. If the hives reoccur constantly, it is wise to seek out an allergist to determine the substance that causes the allergy. This will help us to be aware and could avoid this type of allergy in the future.

The skin area under the breast is usually moist from sweat and warmth, which makes it an ideal site for all bacterial, yeast, and fungal infections. Some of the common infections that cause rashes under the breasts are,

Candidiasis - This is an infection that is caused by the same fungi that are responsible for causing oral thrush infection, vaginal yeast infection, and diaper rash. The fungus that is responsible for candidiasis is called candida and thrives in an environment that is moist and warm, such as under the breast. This causes a rash that leads to severe blisters and cracks, which are very itchy. The most common treatment method is the application of antifungal creams, but in case of widespread infections, the doctor might prescribe antifungal medications that are taken orally.

Ringworm - Ringworms are also caused by one of the several types of fungal infections called tinea. The fungus that feeds on dead keratin is responsible for causing ringworms, athlete’s foot, jock itch, and other skin-related conditions. They are characterized by small round red-colored patches with a highly distinctive ring. It can very easily spread from one person to another as it is highly contagious, and the most common tool that helps spread ringworms is shared towels and bedsheets. Ringworms are also treated with the help of antifungal creams.

Eczema - Itchy patch of inflamed skin which starts from a red or pink lesion and grows into dark purple or brown skin are the typical signs of eczema. Eczema has also been shown to develop small bumps that are filled with fluids which eventually oozes out. This causes the skin to be prone to irritation and itching. Though eczema can appear anywhere on the body, it is most common in the skin folds such as behind the elbows, under the breasts, etc. As mentioned earlier, eczema has no cure, but it is possible to manage it by keeping the skin properly by moisturizing and using gels or creams that contain Cortisone to control the itching.

Inverse Psoriasis - A less common form of psoriasis, called inverse psoriasis, is a chronic immune system disease. It is characterized by smooth but discolored patches of skin, especially on the folds of the body. It is common in the groin, underarm, and under the breast areas. It does not have the plague caused by flaky skin that is common in other forms of psoriasis. As the first level of treatment, steroid creams and gels are used for inverse psoriasis, but in cases of severe conditions, skin medications that suppress the immune system are recommended by the doctors.

A rare form of rapidly spreading cancer known as inflammatory breast cancer has symptoms that involve skin discoloration, and it is important to be aware of the symptoms associated with it. Common symptoms include,

As mentioned earlier, these breast cancers are rare, but it is always important to reach out to your doctor if you find any of these symptoms. In rare cases of cancer, a combination of chemotherapy, surgery, and radiation therapy is given, and it is the standard course of action recommended by doctors.

Heat rashes occur when the sweat glands become blocked, and the sweat does not get out of the pores. As a result, the sweat gets accumulated under the skin and causes inflammation and rash. These heat rashes can also cause rashes under the breasts. Heat rashes do not require any treatment as it usually goes away on their own. Hence the best treatment is to cool off and avoid excessive sweat and avoid visiting places that are hot and humid.

When Does the Rash Become a Concern and Require Medical Attention?

The exact cause and the severity of the rash that is under the breast may differ over a long range of scales. Hence if you find the below-mentioned symptoms along with the rashes, it is necessary to consult a doctor.

Rashes under the breasts can be prevented in most cases by following proper personal hygiene. This helps in reducing the chances of fungal infections and keeps the skin dry. Avoid sharing towels and sheets to avoid transmission of fungal infections. Also, by avoiding the known irritants and allergens, allergy-induced rashes can be avoided. In the case of auto-immune disease and cancer-related rashes, it is necessary to consult a doctor and treat the underlying condition.

Had odd reaction with breast implants. What is your suggestion for new one?

Query: Hi doctor, I got my breast implants (saline) removed two years ago. I had them for several years. Suddenly, I started having odd symptoms such as Raynaud's, poor circulation and heat and redness in my hands and feet when hot. Since then I have changed my diet, started supplements, started low dose...  Read Full »

I have weird line shaped rashes when I scratch. What is causing this?

Query: Hi doctor, Since last week, I have been feeling itchiness around my body, especially arms, feet, abdomen, and back. At first, it started every night, but it starts to feel itchy in the afternoon too. Now, the itch kind of calmed down, but every time I scratched, my skin tends to form weird raised l...  Read Full »

What can cause body rashes in a baby after fever?

Query: Hello doctor, My 2 years old child got a low grade fever two days ago and I gave him Calpol Paracetamol but 250 mg/5 ml. I gave him 4 ml and he just took the medication twice and then the fever is gone but I notice a patch of rash itchy that started in his knees and now there are patches of rashes i...  Read Full »

Do you have a question on Rashes Under The Breast or ?