The Psychology of Antimicrobial Prescribing Behavior

Antibiotic prescribing habits are more complex than one might expect. It is well known that up to 40% of antibiotic prescriptions are considered inappropriate for various reasons. Please read the article to know more. 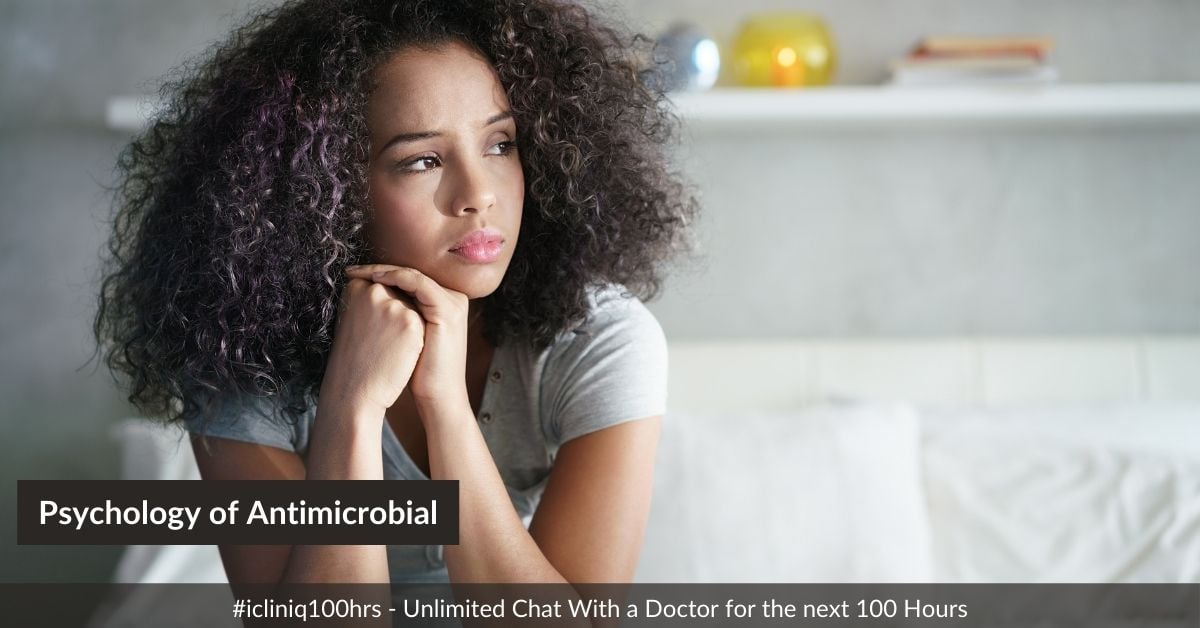 As humans, our decision-making process is influenced by our subjective experiences, emotions, and cognitive bias, sometimes leading to irrational prescribing of medicines that can contribute to individual and societal harm.

For some clinicians, if the science is not enough to deter bad prescribing, it is worthwhile to examine the cognitive biases affecting our clinical judgment to target the psychology that leads to poor decision-making. Here, we review how cognitive biases impact antibiotic prescribing practices.

A cognitive bias, or heuristic, is a mental shortcut used to make quick and efficient decisions, similar to a rule-of-thumb. These heuristics protect us against cognitive burnout from the sheer number of decisions we make every day. When making important clinical decisions, these mental shortcuts can either be assets or liabilities. Antibiotic decisions are influenced by many cognitive biases, often in negative ways.

Related Topics
I get recurrent folliculitis in my upper leg and pubic hairs. Please help.
Can you help with the correct treatment for Staphylococcal infection?
Will antibiotics affect the sputum report?

The commission bias is a tendency toward action over inaction because doing something is perceived to be better than doing nothing. Therefore, prescribing medication such as an antibiotic feels more like an appropriate intervention than watchful waiting, even when the prescription is inappropriate or harmful.

A patient might not be satisfied leaving the office with the advice to go home and rest. It is paramount to remember that every medical intervention carries harm. Some patients visit their physician with the expectation of a prescription or a test. A physician who prefers to eschew confrontation may simply want to please his or her patient by writing a prescription that is medically unnecessary. Antimicrobials are often the target, with upwards of 50% being inappropriate.

The patient’s satisfaction then positively reinforces the physician’s behavior for future encounters. A patient may not always agree with or is content with the advice offered, but the best care should not be sacrificed to please the patient. Sometimes in a busy practice, there is no enough time to have a proper conversation with the patient about the risks and benefits of taking antibiotics. It can also be mentally challenging or even exhausting to explain that no medications are needed for an illness expected to resolve spontaneously.

The cumulative cognitive demand from their daily work might entice some physicians to take the path of least resistance, which often is an inappropriate antibiotic prescription. It can be faster to get the patient out the door with a drug than with appropriate dialogue. This bias is known as decision fatigue.

Quite often, the diagnosis of infection is ambiguous, leading to uncertainty. Some non-infectious conditions can mimic common infections. In the face of uncertainty, some physicians prefer to offer antibiotics to cover the possibility that there might be an infectious process evolving. Those who have difficulty tolerating uncertainty tend to over-prescribe and over-investigate. The antibiotic prescription relieves this anxiety. The absence of complete certainty is the rule in medicine and should not be used as justification for excessive drug use. Even for infections where the vast majority of cases are viral in origin, there is still a tendency to over-prescribe antimicrobials. For example, acute bronchitis is caused by viruses in 90% of cases. The 10% probability of bacterial infection might be unsettling to some clinicians, so they offer antibiotics anyway to avoid missing that slight possibility.

Another example is refusing to de-escalate antimicrobials in case there is a chance of not covering a pathogen. This is known as loss aversion, the tendency to prefer avoiding losses over acquiring gains. Although there is increased cognizance of rising antimicrobial resistance, sometimes the prescribing behavior of physicians does not reflect this awareness.

Treating straightforward infections often results in immediate satisfaction because the patient’s response is expected to be rapid. The instant gratification from achieving a cure creates an association between antibiotics and rewards in our minds. In a situation where there may be slim potential for benefit from prescribing an antibiotic while acknowledging the serious threats of long-term antimicrobial resistance, a clinician may prefer to take a gamble by offering the antibiotic because there is still a potential, albeit small, for an instantaneous reward. This concept of future discounting favors short-term benefits over long-term impacts.

Another common mistake is falsely attributing an event to an intervention, known as illusory correlation. When a physician prescribes medication and a positive response is observed, either clinically or biochemically, there is often an assumption that the drug leads to that outcome. It is important to consider other explanations to avoid falling for this trap. Perhaps the outcome would have occurred without the medication. Maybe the patient improved due to the anti-inflammatory effect of the antibiotic rather than treatment of an infection.

Lastly, we should never forget about the placebo effect. Inadvertently, the illusory correlation might positively reinforce poor prescribing practices. It is known that some physicians do not follow clinical practice guidelines. When they believe that population studies used to inform guideline development do not apply to their patients, they suffer from aggregate bias.

For instance, the national dental, orthopedic and infectious disease bodies of Canada recommend against routine antibiotic prophylaxis for dental procedures in patients with orthopedic hardware, but some surgeons still strongly push for it. While the medical literature is not perfect and cannot capture every unique aspect of individual patients, it is important that if one decides to stray from the guidelines, then there should be sufficient evidence to justify the alternative approach.

Naturally, some infections can trigger a certain degree of fear or anxiety. These negative emotions can profoundly influence decision-making in a way that results in suboptimal care to the patient. Emotional choices can be harmful because they can lead to the use of unnecessarily broad-spectrum antimicrobial therapy, needlessly long durations of treatment, or the use of antibiotics for non-infectious diseases. On the contrary, a care provider who has positive feelings towards a patient, drug, or device might offer more care than medically necessary or certain overuse therapeutics. Whether this affective bias is positive or negative, it steers away from best practice standards. It is important to recognize your own emotional predispositions by asking yourself how you are feeling when making a clinical judgment or decision. Are you treating yourself or the patient? Are you justifying your choices with emotions or with evidence? Remember, we practice evidence-based medicine, not emotion-based medicine.

Consequently, the clinician who favors multiple diagnoses may opt for more antimicrobials to treat several conditions. The odds are either with you or against you; use statistics to your advantage. A level of comfort and familiarity with a drug develops the more it is prescribed. The availability bias affects us when ease of recall of successes or failures influences prescribing habits more so than the actual probabilities of treatment success. If a clinician has had a recent bad experience with a particular medication, he or she might be biased to avoid that drug for the next patient. Likewise, if an intervention has often worked, it is more likely to be prescribed in the future, even if it is not a recommended 1st line treatment. Adherence to guidelines and best practice standards can help to overcome this bias.

A bandwagon effect is a form of groupthink, where there is a tendency to do or believe something because many other people do or believe the same. Sometimes the standard of care is set by the practice patterns of the majority, even though that standard of care is not necessarily best practice. For example, one might be pressured into prescribing unnecessarily broad-spectrum antimicrobial therapy for certain infections because of the culture at that institution. People inherently do not want to be ostracized for being too different. This is very dangerous thinking because it leaves little room for the introduction of new ideas to advance care.

Closely related to the bandwagon effect is courtesy bias, which is the tendency to offer an opinion that is more socially or politically correct than one’s true opinion to avoid offending someone. This might manifest as a desire not to contradict colleagues about antibiotic choices to preserve good working relationships. There can be more than one way to treat infection, and it is essential to be open-minded about variations in prescribing practices. However, if treatment is blatantly substandard, then for the sake of the patient, your colleague’s feelings might need to be hurt for a lesson to be learned.

The overuse of antimicrobials has created a culture where infections are over-diagnosed. The law of instrument is an over-reliance on a familiar tool, ignoring or under-valuing alternative approaches. Because every prescriber has the potential to access an array of antibiotics, it becomes too easy to falsely label someone with an infection without gathering adequate history or obtaining proper diagnostic investigations. When you have antibiotics in your back pocket, everything looks like an infection.

Antibiotic prescribing behaviors are very complex, and they are shaped by our personal and clinical experiences, values, beliefs, culture, emotions, desires, knowledge, education, and training. The interplay between all these elements results in a distinctive prescribing habit among individuals such that a straightforward infection could be treated in many different ways. The cognitive biases that influence our clinical judgment are under-recognized and under-appreciated but have a profound impact on our behaviors and how we treat patients. We must engage in self-reflection of our internal biases and identify methods to overcome them in order to optimize care.

How can I avoid developing a superbug in my mouth?

Query: Hello doctor, I am a 62-year-old female with a history of chronic periodontal disease, particularly involving a pocket between teeth #7 and #8, which is associated with some bone loss and becomes infected every few months. I take fastidious care of my teeth and gums, including flossing, using a pro...  Read Full »

Why am I experiencing burning in my penis with whitish discharge after unprotected sex?

Query: Hi doctor, I have some burning sensation in my penis with some whitish discharge that comes out three to four times an hour. I started to have this after practicing unprotected sex.  Read Full »

Do you have a question on Antibiotics or Staphylococcus Aureus?