What Is Hypoactive Sexual Desire Disorder?

Who Is Affected by Hypoactive Sexual Desire Disorder?

HSDD affects both sexes, although the condition is more prevalent in women - women are two times more likely to experience sexual desire disorders than men; around 35 % - 40 % of women experience HSDD, as opposed to about 5 % to 25 % in men.

Hypoactive sexual desire disorder is attributed chiefly to causes other than medications (from a diagnostic perspective). However, clinically, various reasons may be responsible, including the use of certain medications.

What Are the Signs and Symptoms of Hypoactive Sexual Desire Disorder?

The diagnosis of hypoactive sexual desire disorder rests on the signs and symptoms that include:

The key to diagnosing hypoactive sexual desire disorder lies in certain pre-requisites in tandem with the signs and symptoms:

What Is a Sexual Response Cycle and Why Is It Important for Hypoactive Sexual Desire Disorder?

The sexual response cycle is a progression of physical and emotional changes that occur during sexual activity. It occurs in four phases:

The sexual response cycle guides how sexual dysfunction and sexual desire disorders, including HSDD, are understood, diagnosed, and treated. Given the different physical and emotional changes accompanying the sexual response cycle, it is easier to identify the stage at which sexual dysfunction occurs and determine what underlying component or driving factor needs to be looked into.

Treatment of hypoactive sexual desire disorder should focus on treating the cause, as well as the component that distresses the affected individual most. Often, these factors are one and the same.

Common aspects of treatment are:

Treatment options may include: 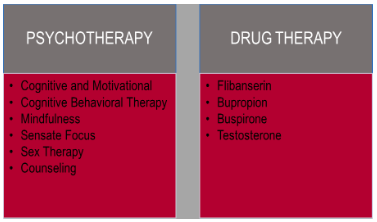 Can Hypoactive Sexual Desire Disorder Be Treated At Home?

Hypoactive sexual desire disorder usually occurs due to a reasonable underlying factor that may require psychotherapy or drug administration. Attempting to “fix” the problem alone may only worsen the situation and increase feelings of guilt and frustration. Consulting a sex therapist or physician is recommended if HSDD symptoms accompanied by extreme distress are cropping up.

How Can Partners Help?

Partners, like the patients, may also be suffering from guilt, worry, and feelings of inadequacy. It is important that they also refrain from attempting to fix the patient or place blame on themselves or their partner. Providing support and understanding that the disorder is not necessarily because of a lack of love is necessary to maintain a happy relationship and achieve better outcomes from treatment.

The distress that accompanies disorders of sexual desire is valid and understandable. Reaching out to a supportive therapist, being accepting of oneself, and remaining patient and optimistic will lead to more satisfying sexual outcomes.

How to Manage Hypoactive Sexual Desire?

The management of hypoactive sexual desire begins with identifying the underlying cause and providing treatment for the cause in addition to the effect (if required). This means that treatment is likely to cover two key areas:

What Is the Converse of Hypoactive Sexual Desire Disorder (HSDD)?

What Does Hypersexuality Mean?

Hypersexuality or excessive sexual desire or sexual addiction is characterized by a persistent preoccupation or obsession with sexual thoughts, fantasies, and activities. It can cause personal distress, relationship and job stress, and a general decrease in wellbeing.

Is Hypersexuality Likely to Disappear?

Making hypersexuality go away or disappear completely is not a viable option. However, treatment of hypersexuality can help to control the excessive sexual urges and behaviors, while also promoting an active, healthy sex life. Management strategies include:

Situational hypoactive sexual desire disorder is a form of HSDD that is specific to certain situations or people. It may occur only when having sex with one particular sexual partner or during a specific sexual activity. It may also occur in times of extreme stress.

What Are the Symptoms of Male Hypoactive Sexual Desire?

Male HSDD may present with the following symptoms:

- Diminished motivation and interest in sexual activity of any form for at least three months.

- Changes in sexual behavior that correspond to reduced motivation.

- Emotional distress due to the inability to feel aroused or interested in sex.

Do you have a question on Hypoactive Sexual Desire Disorder or ?