Vulvar cancer is a type of cancer that occurs on the outer surface of the female genitalia. Read the article to know about the causes, symptoms, types, stages, risk factors, diagnosis, and treatment. 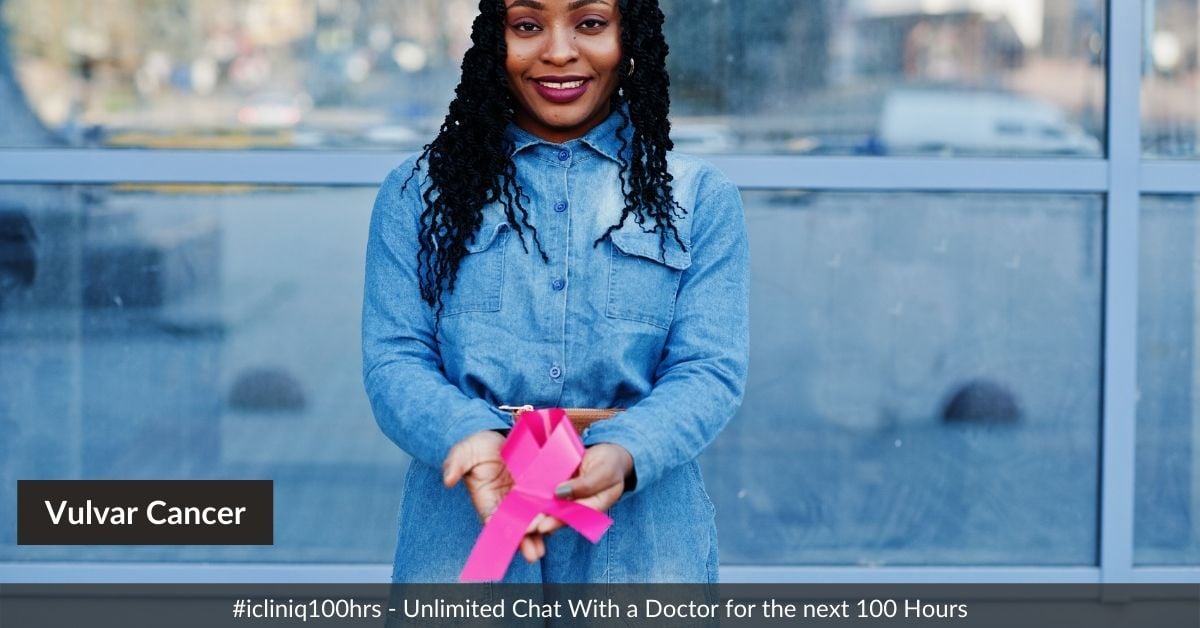 What Is Vulvar Cancer?

Vulvar cancer usually occurs at the opening of the vagina or the urethra. The women’s external genitalia is called the vulva. The vulva is the fatty tissue folding on the two sides of the vaginal opening, the labia majora and labia minora. Cancer on the vulva most commonly occurs in the labia. But it less commonly occurs in the clitoris and on the glands in the vaginal opening called Bartholin’s gland, which secrete mucus-like fluid for lubricating. Cancer is the growth of healthy tissue that grows uncontrollably and forms a mass called a tumor. A cancerous tumor can be malignant, which means that it can spread to other parts of the body. The most common form of vulvar cancer, depending upon the tissue, is squamous cell carcinoma. The less common type of vulvar cancer is sarcoma, adenocarcinoma, melanoma, and verrucous carcinoma.

Cancer can be caused due to cells that grow uncontrollably. Malignancy occurs when the cancerous cells manage to spread to other parts of the body through blood or lymph nodes. The healthy tissues are destroyed through a process called an invasion. The cell division and growth occurs by angiogenesis, which makes new blood vessels and feeds themselves. When cancer develops and spreads to other parts, it is called metastasis. So with the help of lymph nodes, it can spread to other parts of the body and other organs. The cells that promote growth are called oncogenes, and those slow down cell growth and cell death are tumor suppressor genes. Any change in the DNA is called a mutation. These DNA mutations can initiate oncogenes and suppress tumor suppressor genes.

What Are the Signs and Symptoms of Vulvar Cancer?

The signs and symptoms of vulvar cancer may include,

Who Are All at Risk for Vulvar Cancer?

The risk factors for vulvar cancer include:

What Are the Types of Vulvar Cancer?

What Are the Stages of Vulvar Cancer?

Stage 0- Here, the cancer is present only on the surface of the skin.

Stage 1- The cancer is limited to the vulva or the perineum, and it is up to 2 cm in size.

Stage 3- In this stage, cancer has now reached the nearby tissues like the anus or vagina and the lymph nodes.

Stage 4- In this stage, cancer might have reached both sides of the groin and may have spread to the urethra, bladder, or bowel.

What Are the Methods Used for the Diagnosis of Vulvar Cancer?

The tests used to diagnose vulvar cancer are:

1. Examination of the vulva with a medical history.

2. Biopsy to confirm vulvar cancer, and the staging is done with imaging scans. A biopsy is required if there is any ulceration, mass or a lump is present. Depending on the biopsy reports further testing can be done.

How Vulvar Cancer Can Be Treated?

The treatment for vulvar cancer includes:

1. Surgery- The common treatment of vulvar cancer is surgery. It usually aims to remove cancer while leaving the sexual function intact. If the cancer is diagnosed at an early stage, limited surgery is required. The later stage may spread to the other nearby organs like the urethra, rectum, and vagina, and the surgery will be more extensive. The types of surgery include:

2. Radiation therapy- This helps to shrink the deep lesions before surgery so that it will be easier to remove. Its usage depends on the stage of cancer.

3. Biologic therapy- It is also called immunotherapy. It uses synthetic or natural substances to help the body to fight against cancer on its own. Imiquimod, in the form of a cream, is applied topically to treat vulvar cancer.

4. Chemotherapy- It is a part of palliative care along with radiotherapy. A cream or lotion is applied topically on cancer, but it depends on how far cancer has spread.

How to Prevent Vulvar Cancer?

Vulvar cancer can be prevented by avoiding risk factors and treating precancerous lesions in the early stage.

For more information, consult a doctor online at iCliniq.com.

How Will Vulvar Cancer Appear?

Vulvar cancer will appear like a sore or lump in the vagina. It might be seen along with itching. It is mostly seen in older people, but it can affect women of all age groups.

What Are the Signs and Symptoms of Vulvar Cancer?

The signs and symptoms of vulvar cancer are:
- A growth or lump in the vulvar region.
- Enlarged lymph node.
- An abnormal texture of the skin.
- Itching, soreness, pain, or burning sensation.
- Pain during urination.
- Bleeding and discharge from the vagina.

How Do I Check Myself for Vulvar Cancer?

You can follow the below steps to check your vulvar cancer.
- You can squat, stand, or sit over a mirror by holding the mirror in hand. You will be able to see the genitals clearly. You can also ask for other's help also. Check the area where your pubic hair grows.
- You should also notice the presence of moles, lesions, rashes, and bumps. Look for any discoloration and bumps.
- The outer and the inner lips should be checked regularly.

How Fast Does Vulvar Cancer Progress?

What Happens if You Have Vulvar Cancer?

When you have vulvar cancer, the external parts of the genitals might be affected. The symptoms of vulvar cancer might include itching, lump, and bleeding. Some patients also complain of pain and discoloration in the skin.

Who Gets Vulvar Cancer?

Vulvar cancer is known to affect women who belong to the age group of 65-75 years. Sometimes, patients who are younger than 40 years are also affected. People who engage in unsafe sexual practices and multiple sexual relationships are highly prone to vulvar cancer.

What Are the Risk Factors of Vulvar Cancer?

What Should I Do if I Think I Have Vulvar Cancer?

If you are suspecting of having vulvar cancer, you have to seek the doctor's help as soon as possible. The doctor will assess your health status and discuss with you the various treatment options like chemotherapy, radiation therapy, and surgery.

Do You Lose Weight With Vulvar Cancer?

Yes, patients with cancer generally lose weight. People who are affected by vulvar cancer might lose weight due to abnormal bowel and bladder movements. In addition to this, vulvar cancer patients also face constant fatigue.

Who Are the Types of Vulvar Cancer?

There are two known types of vulvar cancer. They are:
- Vulvar melanoma. It is cancer that is initiated by pigment-producing cells.
- Vulvar squamous cell carcinoma. This cancer begins as a small and thin flat cell on the vulvar surface.

What Is the Survival Rate of Patients With Vulvar Cancer?

The patients who are affected by vulvar cancer are expected to have a five-year survival rate. The survival of the patient depends on the stage at which the cancer is diagnosed. Cancer that has not spread to other organs can have an average survival of 86%.

Why am I experiencing right-sided abdominal cramps?

Query: Hi doctor, The following symptoms started about four hours ago. I am experiencing cramps on my right side, near my hip bone. I feel them more in the front but at times, can feel it in my back. At first, the cramps were minutes apart, but now they are roughly 30 seconds apart. I am a 43 year old fema...  Read Full »

Do you have a question on Itching or Chemotherapy?