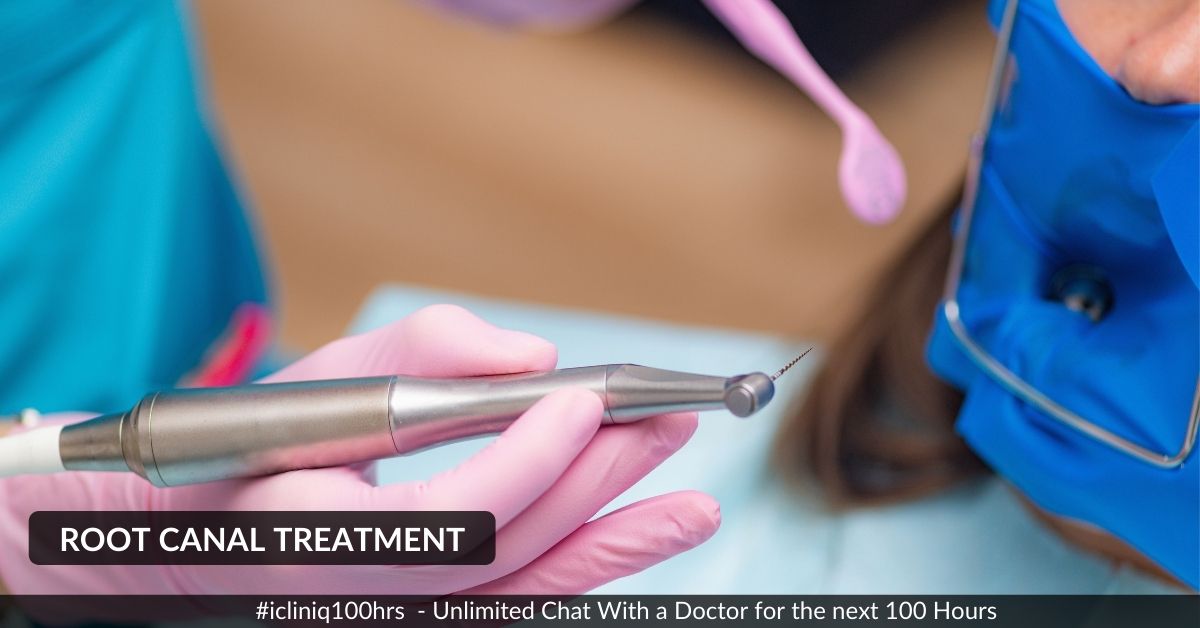 What Is Sodium Hypochlorite?

Sodium hypochlorite (NaOCl) can be commonly found in a dentist's office. It is used as an irrigant during root canal treatments as it dissolves organic soft tissue of pulp and predentin. It is usually used in a dilution of 0.5 % or less. Higher concentrations of sodium hypochlorite are cytotoxic. It has a foul chlorine smell and taste. When sodium hypochlorite extends through the periapex of the tooth and comes in contact with the periapical tissues, it causes acute inflammation followed by necrosis.

What Are the Advantages of Using Sodium Hypochlorite?

What Is a Sodium Hypochlorite Accident?

What Are the Signs of Sodium Hypochlorite Toxicity?

The signs and symptoms differ for each site and include the following:

What Are the Effects of Sodium Hypochlorite Accident? 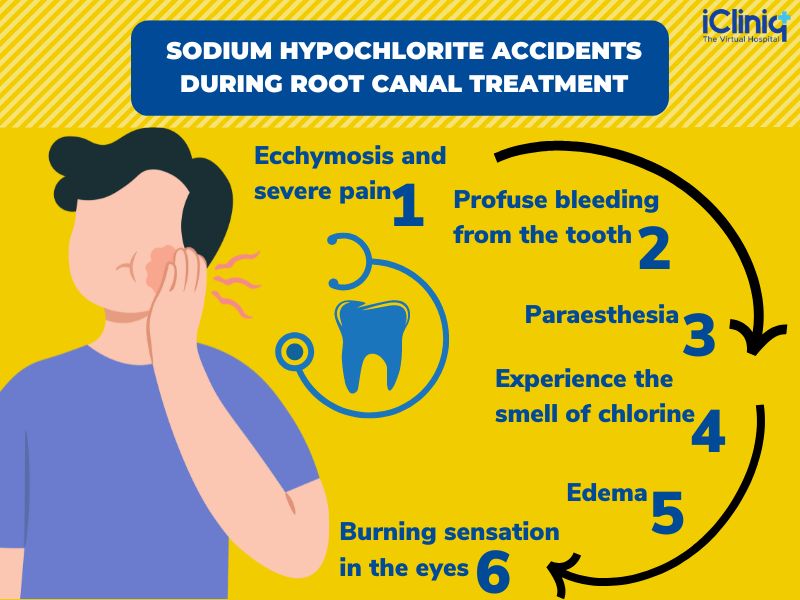 The severity of the damage depends on the pH of the solution and the duration of exposure. Also, the exposure site plays a significant role in determining the effect.

When sodium hypochlorite is extruded beyond the root canal, even a minimal amount, it results in profuse bleeding from the root canal cavity. It also produces rapid swelling of the involved tissues. It is attributed to the ability of NaOCl to damage the blood vessels and the release of histamine. The ecchymosis and edema can involve the affected side of the face, including the eyes and oral cavity regions. In some cases, pain and the affected region's erythema are present. A tingling and burning sensation have also been reported.

When it comes in contact with the eyes, sodium hypochlorite can lead to endophthalmitis. It can lead to severe complications in a few cases, like loss of the eye.

Allergic reactions of sodium hypochlorite cause the following complications:

When sodium hypochlorite comes in contact with oral mucosal tissues, it can lead to the development of secondary infections. Also, there is a possibility of swallowing the solution that might lead to further systemic complications.

How Does a Dentist Manage NaOCl Accidents?

After a suspected exposure to the eyes, the patient is asked to cleanse the eye with normal tap water or saline. The patient is then referred to an ophthalmologist immediately for further management.

Intravenous administration of antihistamine medications and steroids is the first aid measure to be carried out. It is then followed by rushing the patient to an emergency department.

Initially, the mucosa is washed with water, and appropriate analgesic and antibiotic drugs are given to prevent the occurrence of associated secondary infections. In case of any inhalation or ingestion of sodium hypochlorite, the patient should be immediately sent to the emergency department for preventing and managing complications.

How Can a Dentist Avoid NaOCl Accidents?

Sodium hypochlorite has a significant antibacterial property that helps in reducing bacterial infection along the root canal. But it also has its own harmful side effects when accidental contact occurs. By following adequate preventive measures, the incidence of hypochlorite accidents can be entirely avoided. When such a thing happens, it should not be neglected and should be managed immediately.

What Is Sodium Hypochlorite Used for in Dentistry?

Sodium hypochlorite is a disinfecting agent which is effective for the disinfection of viruses, bacteria, fungi, and mycobacterium. It is used for irrigating root canals during the root canal treatment procedure as it dissolves the organic tissues of pulp and pre-dentin.

How Do You Dilute Sodium Hypochlorite in Dentistry?

What Happens if You Swallow Sodium Hypochlorite During the Root Canal?

Sodium hypochlorite is the most common root canal disinfectant used in varying concentrations. The amount of sodium hypochlorite that is used during root canal treatment is very minimal, and the chemical gets diluted with the saliva, so there should be no side effects other than bad taste. But if you feel you have swallowed sodium hypochlorite, you may experience gastrointestinal discomfort, nausea, and vomiting.

Why Is Sodium Hypochlorite Used in the Root Canal?

Sodium hypochlorite can be used as a root canal irrigant during the root canal procedure as it dissolves the organic tissues in the pulp and pre-dentin. It flushes out the loose debris from the root canals.

What Percent of Sodium Hypochlorite Is Used in Endodontics?

Why Do Dentists Use Bleach in Root Canals?

Sodium hypochlorite is used as a bleaching agent during the root canal treatment to clean the canals and pulp chamber of a tooth to dissolve the bacteria if present and to flush out the pulpal remnants.

What Is the Ideal Concentration of Sodium Hypochlorite for Root Canal Irrigation?

What Is the Common Use of Sodium Hypochlorite?

How Does Sodium Hypochlorite Kill Bacteria?

Sodium hypochlorite is a strong oxidizing agent, so when sodium hypochlorite comes in contact with bacteria, viruses, or fungi, it oxidizes molecules in the cells of germs, hydrolyzes cell proteins, and kills them.

How Poisonous Is Sodium Hypochlorite?

Is Sodium Hypochlorite Safe for Skin?

How Long Should the Canals Be Irrigated Using Sodium Hypochlorite?

To achieve thorough and complete disinfection of the root canal, sodium hypochlorite has to be let inside the canal for at least 30 minutes, and it was also proven that when used for a lesser time, the treatment outcomes had decreased.

Article Overview: Gum diseases can result in much more serious effects on one’s general health than missing and decayed teeth. This article aims to educate about the effects of gum and dental health on general health. Read Article

Following RCT and crown, my gums are swollen. Why?

Query: Hello doctor, I had a root canal performed before four months and a gold crown was fitted before two months. The tooth number is 14. The tooth had a crack in it a few years ago and finally became irreversibly inflamed and required a root canal. My tooth is still sensitive to pressure while chewing a...  Read Full »

Can fixed retainers be worn during scaling and root planing treatment?

Query: Hi doctor, I have just been told that I have gum disease and 3 mm to 6 mm pockets. And, my wisdom teeth have 8 mm pocket. I have braces on now and I am due to have them off next month. I need to get scaling and root planing treatment to treat my gum problems. Can I still wear a fixed retainer? I r...  Read Full »

Do you have a question on Root Debridement or Root Canal Treatment?