What to Do If You or Your Child Suddenly Start Bleeding from the Nose? 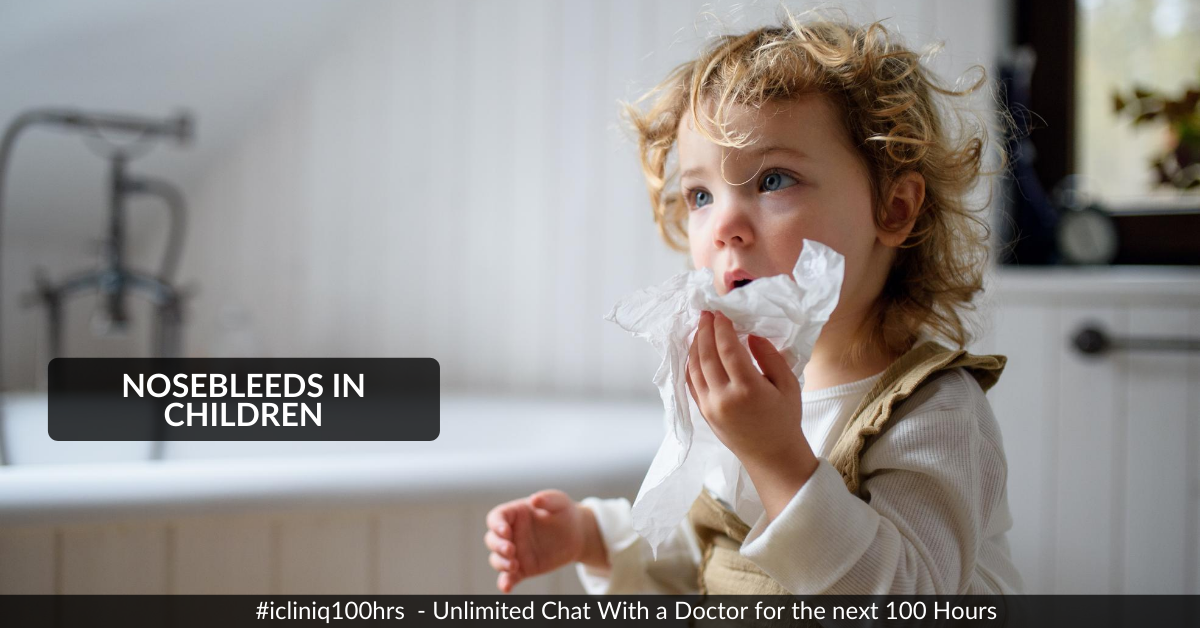 How Prevalent Is Epistaxis?

Epistaxis is commonly seen in children between 2 to 10 years and older adults between 50 to 80 years. It is not uncommon for the nose to bleed in a child who has a nose-picking. One needs to be aware of the causes and the immediate first-aid in such cases.

What Are the Causes of Epistaxis?

Bleeding from the nose is known as Epistaxis. Nasal bleeding can occur due to various reasons. In an older adult, a rise in blood pressure will usually cause bleeding from the nose. Other causes are common cold, infections in sinuses, weather changes, bleeding disorders, and cancers of the nose and sinuses. Adolescent male bleeding profusely should be investigated to rule out an angiofibroma tumor.

The factors that cause epistaxis or nose bleeding are broadly classified as:

Nosebleed generally starts from just inside the nose entrance, on the middle, harder part of the nasal septum (the wall between the two nasal cavities). Blood vessels of this region, being fragile, rupture easily and begin to bleed. The factors that can cause nosebleed possibly are:

What Are the Types of Epistaxis?

The epistaxis is classified into two depending on their origin as:

How to Diagnose Epistaxis?

Most nosebleed cases are self-diagnosed and treated at home, especially the anterior nosebleeds. People who have severe and unresolved nosebleeds to home remedies should seek medical advice. The doctor may ask for the following tests like blood tests and medical history. Often, posterior epistaxis is diagnosed only after failing to manage anterior epistaxis or noticing bleeding into the posterior pharynx or throat. It is often harder for healthcare professionals to visualize the source of posterior bleeding in a physical examination; thus, a clinician usually performs a nasal endoscopy to help identify the origin of the bleed.

How to Manage Epistaxis?

Depending on the cause and diagnosis of the nosebleed, treatment is prescribed. Generally, when the nosebleed starts as home treatment, the patient is made to sit up straight, pinch the nose, and hold their head backward.

Pouring cold water slowly overhead or keeping a wet cloth relieves the condition in the majority of the cases.

What to Do If You or Your Child Suddenly Start Bleeding from the Nose?

The first aid measures to be taken during a nosebleed are:

The doctor will examine the nose and decide on further testing and treatment based on the cause of Epistaxis. He may advise nasal endoscopy and cauterization of the blood vessel. If the bleeding is profuse, it may require nasal packing and hospitalization.

How to Prevent Epistaxis?

Here are a few tips you can use to prevent nosebleeds:

How Severe Is Nosebleeds?

Bleeding from the nose can be alarming, but all nosebleeds are not severe, often treated at home. However, some should be checked by the doctor.

A few children may experience nosebleeds one or two times a year, but others seem to get them more frequently. Since the lining of the nose is overly irritated, the exposed blood vessels can bleed even at the smallest instigation.

A few nosebleeds that start from the back of the nose may usually involve large blood vessels, resulting in heavy bleeding that can be dangerous. This may require medical attention, mainly if the bleeding occurs after an injury or when the bleeding has not stopped even after applying 20 minutes of direct pressure to your nose. If you have frequent nosebleeds, consult with your doctor because this could be an early sign of other medical problems that need to be diagnosed.

How to Stop Nose Bleeds?

Article Overview: Bleeding from the nose is a very common condition and usually nothing to worry about. This article discusses the steps for managing an active nose bleed. Read Article

What Is Nose Bleeding (Epistaxis)? Nosebleed, also referred to as epistaxis, is one of the most common ear, nose, and throat (ENT) emergencies present to the emergency department or the primary care clinic. When there is bleeding from the nose, it is called nose bleeding. It is very common, particu...  Read Article

Does nose bleeding occur after a septoplasty?

Query: Hello doctor, Last week, I have done a septoplasty and the dressing was taken out yesterday. Now my nose bleeds a lot the whole day and then it was normal. Today I woke up and there was a lot of blood in my nose and it was dry inside. Is it because I missed out taking the nasal spray while I was asl...  Read Full »

On bumping, my 4-year-old son got nose bleeding. How to treat it?

Query: Hello doctor, My 4 year old son bumped his nose on his cousin, while in a swimming pool. It bled a lot, but I pinched his nose for a couple of minutes while he was sitting on my lap. The bleeding stopped immediately. Now, he is calm and watching television. Should I take him to a doctor immediately?  Read Full »

Do you have a question on Epistaxis or Bleeding From Nose?