AIDS (acquired immunodeficiency syndrome) is the most advanced stage of HIV infection. To know more in detail, read the article. 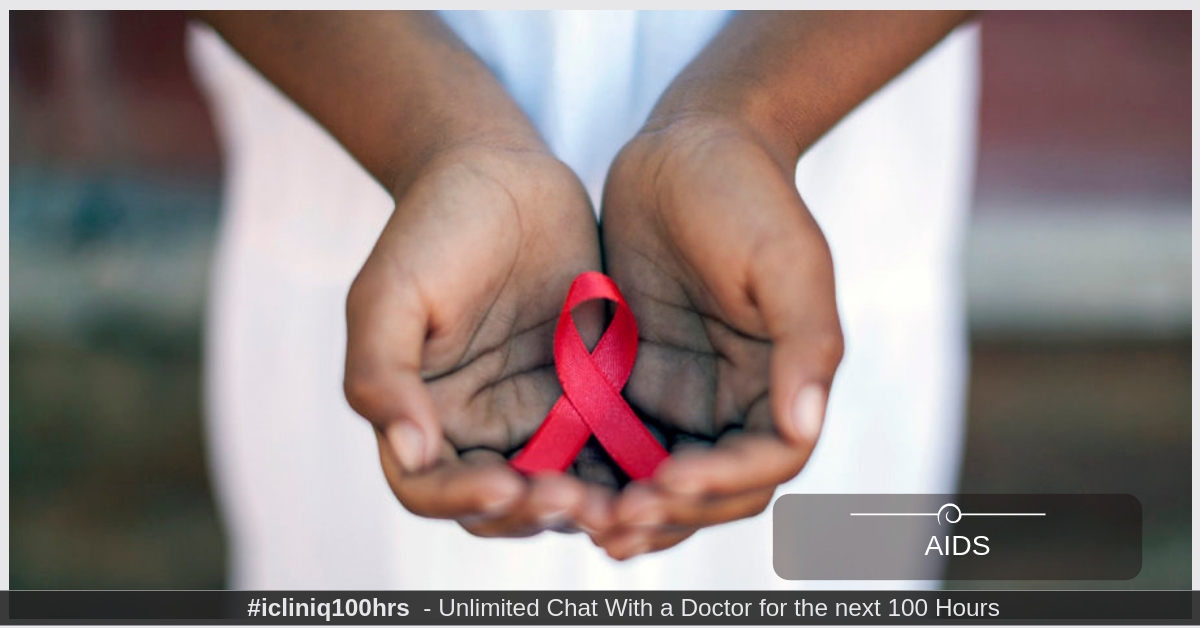 AIDS is defined by the presence of at least one major and two minor infections and is not related to CD4 (clusters of differentiation 4) count. Human immunodeficiency virus (HIV) causes HIV and AIDS. AIDS (acquired immunodeficiency syndrome) is the most advanced stage of HIV infection. If HIV infection is left untreated, it gradually affects the immune system, which results in AIDS as the body becomes susceptible to infections. Without treatment, 50 % of people with HIV develop AIDS within ten years. Since the first documented case of AIDS in 1981, nearly 35 million people have died due to conditions resulting from this disease. But now, with the help of combination antiretroviral drugs, HIV infection has been converted into a chronic disease that people live with. With proper treatment and care, people with HIV infection can expect a near-normal life expectancy. Once HIV progresses to AIDS, the patient typically survives for about three years without treatment. But if the patient is infected with some dangerous opportunistic infection, then life expectancy falls to about a year.

What Are the Types of HIV?

There are two types of HIV, which are HIV-1 and HIV-2, both of which can cause AIDS. The only difference is that HIV-2 cannot be transmitted easily, and once infected, it takes time for HIV infection to lead to AIDS.

What Are the Factors Responsible for the Rapid Progression of HIV to AIDS?

The progression of HIV to AIDS depends on a lot of factors like:

What Are the Symptoms of AIDS?

The symptoms of AIDS are:

What Are the Opportunistic Infections of HIV?

How Can Opportunistic Infections Be Prevented?

HIV patients can prevent the disease from progressing to AIDS by preventing opportunistic infections by:

How to Diagnose HIV or AIDS?

The diagnosis of HIV or AIDS can be made through saliva or blood tests. The recommended tests are:

How Can AIDS Be Treated?

AIDS is a potentially life-threatening disease caused by the human immunodeficiency virus. This virus damages the immune system and interferes with the body’s ability to fight infection. There is no cure for AIDS, but medications can prevent the progression of the condition. Antiviral medications for HIV have shown reduced mortality around the world.

Why the Term AIDS for Acquired Immunodeficiency Syndrome?

Acquired immunodeficiency syndrome (AIDS) is caused by a virus called human immunodeficiency virus (HIV). AIDS can be a potentially life-threatening disease and needs immediate medical intervention. HIV weakens the immune system leading to opportunistic infections such as HSV-1 (herpes simplex virus-1) infection, tuberculosis, and candidiasis. HSV-1 infection is a viral infection characterized by lip and mouth sores. Tuberculosis is a lung condition that is caused due to the bacterium called Mycobacterium tuberculosis. Candidiasis is a fungal infection caused by Candida species and is characterized by fungal infection in the mouth, throat, esophagus, and genitals.

What Do the Three Stages of AIDS Include?

Acquired immunodeficiency syndrome (AIDS): In this stage, HIV destroys the CD4 T lymphocytes. Thus the immunity of the individual is weakened.

What Are Some Examples of Acquired Immunodeficiency?

What Do the Three Types of Acquired Immunity Comprise?

Acquired immunity refers to the immunity acquired or gained by the individual after birth. Three types of acquired immunity are there, innate, adaptive, and passive types of immunity. The individual develops immune system defenses after birth through various mechanisms. Adaptive immunity occurs after being exposed to a microorganism or post-vaccination. Passive immunity occurs when the antibodies are received from external sources.

What Are the Two Known Auto-Immune Diseases?

What Is the Name of Two Blood Cells Responsible for Acquired Immunity?

How Is the Immune System Controlled?

The immune system is controlled by the immune cells, proteins, and tissues of the body. The antigen or disease-causing pathogen is identified by the body, and in response to that, antibodies are produced. Tonsils, adenoids, thymus, lymph nodes, appendix, bone marrow, and Peyer's patches are organs of the immune system.

How Can the Immune System Be Improved?

The immune system can be improved by eating healthy foods and maintaining physical health.  It includes lots of fresh fruits and vegetables in the diet, washing hands regularly, and maintaining personal hygiene. Always be updated on vaccines for various diseases and get them as soon as possible. Quit smoking, be active, and have a good sleep daily.

How to Boost the Immune System in 24 Hours?

The immune system can be boosted in the following ways:
- Stay hydrated and drink lots of water.
- Consume bone broth which is packed full of minerals and vitamins.
- Increase vitamin-C-rich foods in the diet.
- Get enough sunlight to boost vitamin D levels.
- Keep gut health boosted by consuming fermented foods.
- Rest enough for the immunity to work well.

What Vitamins Strengthen the Immune System?

All the vitamins help keep the individual healthy and keep the disease at bay. Vitamins C, D, and E are important to boost the individual's immunity. Folic acid supplements and an adequate amount of proteins also help improve the immune system.

How to Test the Strength of the Immune System?

Blood tests are run to check the strength of the immune system. The levels of immune cells and immunoglobulins in the blood will give a picture of the immune health of the individual to the physician. Prenatal testing is done on patients with immunodeficiency disorders to prevent the spread to offspring.

How to Reset the Immune System Naturally?

What Are the Signs of a Weak Immune System?

What kind of muscle pain is associated with ARS?

Query: Hi, I am a 31 year old male. About 38 days before I had sex with a CSW (Commercial Social Worker). It was protected vaginal sex and protected oral sex. Also there were deep throat kisses which lasted almost a minute. I am not sure if the condom was torn during the intercourse.  Since last 3 weeks ...  Read Full »

Do you have a question on Hiv or Aids?