Q. Are my symptoms due to HIV infection? I had a high-risk exposure 15 months ago.

Answered by
Dr. Ravinder Kaur Sachdeva
and medically reviewed by iCliniq medical review team.
This is a premium question & answer published on Nov 24, 2017 and last reviewed on: Jun 26, 2019 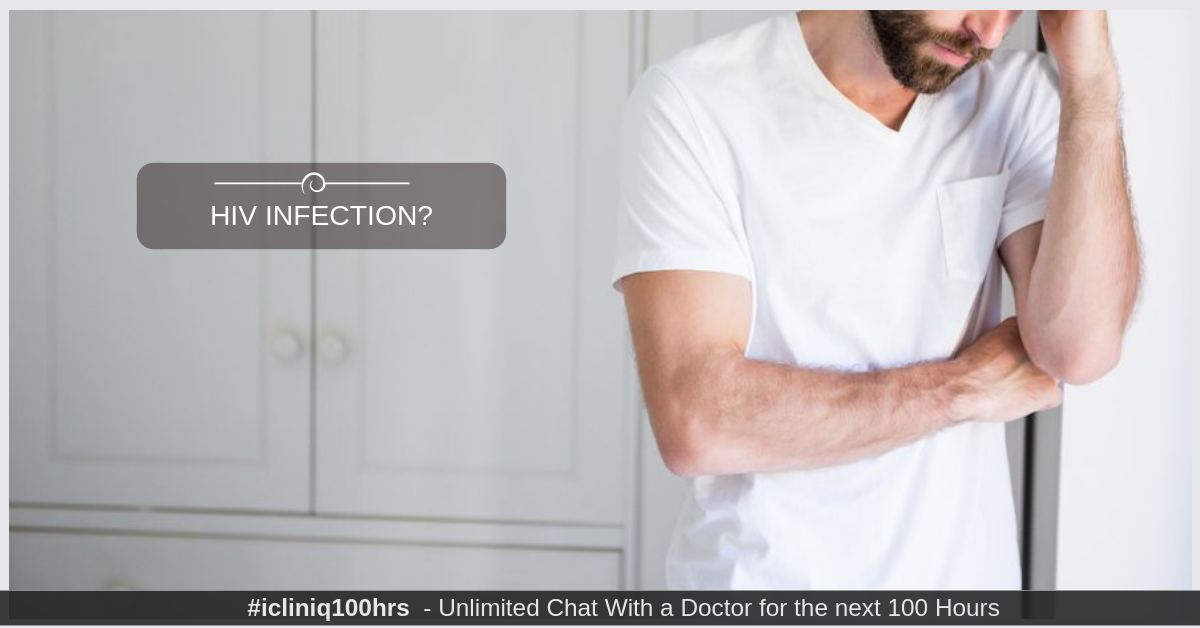 After 15 months of unprotected sex, I went for HIV test called Comb AIDS test but, the result came back negative for both HIV-1 and 2. Again after three months, I redid the test, but even this time, the result was negative. I was not satisfied, so I went for ELISA test, and again the results came back negative. I consulted two general physicians, who told me that I do not have HIV. But, I am still worried because of the symptoms that I have. I am a male, who weighs 62 kg, and I am 6 feet tall.

The symptoms i'm having are:

I remember having loose motions after a week of unprotected sex. At that time, the doctor told me that I have food poisoning, and I was alright after taking medicines. Are these HIV tests done by me reliable? Was the loose motion caused due to HIV? Is it possible that my immune system was so weak to detect antibodies during my HIV test? Should I go for another test such as PCR RNA test? Please help me, I am worried. Your kind response will be appreciated. Thank you.

The test kits used to diagnose HIV are highly sensitive and specific and gives accurate results. The majority of the people who are infected with HIV (human immunodeficiency virus) develop antibodies by three months, and even in the rare instances of late seroconversions, they develop HIV antibodies by six months.

You can rely on your HIV screening test results. If there had been no other exposure other than that, you do not require any further test.

The symptoms which you mentioned could be due to various reasons and cannot be attributed to HIV. In fact, there are no specific symptoms or signs which can lead to the diagnosis of HIV. As per the above information, you are HIV negative. Just relax.

Hope your query is answered, but if you have any other query, please do not hesitate to ask or call anytime. Best wishes.

I have some more questions, and please reply. I used to pee frequently, and it produces a foul smell. It makes me feel that I may be HIV positive. I am taking medicine called Amroid, which I think is a herbal or ayurvedic product to cure my piles problem. Is there any chance that the mentioned medicine would have made my HIV test false negative? Are comb AIDS test and ELISA negative after 15 to 16 months of unprotected sex too late to detect antibodies? I hear that when HIV become AIDS, then HIV antibody test result is negative. So, I am wondering if I may be at the AIDS stage. Honestly, I have no high-risk exposure after the unprotected sex dating 15 to 16 months back. As you have assured that there is no need for further testing, what do you think about PCR RNA test? Should I go for that test or I do not need to do that? I might be confusing you through my long statements, but I really need your help. I am very worried. I would be grateful if you would take a serious study of my case and give me a detailed reply. Thank you.

Let me answer your question step by step:

For urinary complaints, I suggest you get a routine urine examination, urine culture, and sensitivity tests done. It is unlikely that intake of medicines will affect HIV-antibody test results.

Comb AIDS test is a highly sensitive and specific test. It can be taken even at four weeks of exposure. A negative test result at 15 to 16 months is suggesting that probably there was no exposure to HIV. It is the sufficient time in which HIV if exposed, the body will mount a detectable antibody response.

Since there was no exposure to the virus, the test is negative. Also note, not all exposures will lead to HIV. The risk is 5 in 10,000 exposure in insertive vaginal sex. Advanced stage of HIV with immune suppression usually occurs after 5 to 10 years of infection and not few days or months.

As per the recommendations, HIV antibody test is sufficient for screening. Please relax and accept your HIV negative test. Certain instances do happen, but now you have sufficient evidence of your negative HIV status. Move on. Take precautions in future.

Hope I have answered your questions, but you are welcome to ask or call for any further question.

I have few more questions. Which generation is Comb AIDS test? Is it third or fourth generation? What about doctors suggesting for PCR RNA test? Because a doctor told me that it is safe to say that I am HIV negative, but if I want to be surer, then I better go for PCR RNA test. I got alarmed by that. But, I also heard from other sources that PCR RNA test is not required after six months of possible exposure. What do you say about this issue? I am physically a weak person, so is there any chance that my body did not produce any antibody to detect the HIV during the Comb AIDS and ELISA tests? I am not very sure about the last exposure, but I am sure that maximum time passed is 18 months. Then what is the cause of my problems such as ulcers in the mouth, throat pain, itchy and pain in ears, black and red spots on my back, itching on the private part, pungent smell of urine and extreme fatigue, waking up suddenly at night while sleeping? I have never experienced extreme fatigue like this before. Would you please give a patient reading and reply. Thank you.

The answers to your queries are:

Whatever generation test you did, you have been found negative after 15 months of exposure, so no need to worry. Comb AIDS test detects HIV 1 and 2 antibodies.

HIV RNA PCR is not recommended for routine HIV screening. Rarely false positive test response can be seen and are not designed for screening purpose. It has a role in the routine monitoring of HIV-infected person.

These symptoms could be due to various reasons and can occur otherwise also. It cannot be attributed to HIV alone. Get a general physical evaluation and routine hemogram, LFT (liver function test), RFT (renal function test), urine routine examination, and culture sensitivity.

Related Questions:
HIV RNA was negative on 21st day? Can it be positive later?

I tested negative for HIV, and my ELISA test score is 0.32. Is there any chance of getting HIV?


The antibody test for HIV at four weeks can determine 95% of infections ... I think no chance is available for getting HIV infection, and 032 will not increase in th...   Read full

HIV 1 and 2 are nonreactive 28 days after exposure. Should I repeat it later?


HIV infection has a window period of one to three months during which these test results may be false negative ...   Read full