What does fundal placental position mean? Is it necessary to be concerned about it? And why? Get all your doubts cleared here. 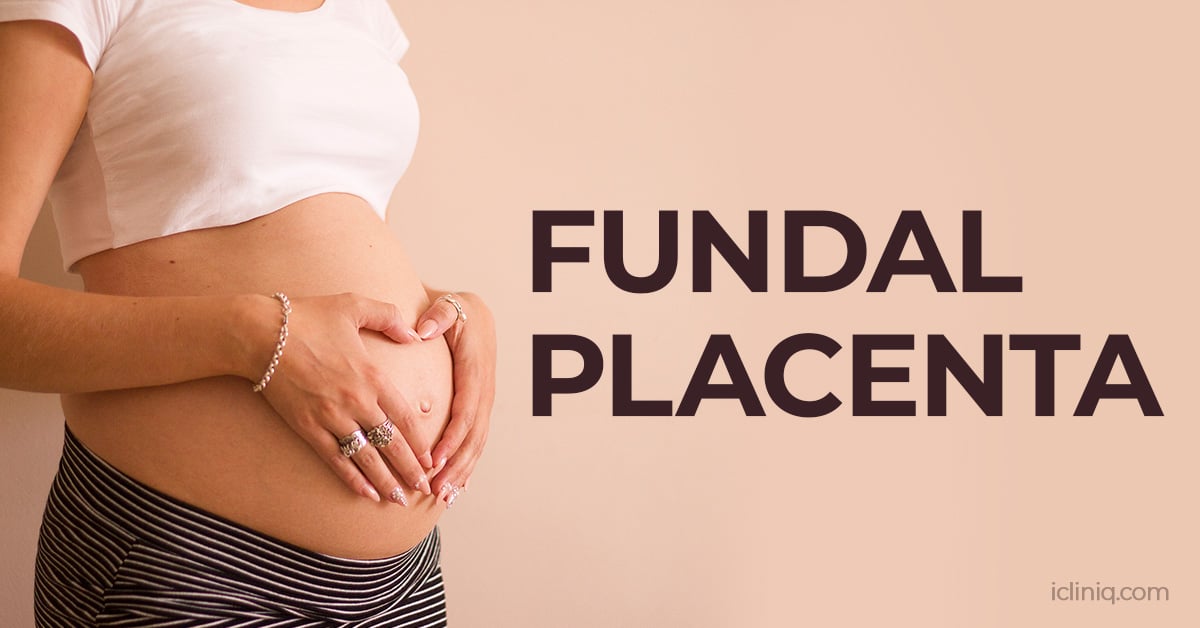 What Is a Placenta?

The placenta is an essential organ that is present only during pregnancy. It plays a significant role in the development of the growing fetus. It helps transfer the oxygen, essential nutrients such as calcium and protein, and hormones to the growing baby and remove waste from the baby's blood.

A placenta will usually develop in the third week of pregnancy. It can be visible as early as ten weeks during an ultrasound. The placenta is attached to the baby through an umbilical cord.

The placenta is commonly expelled from the body after the delivery, while in some cases, it is removed manually after vaginal birth. People who have a retained placenta can experience certain post-delivery complications like bleeding or infection.

The placenta is developed when the fertilized egg gets embedded in the uterus. The possible locations of the placenta are:

What Is Fundal Placenta?

A fundal placenta, also called the fundic placenta, indicates that the placenta is formed in the top region of the uterus, in between the two fallopian tube openings, also known as the fundus.

The fundal placenta position is common, and the risk is low because the position alone will not pose any complications. As with any placental location, monitoring a fundal placenta's condition is essential to ensure that it provides your baby with the support they need. This will be done during a regular pregnancy ultrasound.

A few people may experience a combination of fundal-anterior or fundal-posterior positions. Placental positioning is usually monitored between 18 and 21 weeks of pregnancy with the help of an ultrasound.

What Are The Types Of Fundal Placenta?

A fundic placenta can be classified as either:

A placenta formed at the top and continues down to the front of the uterus (near the belly) is called the anterior fundal placenta.

A placenta that is formed at the top and continues down to the back of the uterus (near the spine) is called the posterior fundal placenta.

Is It Normal To Have A Fundal placenta?

Yes, it is normal to have a fundal placenta because having a fundal placenta seems to be pretty straightforward. It is one of the most familiar placental locations. The placenta usually, while growing, can sufficiently nourish the growing fetus throughout the pregnancy. And as the pregnancy progresses, the placenta may tend to move toward the upper region of the uterus. Unless accompanied by any other signs or symptoms, it is rarely a cause for concern.

What Happens If Your Placenta Is In A Bad Position?

If your placenta is in a fundal position, there is no need to be concerned about it because the baby will still get the nourishment unless you have signs and symptoms. Such symptoms may include:

If you have these symptoms, please seek medical attention.

Which Placental Position Is Good For Normal Delivery?

The lateral placentas can increase the baby's chances of being in a breech position, leading to complications in the latter stages of pregnancy. The only placental position that requires a cesarean section is the placenta previa. Placenta previa can affect approximately one in 200 pregnancies and can be more likely if the pregnant woman is over 35 years or if it is not their first pregnancy and in women carrying multiples, or underwent previous uterine surgeries, like cesarean section.

The fundal position is the best because it will not get in the way of the labor or delivery process. But placentas covering the cervix can lead to life-threatening complications like bleeding during or before labor and can force the baby into a malpresentation like breech presentation.

Will The Position Of The Placenta Keep Changing?

The position of the placenta keeps changing throughout the pregnancy, either moving upward (as the baby comes down) or rarely downwards if the baby moves to the top. The placenta will take about 50 percent of the area in the uterus during the mid-term of pregnancy. It will take too little space as the baby grows and begins to come down during the later stage.

What Are The Complications Associated With Fundal Placental Position?

The most complicated placental position is called placenta previa. In this condition, the cervix is covered by the placenta during the third trimester of pregnancy. It can lead to severe complications like bleeding, and it requires careful medical attention.

The risk factors for placenta previa are:

Does the Fundal Placenta Position Carry Any Risk?

It is common for women to have a fundal placenta position, and it carries only low-risk. Also, it is important to monitor a fundal placenta as like other placental positions to ensure that the baby is provided with all the support they need, and it is done with routine pregnancy ultrasound.

Which Placenta Position Is Best for Normal Delivery?

Posterior placenta refers to the placenta implanted onto the back of the uterus. The upper portion of the uterine back is one of the best locations for the fetus, and it helps them to move into the anterior position before birth. This position provides an advantage of feeling the baby's movements earlier, and, as said before, it allows the baby to get into the most optimum position, that is, the spine at the top of the belly (anterior) for birth. In addition, the posterior placenta does not interfere with the development of the fetus.

What Does Fundal Mean in Pregnancy?

Fundal height measurement is usually done to determine the baby's height for its gestational age. Generally, the measurement is defined as the distance from the pubic bone to the top of the uterus in centimeters.

Is the Fundal Placenta Normal?

What Determines the Position of the Placenta?

Does the Position of the Placenta Affect Pregnancy?

Usually, the position of the placenta does not affect the fetus or the pregnancy unless the placenta blocks the cervix. This is called placenta previa.

The following factors related to the baby's position can affect the fundal height,
- The position of the baby lying.
- The shape of the tummy muscles.
- Height of the mother.

Is Normal Delivery Possible With the Fundal Placenta?

When the placenta blocks the cervix (placenta previa), it is graded into four categories, from major to minor. In the case of grade 1 or 2, a vaginal birth may be possible, but grade 3 or 4 will require a cesarean section. Despite any grade of placenta previa, you will need to live near or in places where hospitals are easily accessible in case you start bleeding.

There is indeed an extra layer of cushioning when the placenta is positioned toward the front of the body. However, it does not increase the size of the bump.

Can the Placenta Position Change from Anterior to Posterior?

It is common for the placenta to change its position as the uterus stretches and grows. In the case of an anterior placenta, it migrates toward the sides, top, or back of the uterus when the weeks go on.

What Is the Correct Position of the Placenta?

What Is the Best Position for Delivery?

The best position for delivery is the head down, facing the back so that the back of the fetus is towards the front of the tummy. This position is called the occipito-anterior, and it allows them to move more quickly through the pelvis.

Is the Posterior Placenta More Painful?

During pregnancy, a posterior placenta is associated with increased short-term complications such as a longer hospital stay.

Do you have a question on Fundal Placenta or ?