iCliniq / Health Articles / Cesarean Section Advice / Can I Have a Vaginal Birth After a C-Section?
ADVERTISEMENT
Pregnancy and Trying to conceive Data Verified

Is Vaginal Birth Possible after a Caesarean Delivery?

In the earlier days, the norm was 'once a Cesarean, always a Cesarean.' Nowadays, it has changed quite a lot due to the advances in medical science and the awareness of the advantages of normal delivery over Cesarean. 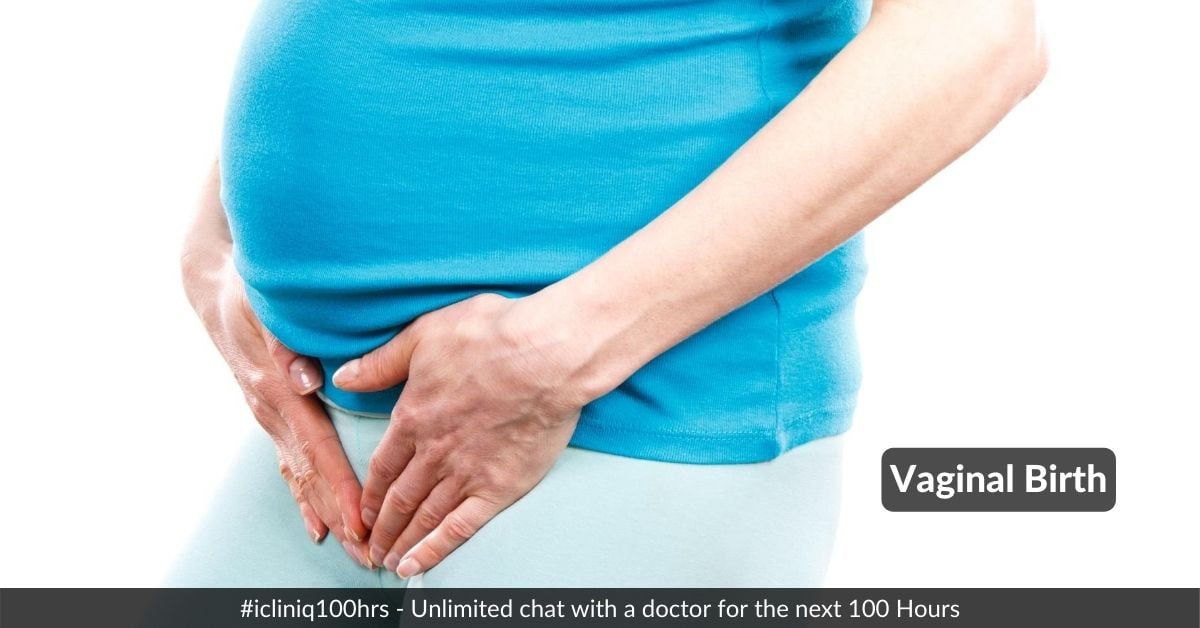 What Is a Vaginal Birth After Cesarean (VBAC)?

Vaginal birth after Cesarean stresses that vaginal delivery is possible even after having a C-section. In Cesarean section, the baby is delivered by making an incision or surgical cut in the belly, which reaches the uterus. The success rate is around 60 to 80% in VBAC. However, few factors decide the success of a vaginal birth following a Cesarean delivery (C-section).

What Is a Trial of Labor After Cesarean (TOLAC)?

A trial of labor is an attempt to deliver vaginally after a C-section. Vaginal birth is tried, and if successful, it results in vaginal birth after delivery. Else, a repeat C-section is done.

Why Is a Trial of Labor After Cesarean Recommended?

How Is VBAC Different From Normal Vaginal Delivery?

Vaginal delivery after C-section is similar to that of normal vaginal delivery, except that in VBAC, continuous monitoring of the baby's heart rate is done to opt for an emergency repeat C-section if needed.

What Factors Determine the Chances of Vaginal Birth After Cesarean?

Of all the above, having had a vaginal delivery after a C-section is an essential indicator that you are eligible for vaginal birth.

Why Is the Type of Incision a Crucial Deciding Factor for VBAC?

A C-section leaves a scar on the abdomen and uterus, which makes the uterus prone to rupture when a vaginal delivery is tried after a C-section. Therefore, the type of incision plays a vital role in deciding the possibility of VBAC.

When Can I Have a Vaginal Birth After Cesarean?

Your chances for a normal delivery after C-section are good if:

When Are My Chances of VBAC Reduced?

Your chances for normal delivery are less if you have the following:

When Is a Vaginal Birth After C-Section Contraindicated?

VBAC (Vaginal Birth After Cesarean) is contraindicated in the following situations:

What Are the Benefits of VBAC?

A vaginal birth following a C-section opens the door for you for future normal deliveries, especially when you plan to have a big family.

What Are the Risks of VBAC?

How Should I Prepare for a Successful VBAC?

Where Should VBAC Be Done?

VBAC must be tried in a center with:

Vaginal delivery is possible after a Cesarean section, but the possibility depends on several factors. Know about the factors contributing to VBAC and stick to the advice of your healthcare professional at all means. However, do not be bothered about the type of delivery. Your ultimate aim is to have a healthy baby and a healthy you, needless of the path you take to get there.

Is It Risky to Have a Natural Delivery After C-Section?

Natural birth after a C-section may result in risky situations like infection, blood loss, and rare complications like uterine scar rupture, which is detrimental to the mother and fetus.

Is It Possible to Have a Natural Delivery After a C-Section?

It is possible to proceed with a natural birth after a C-section if the pregnancy is healthy and the last C-section performed was of a lower transverse type.

How Many Cesarean Deliveries Is a Woman Allowed to Have?

About the complications and weighing on the mother's health, a woman is recommended to have a maximum of three cesarean deliveries.

Does the C-Section Scar Reopen After Some Years?

Opening a C-section scar, also known as C-section dehiscence, is a rare complication of cesarean births accounting for 0.2 % to 1.5 % of transverse incisions and 4 % to 9 % following a classical incision.

How Much Time Does the C-Section Incision Take To Heal?

Each woman’s healing time varies, but usually, it takes about six weeks to recover from a C-section. The horizontal cut made in the lower abdomen can take weeks to heal completely.

How Risky Are Subsequent Pregnancies After C-Section?

In subsequent pregnancies, although carrying certain risks and complications after a C-section, it is advised not to get pregnant within the first six months of cesarean as it increases the risk of complications.

How Is C-Section Better Than Normal Delivery?

Is the C-Section Scar Painful During Subsequent Pregnancies?

What Can Be Done to Evade C-Section?

There are certain things a new mother can do during her pregnancy to avoid a cesarean delivery
- Having long latent phase labor.
- Considering 6 cm dilation as active labor rather than 4 cm.
- Allowing women to push for at least two hours in case of returning mothers and three hours or more for first-time mothers.
- Using assistive methods to aid in vaginal deliveries.
- Avoid putting on excessive weight during pregnancy.
- Childbirth classes during pregnancy.
- Pregnancy exercises.
- Avoid labor induction.
- Delaying epidural.
- Repositioning the fetus in case of breech position during delivery.

How Far in Pregnancy Is Safe for VBAC?

Mothers who have crossed 40 weeks of gestation can safely attempt vaginal birth after C-section (VBAC), albeit with a high risk of failure.

VBACs fail due to prolonged labor. The success rate is high in VBACs when the interval between deliveries is longer with fewer complications. Usually, a gap of 2 to 4 years is considered safe.

How Many Women Give Birth by VBAC After C-Section?

Are VBACs Considered High-Risk in Pregnancies?

VBACs are considered safe, with a scarce chance of complications if the planned interval between deliveries is more than two years.

How Safe Is Natural Birth After C-Section?

Natural births are considered safe in subsequent pregnancies after C-section, in the case of uncomplicated pregnancies with an interval of more than two years.

In Which Cases, Is VBAC Contraindicated?

A mother is ineligible for VBACs in case of complicated pregnancies and a history of high vertical incisions.

I was informed that my baby's head is not yet fixed for normal delivery. Please explain.

Query: Hi doctor, I am 26 years old, and this is my first pregnancy. I am in my 39th week, and my due date is by next week. When I consulted my doctor, she said that the baby is healthy, and the head is in down position only, but the head did not fix yet. She asked me to wait till due date and then she sug...  Read Full »

What are the chances of normal delivery after cervical cerclage?

Query: Hi doctor, My wife had cervical cerclage at 20 weeks of pregnancy. Now, she is at almost 38 weeks and the doctor is resisting the removal of cerclage. Last time the cervical length measured at 24th week was 37 mm. We suspect that she is doing this to encourage C-section delivery. Should we get a s...  Read Full »

When to resume normal sex life after a C-section delivery?

Query: Hi doctor, I have undergone a cesarean section for delivery of my baby two months ago. I need some guidance. Is it fine to continue my normal sex life from now onwards? What kind of precautions should be taken into consideration? Is it required to take any medicine to avoid pregnancy? Perhaps the c...  Read Full »

Urinating during sex - Causes | Ways to Avoid It

Do you have a question on Cesarean Section Advice or C-section?