iCliniq / Answers / Obstetrics and Gynaecology / Abortion / What is the procedure for abortion at 6 weeks?
ADVERTISEMENT

Q. What are the abortion options during 6 weeks of pregnancy?

Answered by
Dr. Sameer Kumar
and medically reviewed by iCliniq medical review team.
This is a premium question & answer published on May 14, 2018 and last reviewed on: Jun 20, 2019 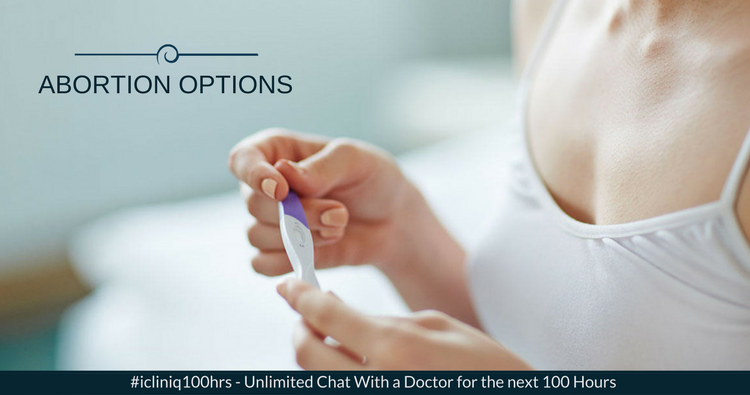 I would like to get a summary of abortion options for someone 6 weeks pregnant. Please explain the risk statistics as in what percentage the patient have risks and what type of patients they typically are. The woman in question is an otherwise healthy 21 year old.

For someone who is 6 weeks or 42 days pregnant as per the ultrasound and the pregnancy has been localized intrauterine, there are actually two options:

In medical abortion the patient is given a set of medicines namely Mifepristone and Misoprostol in a set protocol.

The aim is to disallow further growth of pregnancy by stopping the cytotrophoblastic invasion into the endometrium (through Mifepristone) and then initiating uterine contractions and placental separation (through Misoprostol). The procedure for drug protocol lasts till max 2000 mcg of Misoprostol has been given in a set protocol till the pregnancy has been aborted.

The success rates are 93%-96%, but the disadvantage is that it may lead to prolong bleeding for up to two weeks before all the products of conception can be actually aborted. Sometimes, the bleeding just continues for long and one may have to resort to surgical curettage to remove the remaining decidua in utero.

2. Surgical evacuation with suction and evacuation.

Surgical evacuation is a day care procedure where a suction canal is introduced inside the uterus through the cervix, with patient under anesthesia or a paracervical block and the products of conception are suctioned out completely.

If the procedure is ultrasound guided, then the success rates are 100 percent and major advantage is, one can leave for work after 6 hours (till the anesthesia effect passes of if general anesthesia or after 2 hours in case of post paracervical block).

The remote chances of Asherman syndrome or intrauterine adhesions have been documented in 1% of women who underwent surgical evacuation where adhesions were formed inside the uterus leading to secondary infertility. But, a controlled, ultrasound guided dilation and curettage under an experienced hand is safe.

I would suggest her to opt for medical abortion if the pregnancy is unplanned or accidental as this would be a natural way of aborting and moreover pregnancy being less than 7 weeks, can be easily aborted.

A repeat ultrasound pelvis to check for completion of abortion shall be necessary after the procedure is undertaken. The mild bleeding and discharge may or may not continue for long, it depends from woman to woman.

If this fails, then of course you have a surgical option to look at. Pregnancy should be completely avoided for the next four months of post procedure as that is the time required by uterus and pelvic organs to return back to their pre-pregnant state.

How long have these protocols (both medical and surgical) been a standard practice? How many of such procedures would a typical (mid-career) gynecology attending would have under their belt? What level of experience would you in general qualify as an experienced hand in this context?

These protocols have been in practice since last 20 years now where the medical protocol has been practiced since last 15 years and safely with good results. A gynecologist is supposed to perform minimum 50 dilation and curettage during his or her training period before a degree is awarded to him or her. Hence, they are competent and licensed to undertake such procedures.

The skill depends from person to person, but this has been the commonest and most frequent procedure which is being practiced in a gynecology clinic. This is not followed only for abortions, but for surgical curettages for menorrhagia and also as diagnostic and therapeutic curettages for histopathological analysis as well. So, somebody who has a minimum two to five years of practice would indeed be a safe from a patient's point of view.

Related Questions:
Can Mifepristone and Misoprostol be taken for abortion after 49 days of pregnancy?


So we consulted a doctor for an abortion and she prescribed Mifepristone and Misoprostol for the abortion ... But safety profile says, until seven weeks these pills ...   Read full

What are the uses of Misoprostol?


It is used for abortion when the gestation is only few months, that is less than 7 weeks, along with another drug called Mifepristone ...   Read full

Would papaya and long distance travel result in abortion?


.. are medical methods available which could be availed under a doctor's supervision only. This is an abortion kit containing one Mifegest (Mifepristone) tablet 200 mg to be taken orally and 4 Misoprostol 200 mcg to be inserted per vagina after 48...   Read full