Trachoma is a severe infectious follicular conjunctivitis frequently seen in developing countries. It is known to affect children in the age groups of 5 to 10 years, with complications starting by 20 to 30 years. In severe cases, it is known to cause a variety of eyelid malformations by its tendency to produce scarring. It is a major public health problem and deserves attention from both the common man in terms of preventive measures to be taken and hygienic practices to be followed and also city planners and executives as sanitation and hygiene are the major factors responsible for this disease. 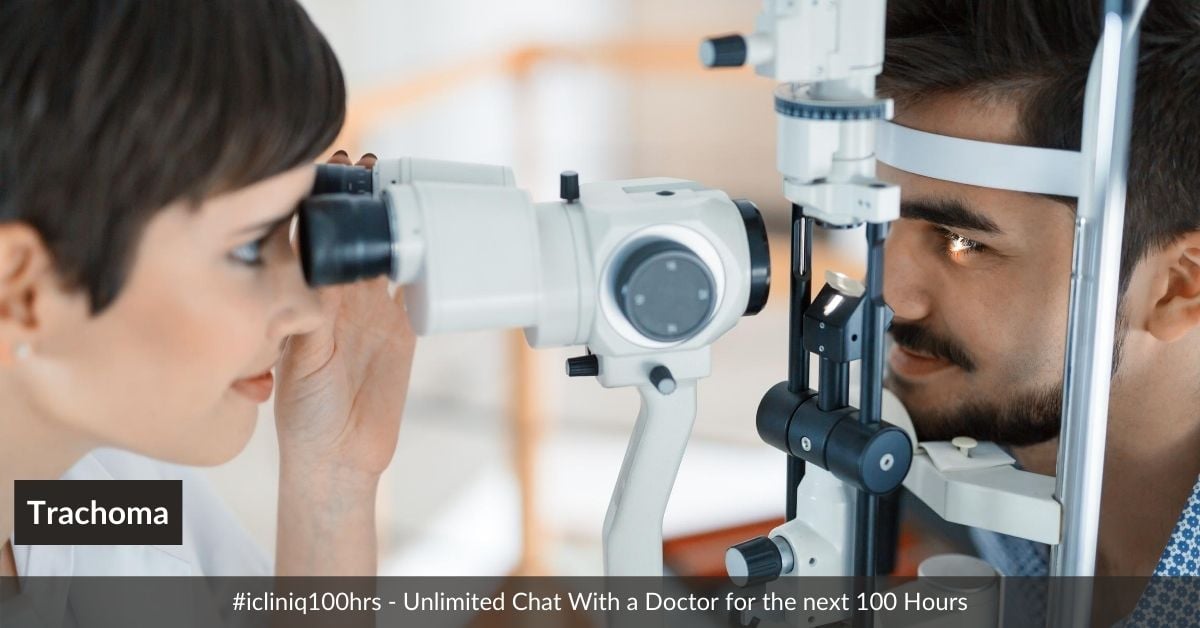 Trachoma is a severe infectious follicular conjunctivitis frequently seen in developing countries. It is known to affect children in the age groups of 5 to 10 years, with complications starting by 20 to 30 years. In severe cases, it is known to cause a variety of eyelid malformations by its tendency to produce scarring. It is a major public health problem and deserves attention from both the common man in terms of preventive measures to be taken and hygienic practices to be followed and also city planners and executives as sanitation and hygiene are the major factors responsible for this disease.

Trachoma is caused by Chlamydia trachomatis, a bacteria that is gram negative with a life cycle tailormade to evade our natural immune defense mechanisms. The infective form of this organism called an elementary body is an inert, tough protective shell harboring the infectious organism. Through this form, chlamydiae are capable of surviving extreme conditions that would generally instantly kill the organism. The elementary body after gaining entry into our body infects our bodily cells by a process called endocytosis, wherein it coats itself with the cells' own coating and starts multiplying inside. During this whole process, the organisms are protected from our immune protective mechanisms through a variety of countermeasures by the organism. Once inside the cell, the elementary body becomes active and transforms into a reticular body and starts multiplying within the host cell until the host cell can no longer sustain the rate of multiplication of these infectious bodies. The reticular bodies once again transform into elementary bodies before rupturing the host cell and moving on to infect another cell and continue the same cycle all over again.

The Main Mode of Spread

What could be the reason for blurred vision following a hit on the eye?
I got conjunctivitis 7 days back.I had red eye with eyelid swelling.Now redness is gone but blurring is present.What do I do?
I got urethritis and conjunctivitis after unprotected oral sex. Please help.

a. Follicles - these are the proliferation of lymphoid cells as an immune reaction to the spread of the chlamydia. This is the earliest and most characteristic sign. At this stage, the disease can be easily reversed and will not cause any permanent damage to the patient’s eye.

b. Severe inflammation - the eye becomes red and starts to water. This is also a feature seen in early disease and should raise an alarm that the condition needs to be urgently treated.

a. Scarring - in this stage, the inflamed and reactive tissues have been replaced by scar or dead tissues. This indicates a stage of irreversibility and the tissue once scarred does not regain its normal elasticity and function. The scarred tissue is relatively rigid and non-malleable and gives rise to complications of the lid such as inward turning of eyelid margins.

b. Trichiasis - in more severe forms of scarring, the inward-turned eyelashes will rub against the cornea, grating it to cause erosions and ulcers. These ulcers and erosions, if not treated properly, will lead to the formation of permanent corneal opacification, thus blinding the patient for life. The only cure for such a blindness is by surgery and the outcomes of the surgery are not 100 % good, that is, not all patients improve with surgery.

Medical measures used for treatment include both drugs and surgeries.

The best drug for trachoma in early stages is Azithromycin, but Gentamycin can also be used. Surgery is reserved for complications such as trichiasis which needs bilamellar tarsal rotation and corneal opacification

The disease of trachoma is an easily preventable one and can be avoided by the following measures.

This disease is seen in most parts of the world, it is common among the poor and uncared. A few measures of personal hygiene and respect for our environment can go a long way in preventing this transmissible cause of blindness.

Query: Hi doctor, My girlfriend had some irritation in her eye. So, we went to the doctor, who said she has a parasite in her eye. After reading about it on the internet, I am worried that she might go blind. It is a very new relationship, so I wanted to know if it is contagious?  Read Full »

I have frequent eye infection with pus and blood discharge. Please help.

Query: Hello doctor, Since last 7 to 8 months I am having an eye infection, like a stye. It is getting frequent almost after every 3 to 4 weeks. I recollect having collided with somebody about one and half years back, hurt on my right eye with somebody's elbow and had a swollen eye, very painful and under...  Read Full »

Do you have a question on Eyelid Swelling or Eye Infection?