What Is Period or Menstruation Acne?

A flare-up of pimples every month that coincides with menstruation is known as menstrual acne, and it is relatively common. Sometimes, it gets stubborn and does not go away, and may need treatment. Please read the article to know more in detail. 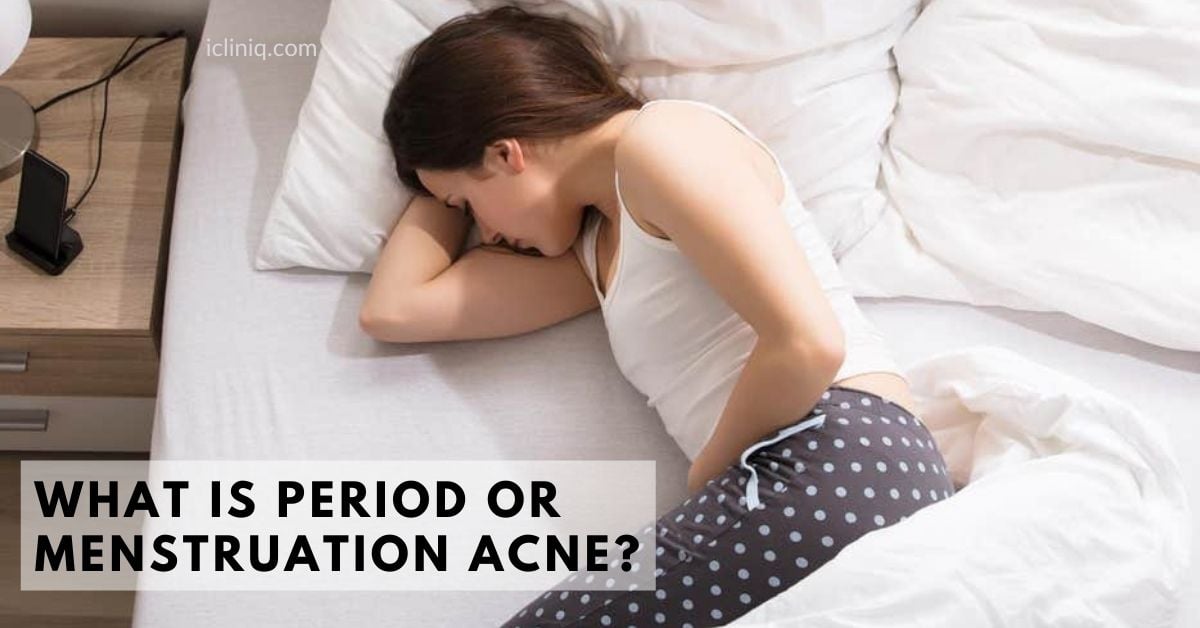 Menstruation has many discomforts, such as feeling bloated, getting cramps, having occasional mood swings, etc. In addition to these, some women experience another side effect which is called a period or menstrual acne. It has been found that around 65 % of women reported worsening of their acne during their periods. Similar to the above-mentioned side effects, period acne can also be managed with the help of some proper medical advice.

How to Identify Menstrual Acne?

It is important for a woman to know if she is really having menstrual acne or any other kind of blemishes. Also, menstrual acne itself has two kinds – a regular one and a hormonal breakout. The easiest way to identify is to check for the exact timing of the occurrence.

Period acne begins to appear mainly during the week when you are about to start your period, and, in some women, it appears during their period. Similarly, in most cases, they begin to clear or tend to improve once you finish your period. For women who already have acne, it might start to worsen during this period.

Why Does Acne Increase Before Periods?

The simple reason behind the question of why acne increases before or during periods are the hormone levels. It is a known fact that the level of hormones in our body fluctuates through various stages of the menstrual cycle. So, just before the period begins, the level of estrogen and progesterone hormones begin to drop down from the normal range. This, in turn, leads to the excess secretion of an oily substance that lubricates the skin called the sebum, produced by the sebaceous gland. When the level of sebum becomes more than the required level, it leads to clogged pores and results in other forms of breakouts.

Why Does Period Acne Last Even After Periods?

In some women, period acnes tend to improve or clear out after periods just like other PMS (premenstrual syndrome) symptoms. But on the other hand, there are cases where this acne does not improve even after the period gets over. This is also due to hormones.

The main reason behind this is a hormone called testosterone. Testosterone is a male hormone that can be found in all bodies irrespective of birth sex. This hormone tends to react differently based on the level of other hormones in our body, such as estrogen or progesterone. So, when the period is about to end or has ended, this again leads to fluctuation of hormone levels. During this period, the testosterone fluctuation will trigger the secretion of sebum and again results in clogged pores and other breakouts. And the cycle repeats again for each period.

What Are the Signs of Period Acne?

As mentioned earlier, period acnes are quite different from normal acne. There are certain signs that are associated with period acne, such as,

How to Manage Period Acne??

There are several methods that are used to handle an active case of period acne. Also, some over-the-counter medicines help in speeding up the healing process. Some of the routines that help in taking care of the acne are,

Some of the other helpful measures that can be taken are,

How to Prepare for Next Period Acne Before the Menstrual Cycle?

There are certain steps that can help in preparing you before encountering period acne, that is, before your next period cycle. Some of them are,

It has been observed that having proper regulation of blood sugar levels by consuming low glycemic index foods helps prevent hormonal or period acne. Hence, avoid foods that have a high glycemic index, such as,

These foods have been shown to cause inflammation which also causes acne.

The same products used during an active acne breakout also help in preventing the next ones. Some products which contain alpha-hydroxy acids, such as Lactic acid and Glycolic acid, help in removing the dead skin cells. They also help in preventing clogging of pores. Also, products which contain Salicylic acid are also effective against acne and are available as over-the-counter medicine without any prescription.

If the menstrual acne has no improvement even after using over-the-counter medications and home treatment methods after three cycles, then it is important to reach out to your dermatologist. Upon physical examination and getting to know about the history of acne, your doctor might use any one or combination of the following.

Zits and pimples are very common for both men and women. They tend to be more frequent during the adolescent stage and in the early twenties. Not all acne is related to hormonal changes and imbalances, but for women with some noticeable signs mentioned above, it is easy to identify period acne. In the majority of the cases, the period acne goes away on its own or after using over-the-counter medications. If it continues to be stubborn, then reach out to your doctor to plan your best course of action.

How Do I Stop Period Acne?

Period acne could be avoided by washing the face twice a day using gentle or soap-free cleansers. In order to reduce inflammation, use glycolic acid pads, which also helps to remove dead skin cells and promotes the growth of new skin. In addition, consider using 2.5% of Benzoyl Peroxide spot treatment in the beginning.

How Long Does Period Acne Last?

It is normal for acne-prone women to experience premenstrual breakouts. The period acne usually strikes and lasts for about 10 days before the onset of the period, and they will subside as soon the period starts.

Is It Normal to Have Breakouts during the Period?

Where Does Period Acne Show Up?

Period acne shows to be as red and inflamed papules, and they rarely develop as a white head. This period acne appears mainly on the lower part of the face, such as:
- Cheeks.
- Jawline.
- Chin.
- Neck.

Why Do I Look Prettier on My Period?

The estrogen hormone will be at its peak during the days before the woman's period, and at the time of ovulation, these hormones make the skin cells result in a clear, glowing complexion. At the time of period, estrogen stimulates an inner glow and keeps testosterone levels at a point where the pores start to shrink.

Does Hormonal Acne Go Away?

Hormonal acne could be differentiated according to its severity from mild to severe. In the case of mild hormonal acne, no medication is needed, and it gets resolved by itself. Mild hormonal acne appears as a non-painful blackhead and whitehead that occur in smaller outbreaks.

How Do I Know if My Acne Is Hormonal or Bacterial?

Acne could be differentiated as hormonal or bacterial based on the location and size of the acne. When the acne appears around the jawline, it is definitely hormonal acne. If there are pimples and whiteheads of varying sizes, it is bacterial acne.

Period acne appears to be as inflamed, red, raised bumps that rarely develop into pus-filled pustules. They are very frustrating but avoid squeezing them.

What Foods Help To Get Rid of Hormonal Acne?

What Gets Rid of Hormonal Acne Fast?

To get rid of hormonal acne, follow the tips below:
- Wash your face twice a day (morning and evening).
- Apply prescribed acne products. Do not apply too much and dry the skin; it may increase irritation.
- Wear sunscreen every day.
- Use non-comedogenic products to avoid clogging of pores.

How to reduce acne and acne scars?

Query: Hi doctor,Please tell me how to reduce acne and acne scars. I am 23 years old. I have oily skin and get acne every month one week before my periods for a year. My acne is a mild and not severe one. I have tried so much but cannot get over it. I drink lots of water, do not have any digestion issues, ...  Read Full »

What causes acne when we were on our period?

Query: Hi doctor,What is happening within our body that causes the most stubborn acne when we were on our period? What is the difference between the acne we get while on our period versus off? What are the best ways (besides specific products) to treat acne specifically during that time?  Read Full »

Article Overview: Acne is a skin condition caused by obstruction of the follicles with oil and dead skin. It presents as whiteheads, blackheads and pimples, among teenagers commonly. Read Article

Introduction: Clear skin is an obsession for almost everyone. Many cosmetic procedures are available to provide clear and acne-free skin. We all would have come across various advertisements for products aiming to provide acne-free, smooth skin in our day-to-day life. But what is this acne all abou...  Read Article

Do you have a question on Period Acne or Menstruation Acne?