iCliniq / Answers / Otolaryngology (E.N.T) / Sore Throat / What is the reason for sore throat and difficulty in speaking for the past two and half months?
ADVERTISEMENT
ADVERTISEMENT

Q. I am a singer. I have sore throat and unable to sing or even speak normally. Please advice.

Answered by
Dr. Deepti Singh
and medically reviewed by iCliniq medical review team.
This is a premium question & answer published on Jul 19, 2017 and last reviewed on: Aug 05, 2022 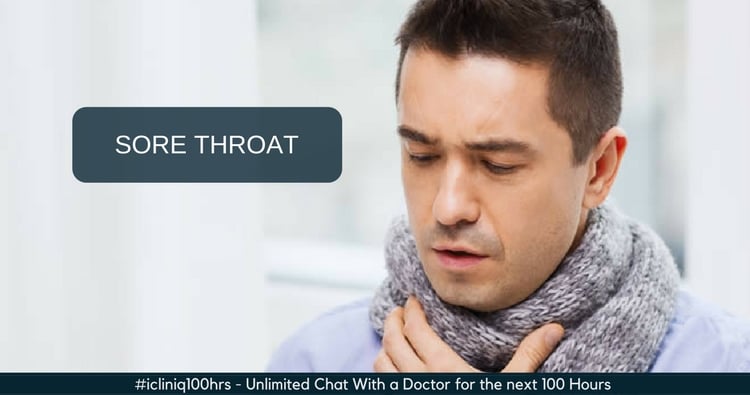 I am a 21 year old male and I have been suffering from sore throat for 2 and a half months now. It all started in late December. I am a singer, and I came down with a very light cold. Due to the weather, I had a light sore throat. During this time, I had to sing and speak loudly with friends, as it was the holidays. While the other symptoms shortly subsided, my throat has been raw ever since and it has left me unable to sing or even speak normally.

During my initial medical visit, I was given a week's worth of Amoxicillin, which had no effect. A month or so later, I decided to visit my ENT specialist. He conducted a nasal/sinus and throat exam and noted my deviated nasal septum and "turbinate hypertrophy" in my nose. As for my throat, he noted no signs of nodules but "mild erythema of interarytenoid mucosa around the larynx". Basically, he told me to try Prilosec and steroid sprays. Well, I am pretty young, very thin, and have no real history of reflux but I took the Prilosec (Omeprazole) for a few days, I noticed no effect except for constipation. When I stopped the Prilosec, the constipation went away. I then resumed it for an additional two days and the constipation returned, so I quit altogether. The steroid sprays and Claritin did indeed helped clear my nose somewhat, but it had no effect on my throat. Next, in frustration, I returned to my family doctor and this time asked him if a steroid might do the trick. He prescribed 2.5mg of Prednisolone to be taken twice daily for 5 days. It is coming up on day 4 now, and sadly, I cannot say I have noticed any change. I am kind of at a loss for what to do. My family doctor says I probably just irritated my throat, but 3 months in, I am desperate to resume singing and speaking normally. My voice is a quiet, weak thing now and it hurts to carry on conversation for longer than a minute or so. Lower pitches are the most comfortable for me to speak in, anything else and I feel air hitting the back of my throat and a sandpapery feeling that is very uncomfortable. I am really frustrated here. I am going to request a throat culture this week, but apart from that, I really do not know what to do.

Welcome to icliniq.com. I can understand your concern.

Consult an ENT otolaryngologist online for further follow up --> https://www.icliniq.com/ask-a-doctor-online/ENT-Otolaryngologist

Thank you for the quick response doctor.

Does the voice rest mean complete silence? Or am I allowed to speak somewhat? I have not tried singing for the past one month. Isn't that enough?

Related Questions:
What medicines can I take for throat irritation post LASIK surgery?


I have throat irritation and slight nose block for which I took Otrivin at night for 2 days but still not much improvement ...   Read full

Nothing seems to help my prolonged throat irritation. Please advise.


I have a throat irritation for the past three years ... I went to the best hospitals in my city and consulted ENT physicians there, who told me that my throat was alright ...   Read full

Why am I having serious sleep paralysis with shortness of breath?


.. as your bronchitis is concerned, I advise my patients to avoid smoking and take steam inhalation twice a day. I also advise syrup Phensedyl BR (Ambroxol and Guaifenesin) 2.5 ml twice a day for five days and tablet Allegra M one tablet at night for...   Read full