Pterygium remains the most notorious of eye ailments due to its propensity for recurrences. This article highlights the causes, prevention, and treatment options for this ophthalmic enigma. 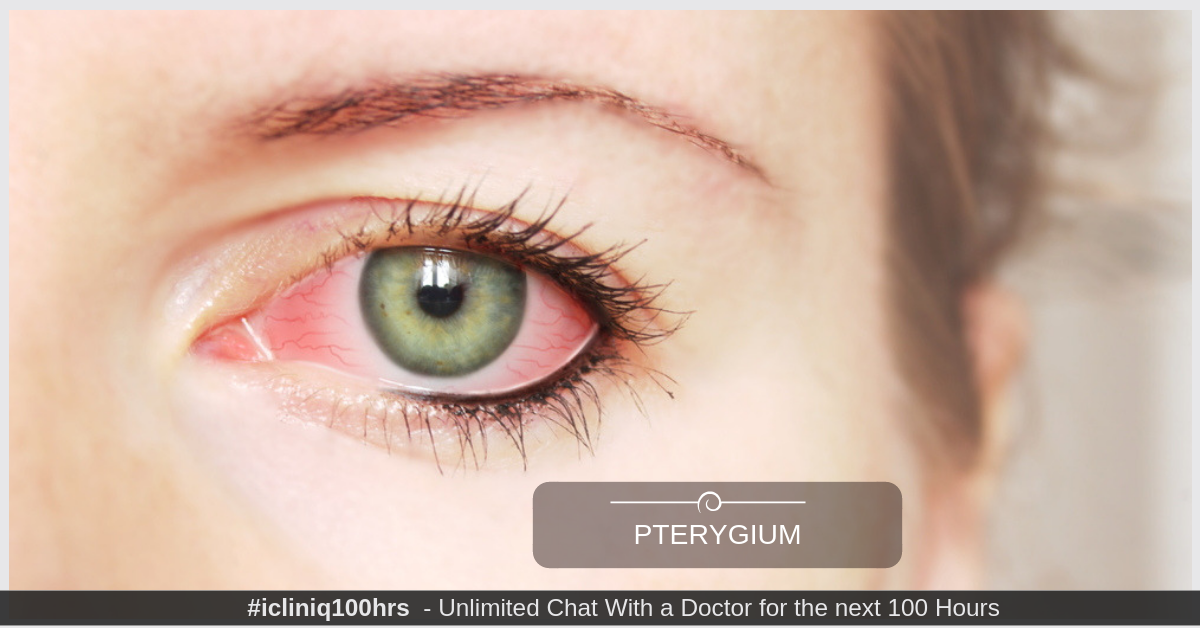 Pterygium or surfer's eye is a triangular, fleshy mass of conjunctiva that also involves the cornea. Pterygium derives its etymological origin from the Greek word 'pterygion,' meaning small wing. In ophthalmic jargon, it is described as a triangular, wing-like fibro-vascular encroachment of degenerative sub-epithelial conjunctiva, straddling the limbus onto the cornea.

Pterygium is a common disorder in many parts of the world, with reported prevalence rates ranging from 0.3 % to 29 %. What makes this seemingly trivial lesion gain so much popularity in ophthalmic circles is its notoriety for recurrences.

Studies suggest an association with chronic exposure to ultraviolet B radiations. Localized limbal stem cell anomalies, human papillomavirus (HPV) infection, p53 gene mutations, and imbalance of matrix metalloproteinases (MMP) and tissue inhibitors of metalloproteinases (TIMP) have been strongly implicated in pterygium causation. These recent insights into the etiopathogenesis of pterygium help us in deciding the management strategies.

What Are the Signs and Symptoms of Pterygium (Surfer's Eye)?

Surfer's eye does not always cause symptoms. If symptoms are seen, they are mild. Some of the common symptoms include:

If the pterygium grows larger and covers the cornea, it can interfere with vision.

How Is Pterygium Diagnosed?

Though all aspects of pterygium still remain an enigma, they do not pose practical problems. It can be diagnosed with certainty whenever encountered. A probe test can easily differentiate it from pseudo-pterygium, its chief differential. And cytopathological evaluation by conjunctival impression cytology (CIC) differentiates it from conjunctival intraepithelial neoplasia (CIN). The other diagnostic tests recommended include:

In this test, the patient is asked to read the letters on an eye chart.

Related Topics
I am having little veins and yellow color due to pterygium. Please advise.
Tips to Prevent Childhood Obesity
Tips To Prevent Iron Deficiency Anemia In Children

This test is used to measure the curvature changes in the cornea.

What Are the Indications for Surgery?

Similarly, treatment is not a practical problem due to the easy availability of a plethora and simple, time-efficient surgical options. Indications for surgery to treat pterygium include;

What Are the Recurrence Prevention Measures?

In view of the high recurrence rate of the bare sclera technique, various adjunctive measures such as medical methods, beta-irradiation, and surgical methods have been advocated to prevent recurrence of the disease.

Mitomycin C has been used effectively in preventing recurrences of pterygium. It can be used either intraoperatively (carried out in the course of surgery) as sponges applied to the scleral bed after pterygium excision or postoperatively (done after a surgical operation) as topical drops.

Mitomycin C in concentrations of 0.01 % - 0.04 % is used intraoperatively. Most surgeons recommend a concentration of 0.02 % applied for 3 minutes.

Studies suggest that 0.02 % to 0.04 % intraoperative Mitomycin C for three minutes is less effective than a five-minute application. But increasing the duration and concentration may lead to a higher risk of complications such as scleral perforations, scleritis, scleral necrosis, and endophthalmitis.

Postoperative Mitomycin C eye drops have also been shown to be effective, with 0.02 % being the commonest concentration used in q.i.d. dosage for 5 to 14 days (concentrations used range from (0.005 % to 0.04 %). Studies concluded that Mitomycin C post-operatively for a shorter duration (7 days vs. 14 days) is equally efficacious with lesser complications.

Intraoperative Doxorubicin (0.02 % for 3 minutes), Daunorubicin (0.02 %), Cyclosporine A (1 %) eye-drops, Thiotepa (0.05 %) eye-drops and 5-fluoro-uracil (5 % for 5 minutes intra-operatively and 1 mg to 3 mg intralesional injections into recurrent pterygia) are the other medical options shown to have promising results in recurrence prevention in various studies. Off-late, subconjunctival anti-VEGF Bevacizumab (1.25 mg to 2 mg) therapy has also been proposed for the aforesaid.

Regimes of beta-irradiation advocated for recurrence prevention are:

It has a higher recurrence rate than post-operative Mitomycin C eye drops.

The standard technique is a strontium (Sr90) brachytherapy with an epibulbar plaque which has a central radioactive disk and inactive rim of 2 mm.

The following surgical options are currently available with varying success and recurrence rates:

Pterygium recurrence is still quite rampant. As such, preventive measures like avoiding exposure to ultraviolet radiations, dust, smoke, and pollutants, maintaining adequate eye hygiene and nutrition, and using lubricant eye drops form a major part of eradicating this disorder. After all, prevention is always better than cure.

The causes for pterygium are:
- Excessive exposure to ultraviolet light.
- Warm environment for long periods of time.
- Allergic reactions to pollen, wind, sand, and smoke.

What Is the Time Duration for the Occurrence of Pterygium?

For the pterygium to heal completely, it will take approximately two or more weeks to go away. In some cases, it might also take up to one month. The common problem associated with pterygium is its tendency for recurrence.

Is It Possible to Shrink Pterygium?

How Can You Prevent the Recurrence of Pterygium?

Can Pterygium Result in the Condition of Astigmatism?

Astigmatism is a condition in which the curvature of the eyes is altered. The patient will suffer from the blurry vision in astigmatism. Due to pterygium, a certain degree of astigmatism can occur due to pterygium involvement in the carnival region.

Is Surfer's Eye a Contagious Disease?

Surfer's eye is a non-contagious condition. The condition cannot spread from one person to another either by direct or indirect contact. Touching the objects used by the patient will not cause the infection.

Can Pterygium Result in Blindness?

It is true that pterygium can result in blurry vision. The vision gets disturbed only in moderate cases of pterygium. If the condition is left untreated, scarring of the cornea can occur that might result in blindness. It is necessary to get treatment for pterygium as soon as possible.

Can You Drive After Pterygium Surgery?

You cannot drive after pterygium surgery. A patient can get completely normal only after two to three weeks. You are recommended to refrain from driving and reading books. You can get help from others to drive you home after the completion of pterygium surgery.

What Should Not Be Done After Pterygium Surgery?

Is It Possible for a Pterygium to Get Healed on Its Own?

Pterygium cannot be healed on its own. You can use ointment drops and medications to overcome the condition. In severe cases, a pterygium can be treated with the help of laser surgery.

What Are the Treatment Options for Pterygium?

Pterygium can be treated with the following medications and treatment options.
- Over-the-counter ointments can be given to the eyes.
- The redness of the eyes can be cleared with eye drops.
- Drops containing steroids can relieve pain and swelling.

Should Pterygium Be Removed Surgically?

It is possible to treat pterygium without surgical help. As the eye is a sensitive organ, non-surgical methods are tried initially. If the non-surgical treatment methods are unsuccessful, then the patient is recommended for surgical options.

Pterygium surgery is not very painful. Patients are given local anesthesia during this surgery. This anesthesia will provide numbness to the eye site, and the patient does not feel any pain during this procedure. However, there might be some discomforts after the surgery.

Can Lasers Help in the Removal of Pterygium?

Yes, a pterygium can be removed with the help of laser surgery. Lasers are less invasive procedures and do not cause extensive bleeding. It is necessary to consult your doctor to discuss ideal treatment options.

Article Overview: There are certain chemicals and drugs that induce photosensitivity, which mimic other skin diseases. The basic knowledge about this is essential to eliminate the illness. Read Article

Are there any drops that can heal a pterygium?

Query: Hello doctor,I am suffering from pterygium from last two years. I feel a burning sensation and redness in my eyes the whole day, currently using rose water as suggested by an Ayurvedic doctor. Is there any drops which heal it permanently without surgery? I found one online. Could you please suggest ...  Read Full »

Article Overview: Itching is an irritating sensation that makes a person scratch his skin. In this article, I have discussed various causes, types, and management of itching. Read Article

What Is Itching? Pruritus (itching) is the predominant symptom of inflammatory skin disease. It lacks a precise definition and can best be defined indirectly as a sensation that leads to a desire to scratch. What Are the Causes of Itching? Itching can occur as a symptom of many health conditions. Th...  Read Article

Do you have a question on Pterygium or Matrix Metalloproteinases?