Do you have small skin-colored growths on your face? They could be skin tags. Check out ways to identify and treat this annoying skin condition. 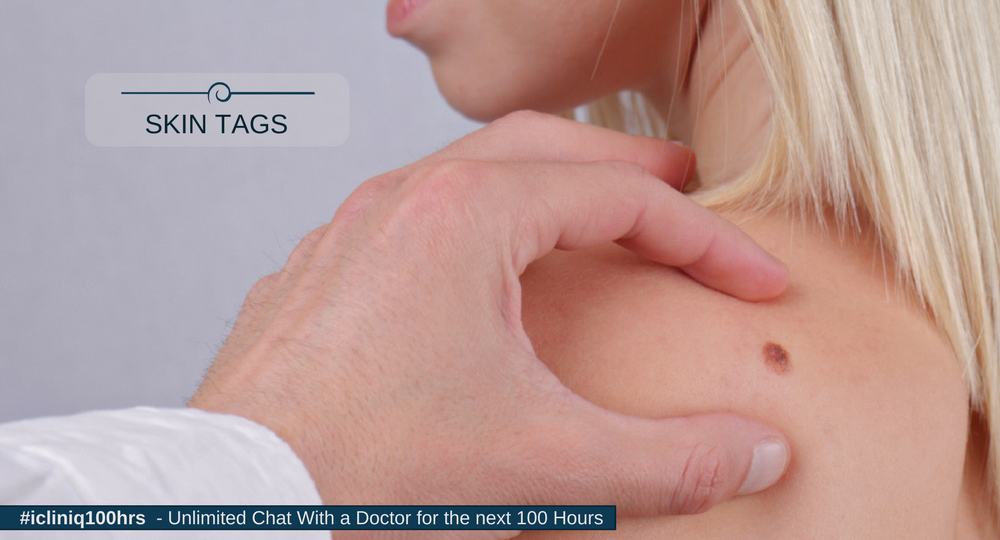 Skin tags are small, soft, skin-colored growths that hang from the skin and resemble warts. It is very common and need not be worried. There are many treatments available for esthetic purposes. It does not cause any discomfort in most of the patients.

What Are the Skin Tags?

The skin tag is an outgrowth of the skin. It is made up of collagen and blood vessels. The skin tag is covered by the skin. They are painless. Almost everyone might have seen a skin tag, but they might not have known the medical term for it. The skin tag is technically called acrochordon. It might have a stalk most of the time. In a few cases, it might be pedunculated too. They have a high possibility of occurring in the folds of the skin and the creases. It is hard to predict how many days it will last. The skin tag that has been thrombosed could change its color to purple or black. After the skin tag has lost its supply, they might fall off in a week.

Although the exact reason for their appearance is unknown, they are thought to be associated with the following:

What Are the Signs and symptoms?

Skin tags cause any pain or other symptoms.

What Are Risk Factors?

You are more prone to developing skin tags if you:

Its appearance is highly variable, but it is often skin-colored and, at times, gets darker due to pigmentation. It usually hangs from a stalk (base). The size varies from 1 mm to 5 cm. The texture is frequently soft and fleshy, but the bigger skin tags may be wrinkly.

A visual examination by a dermatologist is usually sufficient to differentiate it from a wart or a mole. In some cases, a biopsy may be ordered by the doctor if he or she wants to rule out other skin conditions.

Is Skin Tag a Tumor?

It is a harmless, benign tumor. Generally, it is not cancerous. They do not increase the risk of cancer either.

If there is a need to get them removed, that would be a safe option. Removing them does not cause them to spread or reappear. People who are prone to it, new ones can appear at different sites for them at any point irrespective of whether you get the existing ones removed or not.

Generally, no treatment is required unless it is bothersome or poses a cosmetic issue. Treatment options include:

Home Remedies:Apple cider vinegar is known to be helpful in the treatment of skin tags. It can be soaked in a cotton ball and placed over it. Bandages are placed for holding the cotton tight. It is removed after 15 minutes. Later, it is cleaned with water.

Cryotherapy: It is a method that uses liquid nitrogen for the treatment of skin tags. The tags in the skin are made to stop its growth by freezing in a particular area. This treatment method is known to be very harmless and easy to proceed. The results are also known to be better when compared to the other methods because it does not cause any recurrence. The destruction of the skin tag occurs in a controlled manner.

Electrosurgery: Electrosurgery uses the application of high-frequency waves. Here, electric currents are used to cut the biological tissues. The advantage of this method is that it restricts the amount of blood loss in the patients during the removal of skin tags. It has good properties of contributing to surgical procedures in all the departments of medicine. The disadvantage of electrosurgery is that it can cause sudden and sharp pain during the procedure. If the skin tag is small, the patient is advised to bear the pain during the electrical stimulation. This process of removing the skin tag by burning is known as cauterization.

Ligation: It is a procedure in which a ligature is tied tightly to the blood vessel. There are different types of ligation. They are chemical ligation, tubal ligation, rubber-band ligation, and others. Rubber-band ligation is used for removing skin tags. In this procedure, a small band is placed on the base of the skin. It later cuts out the blood supply leading to the fall off.

It is not advised to use nail cutters or clippers to remove the tag. It will result in intensive bleeding and scarring. Keeping all the folds of the skin clean might help you stay away from these problems. If any particular clothing or jewelry affects the skin, then it is necessary to avoid it. Skin tags on the eyelids are the most dangerous ones and need proper treatment.

If you have any queries, call a doctor online.

Acrochordon or a skin tag is a small benign growth that is soft and hangs from the skin. It is attached to the skin through a peduncle or stalk. They are commonly found in the body parts where the skin rubs against skin or clothing, but it can occur anywhere.

How To Remove Skin Tags?

The following are the treatment options for skin tags:
Home remedies - You can apply tea tree oil, banana peel, apple cider vinegar, or garlic on the skin tag for a couple of weeks at night until the tag shrinks and falls off.
Surgery - A doctor can cut the skin tags off with a surgical scissor or with the help of cauterization or cryosurgery.

The cause is still not known, but a skin tag occurs when collagen and blood vessels are trapped under the skin. They are more commonly seen in the skin folds, where the skin rubs against each other. Some of the risk factors for skin tags are obesity, diabetes, pregnancy, HPV infection, hormonal imbalance, hyperinsulinemia, and family history.

How To Remove Skin Tags At Home?

Many skin tag removal kits are commercially available. The main aim of these treatments is to cut off the blood supply to the skin tag, which shrinks and dries them out and they fall off. This can be achieved in the following ways:
- Tying dental floss at the peduncle or stalk of the skin tag.
- Applying skin tag removal creams.
- Freezing it with liquid nitrogen.
- Applying tea tree oil, banana peel, apple cider vinegar, or garlic on the skin tag for a couple of weeks at night.

How To Prevent Skin Tags?

Some tips to prevent skin tags are:
- Consume a diet low in calories and saturated fats.
- Do exercise regularly for at least 30 minutes daily.
- Keep the skin fold dry and apply powder to prevent friction.
- Do not wear tight clothes. Instead, wear cotton and breathable fabrics.

No, skin tags are harmless and not a sign of cancer. They are just benign growth of skin and do not increase your chances of cancer in any way.

How Do I Know If Its A Skin Tag?

Skin tags appear as small, soft, painless growths on the eyelids, armpits, neck, and groin. They are attached to the skin through a peduncle or stalk.

Can Skin Tags Be Dangerous?

No, skin tags are not dangerous. They are harmless benign growths, which can be aesthetically unpleasing. You can easily get rid of them through home remedies or you can get them removed surgically by a doctor.

Skin tags are more commonly seen in people who have diabetes as compared to otherwise healthy individuals. But, the presence of a skin tag is not a sign of diabetes.

Can Wart Remover Be Used On Skin Tags?

It is best to consult your doctor before you try to remove the tag on your own, as it can result in infection or scars. There are a lot of wart and skin tag removers available commercially. Always use them after consulting a dermatologist first.

I have little genital warts in my vagina and worried that it could be VPH. Please help.

Query: Hello doctor, I have a few and little genital warts in my vagina. I can send you a picture if you want, I am very worried that it could be VPH. Please help me.  Read Full »

I have inflammation and burning sensation in my anus after having intercourse. Is this HPV?

Query: Hello doctor, I am a 24-year-old bisexual male. 10 months ago a friend stroked his penis between my thighs, and suddenly his penis slipped and entered my anus for merely an inches, and he pulled out then we stopped performing it. And after four months I got constipation and hard stools, and then da...  Read Full »

How to Remove Warts on Your Face?

Query: Hello doctor, Small skin warts are spreading on my face and neck drastically. Can you please suggest the cure for this kind of a virus infection? It started one and a half months back. But, I only recently realized that it is multiplying.  Read Full »

Do you have a question on Human Papilloma Virus or Obesity?